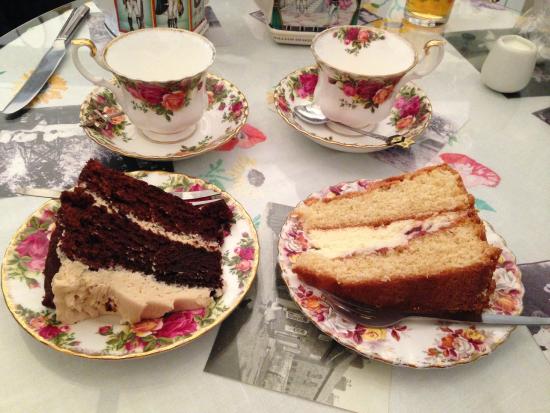 Bunty’s Tea Room on Steep Hill in Lincoln has been recognised nationally by winning the Best Events/Service Provider title in the National Vintage Awards. Matt Felgate and Jenny Lock opened their diminutive tea room three years ago and have created a vintage paradise on Steep Hill. Bunty’s is easy to find as it’s the tea room with the queue out the door waiting for a table. All the food is freshly prepared with new cakes being made weekly: the Pimms O’Clock cake has been a real crowd pleaser this summer, along with retro classics such dandelion & burdock, and even a tomato soup cake!

Sim Bellandini, owner of Lincoln’s Café Portico (part of Great Food Club’s recommended network), has been working on a special – and delicious – side project with his friend Adam from VDuo Motorcycles in Lincoln. They have built their own wood-fired pizza oven housed inside an authentic Italian Piaggio Ape. The inaugural pizza evening in July was a roaring success and Sim plans to expand the offer and host more pizza and jazz evenings in the near future.

A 15th century pub on Lincoln’s High Street is on the up after being leased by local businessman Rupert Abbot. The three-storey grade II listed building will retain its name The Cardinal’s Hat and will generate 25 jobs. The plan is to offer a range of dishes, sharers and bar snacks sourced from artisan producers, as well as serve a large selection of beers, guest ales, wines, ciders and spirits.

Uncle Henry’s in Grayingham has launched regular speciality nights on the last Friday of the month. They include steak night, sausage evening and curry night. The aim is to showcase not only the farm’s home-grown produce but local artisan producers, too.