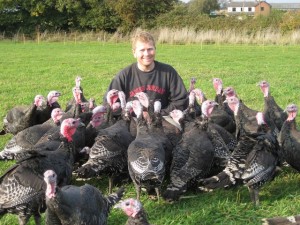 A Leicestershire poultry farmer produces some of the tastiest chickens in Britain, says the Independent newspaper.

Fosse Meadows Farm of Frolesworth, near Lutterworth, was named in an article published on March 19 entitled ‘Are designer chickens worth the money?’. Its chickens were given a score of nine out of ten as part of a taste test.

The only producer to score more highly than the Frolesworth outfit was Poulet De Bresse of the Rhone-Alpes, France, whose chickens are sold at Harvey Nichols, Knightsbridge, London. 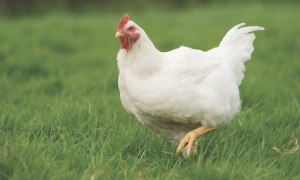 One of Fosse Meadows’ roaming chickens

Nick Ball of Fosse Meadows Farm said: “We were very happy to receive some impromptu PR in The Independent. The article is essentially saying that our chicken is the tastiest in the gourmet chicken market and second only to the Poulet de Bresse.”

“We currently sell from the farm gate and supply only a small area in South Leicestershire, with stockists such as Farndon Fields, Attfields Farm Shop and butchers Chapmans, Ringrose and Waterloo Cottage. However, we are now ready to expand further afield into Leics and Rutland.”