Making cider at the Artisan School

Yesterday I attended an Introduction to Cider Making short course at The School of Artisan Food on the Welbeck estate, north Nottinghamshire. Inspired, I am now on the hunt for windfalls.

The course, run by the very knowledgeable Simon Reed, founder of Kent orchard and cidery Rough Old Wife (nothing to do with his other half, he was keen to point out), was fantastic at putting cider into context. Today we see the drink as fun, a luxury – we’ve all taken home a flagon of Knee Trembler after a West Country holiday, or enjoyed a pint of the posher stuff that’s popular today (did you know, according to SIBA’s latest report, that cider sales have outgrown those of lager?). But cider is actually fundamental to the history of these islands. 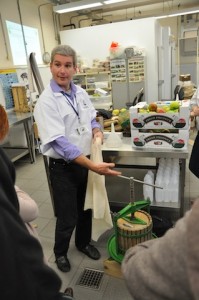 Simon Reed with an apple press

As many as 900,000 acres of English land were given over to the growing of apples, mainly for cider making, in the 17th, 18th and 19th centuries. That’s the largest use of land for any arable agricultural purpose.

Why? Because back then cider was the difference between life and death for the average worker and his family. Water was often too risky to drink. If the dead sheep upstream didn’t get you, then the rotting rat at the bottom of the well probably would. A good supply of apple juice combined with water and left to ferment ensured that you and your kin had something to drink that wouldn’t kill you. Workers were often partly paid in cider. 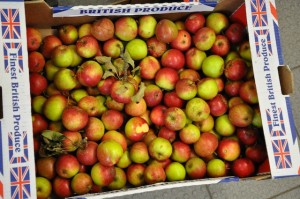 So was everyone drunk all the time? Not exactly, because employees gave their workers cider, not cyder. Cider (with an ‘i’) was the second pressing of the apple pulp, with added water. The liquid was left to ferment, to kill nasties, and because there was less sugar in it, the final brew was weaker – around 3%.

Cyder (with a ‘y’) on the other hand was the real thing – the first pressing with no added H2O. This contained more sugar, and therefore the finished product was thoroughly knee-trembling, at around 7-13% alcohol. 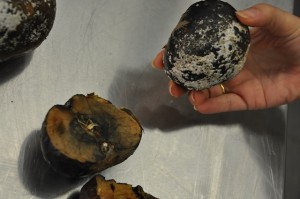 Apples this far gone are fine to use to make cider – no animals and no poo are the only rules!

The course also covered the many old wives’ tales surrounding cider. Some of you might have heard myths about dead rats in cider. There is an element of truth to this. Because it was crucial to have cider, you had to have a successful fermentation, otherwise you were dicing with death. If your cider wasn’t fermenting, the way to ensure the process started was to introduce something rotten.

The practical side of the course was good too, and I now have a working knowledge of how to make cider. It’s a refreshingly basic process, and you can use any apple to make the stuff, not just cider apples, but it’s a good idea to know where they’ve come from. The key thing is that the fruits need wild yeast on their skins to kick off the fermentation process, so avoid sprayed apples. 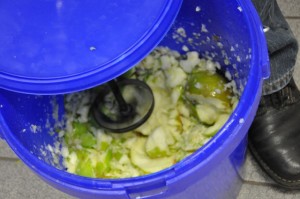 Before you press your apples, you need to mash them up. The cheapest method is to use a drill with a multipurpose mixer attachment

As for The School of Artisan Food itself – it’s hard not to be impressed. I found it thoroughly inspiring and, in addition to the well-thought-out teaching, it’s a place that has the potential to reconnect you with the fundamental business of making food and drink – a process from which we have rapidly become detached in the 20th and 21st centuries. The lunch is pretty damn good too. 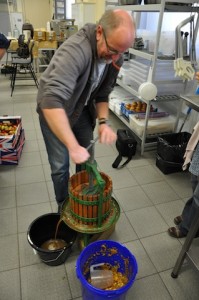 After mashing your apples, you extract the juice from the pulp using a press

Great Food Club members can get 10% off the price of short courses at The School. Join the Club here – it’s currently free. 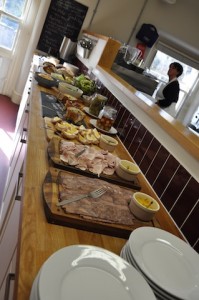 The lunch provided was superb