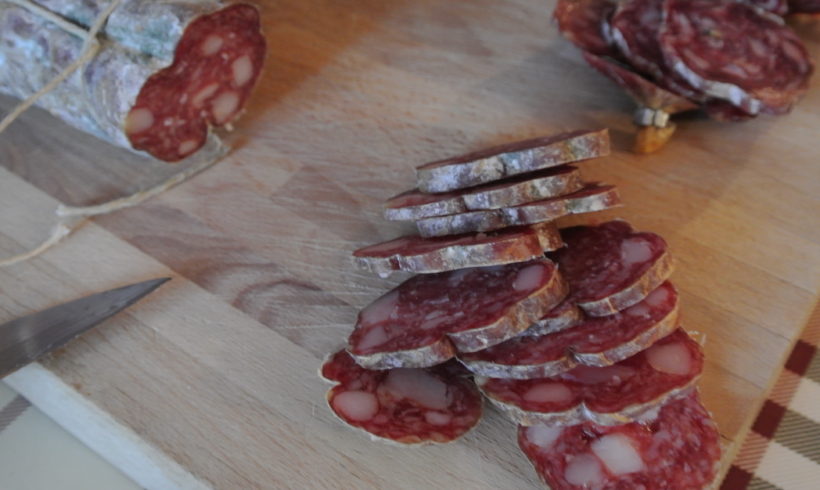 The Rutland Charcuterie Company is a producer with a mission: to bring the art of smoking and drying meats to the East Midlands. In his blog for Great Food Club, founder Nick Brake tells us about his journey from learning all about Charcuterie in the Alps to opening up a local food company.

Or perhaps in our case it should read “I went, I saw, I conquered the art of salami making”!

I often get asked how I came to be making charcuterie here in Rutland. The general answer is that having lived in the French Alps and being exposed to a huge amount of different charcuterie on a daily basis, when we came back to live in Rutland we thought that there was no reason why we couldn’t give it a go here. I studied for my Diploma in Butchery and Charcuterie at The School of Artisan Food during which time I was fortunate to have the opportunity to visit Italy to attend a four day Advanced Salumi Course. This really focused my determination to make a success of setting up our own charcuterie company at home.

We had the opportunity to work with a number of experienced Italian norcini (pork butchers) – learning the practical, as well as the theoretical elements of making a variety of Tuscan salumi (salamis and other cured pork products). Just watching these artisan producers, with the love, care and attention to detail they put into every aspect of the production process was an inspiration. 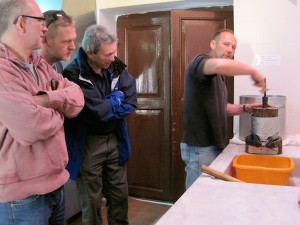 Recipes have been handed down from generation to generation. Even though just a few kilometres apart, each norcino had different recipes and methods depending on regional variations and their family traditions.

As well as salami making it was a joy to see lardo being made in marble baths, and also the wonderful rolled pancetta. And absolutely no part of the pig goes to waste:

Soppressata Toscana (similar to braun) uses the leftover parts of the pig, including the head which is boiled for several hours. Once cooked the meat (including the tongue) and skin is removed, chopped and seasoned before being filled into a large (very large!) casing. The cooking liquid which is high in gelatine is added to bind everything together.

Biroldo is similar to Soppressata but uses the blood. It is stuffed into stomachs before being tied off and cooked in the head stock. 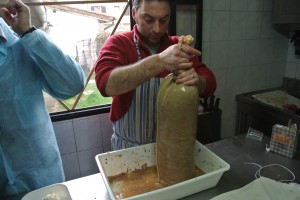 Grassetti are the crispy residue of producing lard which are pressed to remove as much liquid fat out as possible. The result is crispy flakes which, once salted, are rather addictive!

I was even introduced to Salsiccia – a raw sausage. I can tell you that it was with some trepidation that I took my first bite, there was just something not quite right about it! It was just against everything that we are accustomed to here ie properly cooking a sausage to make it safe. I must say that it was actually delicious, though I still haven’t tried it here!

I was surprised that the majority of butchers that we visited were using a salami cabinet to get their salamis through that critical fermentation stage. I had always had the image of them hanging directly in La Cantina (the cave). I assumed that it was enough just having the right climate but I guess that problems with Clostridium botulinum in the past had made them all a little wary.

So, back home it became clear that salami making was totally possible. The various cabinets we now have allow us to confidently produce a totally safe and consistent range of British Charcuterie, whether that be the salamis or our other air-dried meats. Now we just have the challenge of developing something completely British!

We have some of the best livestock in the world and investment into the latest technology enables us to make product to rival the best that is on offer on the continent. And it all comes with our three core principles: Provenance, High Welfare Standards and of course Great Taste. Why not give them a try?

Our product range now includes salamis and other air dried meats including bresaola, coppa and noix de jambon.
You’ll find us at:

Or why not come and see us and pick up some goodies direct from the cellar door (Fridays til 5pm, or by appointment at any other time. Please phone beforehand if you are looking for something specifically).