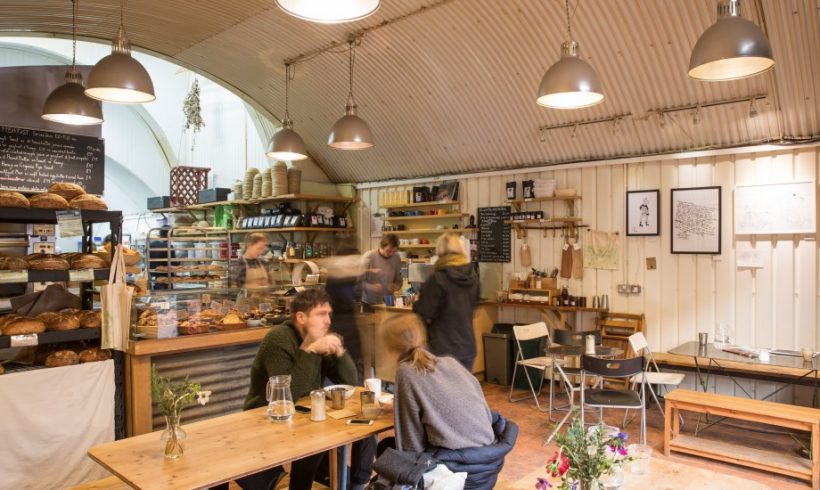 Next time you’re in London, check out these superb independents

Small, independent food businesses such as artisan bakeries and family producers are becoming increasingly treasured in our Capital. Nestled in local communities throughout the city, London is peppered with these gems, each offering unique, high-quality food and drink that’s far more appealing than mass market fare. While there are hundreds of food independents in London, Great Food Club has been out in the smoke to find six that are well worth a visit.

The Deli…
De Beauvoir Deli
With chequered tiled floors and porcelain pans hanging from the ceiling, walking into The De Beauvoir Deli is like entering an old friend’s kitchen. The unconventional décor is quirky and characterful, making De Beauvoir truly unique. An eclectic mix of artwork litters the walls between hand-painted shelves and cabinets displaying a range of artisan products from preserves to pestos and nut butters, giving a home-from-home feel. A small seating area at the edge of the space offers seating for those with time for a relaxed lunch, while freshly filled sourdough sandwiches are ready for those on the go. Choose from quiches and scotch eggs, cakes and cookies baked daily – all made in-house using locally sourced ingredients from Hackney and Islington.
98 Southgate Road,
London, N1 3JD

The Bakery…
E5 Bakehouse, Hackney
Hidden away under the Hackney train lines, E5 Bakehouse is a trendy bakery-cum-café that has become an arty hub for local students and weekend coffee drinkers. Beyond their counters displaying oven-warm cakes and tray bakes (the upside-down plum cake is a must), your eyes are drawn to the bakery’s bustling kitchen beyond. Still making their sourdough loaves using a traditional 48-hour fermentation, the bakers work in organised chaos among bags of flour and tables of chatty customers, reflecting E5’s transparent, honest ethos. Dog-friendly and with bags of character and warmth, it’s the perfect stop.
Arch 395, Mentmore Terrace,
London, E8 3PH

The Restaurant…
Korova Restaurant, Tufnell Park
The name ‘Korova’, meaning ‘cow’ in Russian, refers to the butcher that used to occupy the shop where this family-run neighbourhood restaurant now stands in the heart of Tufnell Park. Head chef and owner Steve Wilmot uses seasonally sourced ingredients to create simple yet delicious modern European food. Featuring both classic and contemporary flavours, the ever-changing menus are rewritten daily on blackboards reflecting Steve’s commitment to seasonality and localism. A café by day, serving up a Mediterranean-style brunch, Korova transforms into a restaurant/cocktail bar by night, where fresh blends of simple locally sourced ingredients remain the stars – from risotto scorzonera and honeyed figs to heirloom tomato and nduja salad with fresh marjoram. Delicious.
9 Campdale Road,
London, N7 0EA

The Pub…
The Carpenter’s Arms, Hammersmith
Tucked away in Hammersmith, this cosy gastro pub serves great seasonal food with unaffected charm. The modish, Mediterranean-style menu features untainted British produce from Mersea Island mussels to Berkshire pork, paired with other locally sourced ingredients. With a secluded courtyard at the back and a large selection of wines by the glass, whether you’re eating or just out ‘for one’, this unpretentious pub makes everyone feel like a local.
91 Black Lion Lane,
London, W6 9BG

The Producer…
Newton & Pott Jam, Hackney
Having been upgraded from its humble origins in Kylee Newton’s East London flat back in 2012, six years on and Newton & Pott products can now be found on shelves and in pantries all over London. Using fresh, seasonal ingredients, Kylee uses artisanal methods to create novel and sometimes exotic flavours. From pear and lavender jam to za’atar cauliflower and toasted tomato ketchup, she recreates classic British, as well as foreign flavours; so, whether you’re looking for a cake filling or a toast topping, Newton & Pott is worth seeking out.
Unit 2B, Regent Studios,
8 Andrews Road,
London, E8 4QN

The Street-Food Stall…
Monty’s Deli, Old Spitalfields Market
With food markets like Borough and Spitalfields now becoming the weekend destination of choice for foodies and beer-drinkers alike, Londoners are spoilt for choice when it comes to independent street vendors. Featuring everything from macaroni cheese carts to goat meat kebab stands, food markets have become an open arena for producers – both local and international – to experiment and share their creations. One such stand, which can be found amid the bustle of East End’s Old Spitalfields Market, is Monty’s. Serving up their award-winning Jewish Reuben special, consisting of thick layers of salt beef, pastrami and pickles, sandwiched between slices of own-make rye bread, Monty’s has quickly become one of the capital’s favourites. Since being founded in 2012, Monty’s now has a permanent base in Hoxton but can still be found seven days a week at their original stand in Old Spitalfields Market.
Old Spitafields Market,
16 Horner Square,
London, E1 6EW

Mia is a graduate living in West London with her boyfriend. By day she studies for a diploma in food & wine. By night she can be found out and about in London – usually close to or in a local wine bar.