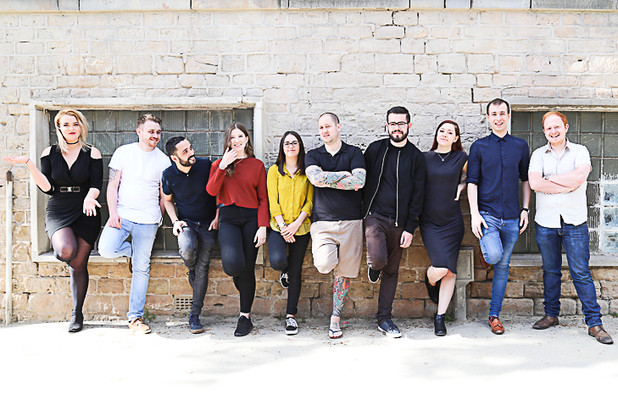 We first told you about Alchemilla in Nottingham back in November 2016, here. If you haven’t read that article yet, we recommend you do as it gives a real flavour of the ambition and scale of this exciting project. Here’s an update…

There are now just two months to go until the planned launch. Alchemilla, the brainchild of chef Alex Bond, will be located at the top of Derby Road in Nottingham, occupying a former Victorian coach house. The space has not been used for over 100 years and so is currently undergoing extensive renovation. The finished restaurant will seat 40 people with an extra ten at the chef’s table. The builders have carved through the sandstone at the rear of the building to make more space for the restaurant interior, with scope to add exciting new elements to the restaurant later, including an upstairs drinks terrace.

Alex wants to create Nottingham’s next Michelin-starred restaurant and he is focused on crafting a beautiful venue with carefully curated menus, full of fresh seasonal produce. Alex has a wealth of experience gained in some of the country’s best restaurants, including Anthony’s restaurant in Leeds, Restaurant Sat Bains (two Michelin stars), Auberge du Lac with Phil Thompson (one star), Turners in Birmingham (one star) and The Wild Rabbit in Kingham (one star). Since August 2015 he has also been running his Supper Club and events all over the country.

Alex has now assembled his full team, who join him with the energy and passion needed to breathe life into Alchemilla. The team include talented sous chef Liam Sweeney, who has fine-tuned his culinary skills in restaurants all over the world, and sommelier Sam Walker, who has bought a fresh new perspective to the wine list. Grace Bond will be responsible for creating Alchemilla’s signature drinks and juices to complement the food menu.

Alex said: “I know modern British is a cliché, but that is what Alchemilla is all about. I don’t believe we should eat as much meat as we do and so I have developed a style of cooking that is plant based. Vegetables can be just as good as any piece of meat, I’d like to show the depth of flavour that you can achieve when you allow vegetables to take centre stage, with a few supporting ingredients.”

The menu will be accompanied by a carefully selected wine list with bottles from all over the globe, as Alex explained: “We really want to give our guests something different and to surprise and delight them with the flavour combinations and wine pairings. My sommelier Sam has helped us to source some beautiful wines made from well-known grape varieties, but from exciting lesser-known wine growing regions, such as India and Patagonia.”

Alchemilla will open for lunch and dinner. The lunch menu will comprise of a selection of small plates as well as a choice of three tasting menus, two tasting menus will also be available at dinnertime . Alongside designing the menus, building relationships with local producers and recruiting a full team of staff, Alex is involved in every aspect of the restaurant creation from working closely with the carpenters on the design of the bespoke walnut internal doors, to the gardeners on the living wall which will frame the entrance.