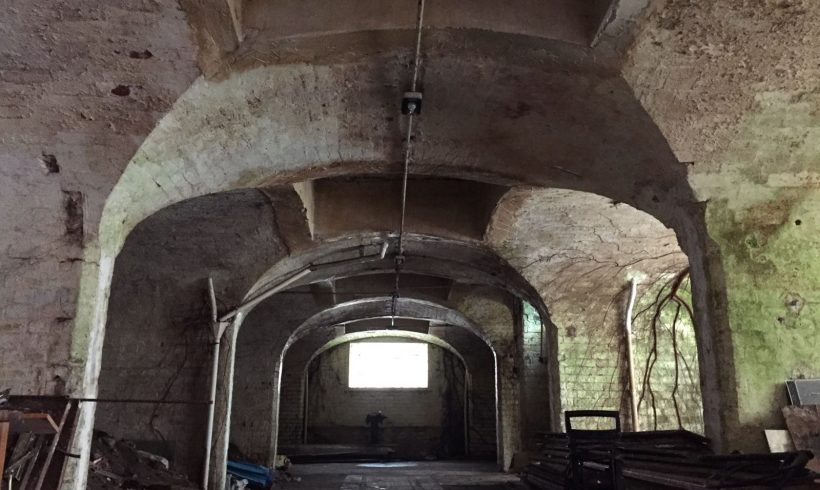 Will this derelict Nottingham building soon be the UK’s most exciting restaurant?

More exciting things are happening on the Nottingham restaurant scene. The city has a dynamic and varied food and drink offer, with chains and independents competing for increasingly discerning customers. Amongst all the noise and hustle and bustle, something very exciting indeed is emerging on Nottingham’s Derby Road.

Alex Bond has worked in kitchens since he was 15 years old when he started part-time as a pot Washer. Hard graft, talent and determination saw Alex, originally from York, work his way to 42 The Calls with Jeff Baker, then on to Anthony’s as a sous chef, and then to Nottingham’s Michelin-starred restaurant, Sat Bains in Lenton. From there Alex moved to Auberge in Hertfordshire and then became head chef at Turners in Birmingham. After two years at Turners, Alex is ready professionally and personally to start his own venture.

Quite a lot has been written about Alex (not least that he worked at El Bulli – which he didn’t) and his plans. The new restaurant, which we can exclusively reveal will be called “Alchemilla” (more of that later) will focus on modern British cuisine. Alex is keen to ensure that 80/90% of the produce he uses is British. Local food will be sought out, but Alex pulls no punches when it comes to his vision… he wants only the very best produce available. If that can be found locally then great, but if not then Alex will go further afield and he makes no bones about it. As for “seasonal”, well, it is hard to find any decent (or even mediocre) restaurant these days that doesn’t emphasise the use of “seasonal produce” but as Alex says – “all your ingredients should be seasonal, if they’re not, and you’re using strawberries in December, what are doing?” 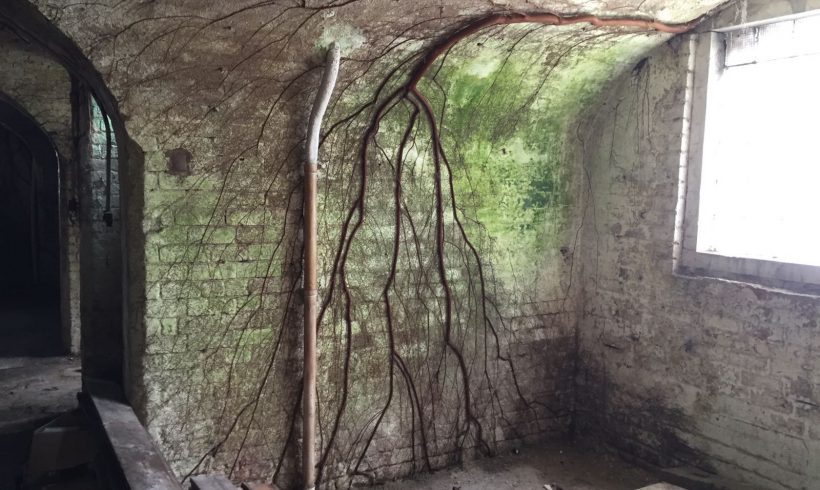 Alchemilla will use modern techniques and flavour combinations combined with classic cooking to offer customers something exceptional. It is due to open in spring 2017.

There is something else outstanding about Alex’s project. If you have ever opened your own restaurant (and I have) you will know it is a huge task to take on, especially if you are starting from scratch rather than buying an established business. You can prepare all you like, with plans, drawings, designs and hopefully a solid budget, but there will always be surprises, price increases and unforeseen calamities. For most then, the idea of taking on a stone-built former stabling block that has been standing empty since 1840 (yes, empty and unused for 176 years) would be dismissed as the ravings of a madman. 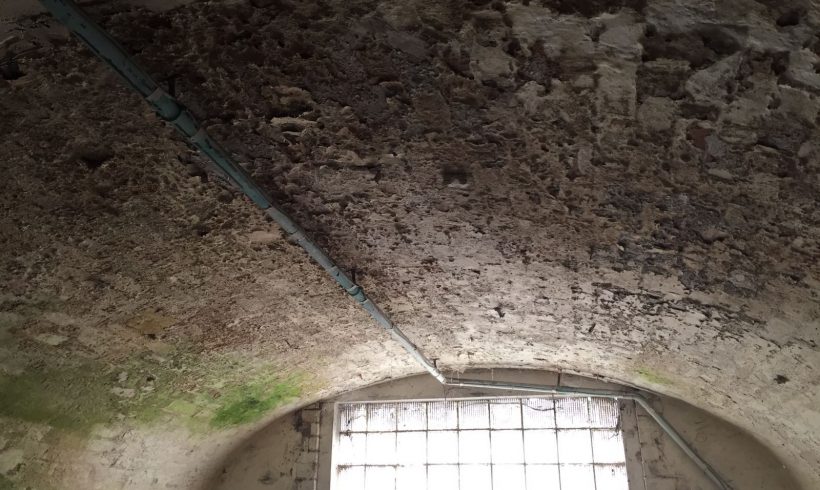 Alex was clear he wanted to be based in Nottingham. He originally looked at buildings in the city centre, including a disused car park, but couldn’t quite find the right location or building style for the right cost.

That changed with the discovery of a former coaching house at the front of a large former lace merchant’s house on Derby Road. This incredible building is 3000 square foot of history. Inside the stone exterior, horses were stabled, but from the architecture it is entirely possible that the building has been around for many hundreds of years and used for various purposes, many of which we can only speculate on. Numerous arches with original stable fittings create a cavernous and atmospheric interior. Some of the arches are partially bricked up and some are shorter than others, with hidden rooms and spaces behind them, with dark, narrow corridors and ginnels that lead back into the Nottinghamshire sandstone cliffs, blocked with rubble, hiding who knows what. Some are rumoured to stretch across the city and back to Nottingham Castle.

There are old rail tracks, different floor levels and different floorings, from Victorian brickwork to clay tiles, concrete, stone and earth. The interior is dark and enigmatic – what stories this building would be able to tell. 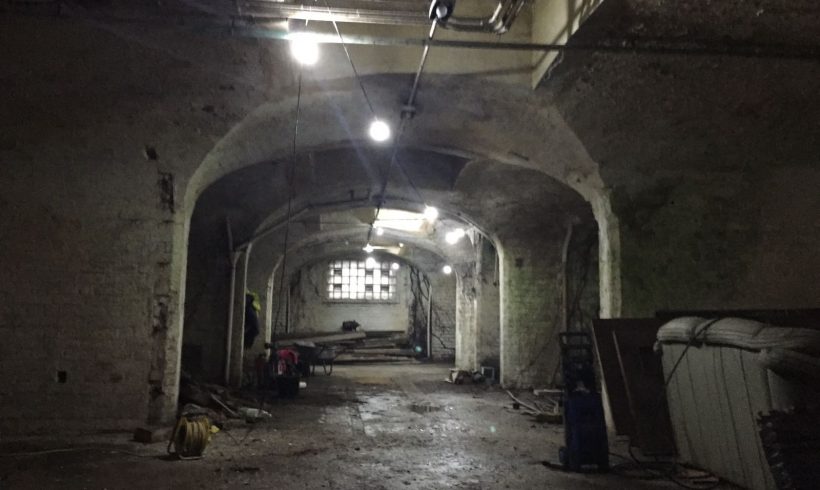 It is flat-roofed and on that roof is a garden, with trees and foliage in abundance. Over time the tree roots have encroached into the building where they cling to the brickwork of the arches like serpents searching for prey. There is very little natural light, the roof leaks, the whole place is damp and covered in moss and foliage. Alex is clearly not a man afraid of a challenge. He talks about his vision for this amazing space, this architectural gem of a building hiding in plain sight at the top of Derby Road, with great passion and clarity.

The original stable doors will be retained as the entrance. As you walk in, the natural slope of the floor down towards the rear and the arches will provide your first sight of the open-plan kitchen, specifically designed to enable uninterrupted views of the chefs at work.

Inspired by seating at the Serpentine, Hyde Park, wooden seats will curve around the central space, some of the tree roots will be ‘petrified” to retain them, and sky lights will open up the roof space to allow a flood of natural light. The roof garden will be transformed into an urban garden hidden from the busy traffic of Derby Road. The gardens will contain a variety of flowers and grasses and of course, “Alchemilla”, also known as Lady’s Mantle.

As Alex says, with some understatement, he has “a lot to do”. The team of designers, gardeners, architects, planners, technicians, plumbers, kitchen designers, electricians and even a potter (watch out for his bespoke crockery) will be working flat out to transform this stunning space into one man’s amazing vision for his first restaurant. With Alex’s talent for food and this astonishing and unique building, it is hard not to imagine that Nottingham may be heading for its next Michelin-starred restaurant. And perhaps not only that – as Alex says: “I don’t want to work 16 hours a day to be the best restaurant in Nottingham, but the best in the country.”

Well, if any one can do it, I imagine Alex Bond can.

If you would like to try Alex’s food ahead of the opening, you can join his supper clubs, held two weekends a month at Wired Cafe on Pelham Street, Nottingham, with a five-course meal starting at £35. Details are on their website.

Read an update on Alchemilla here.