In a county full of pretty villages, Medbourne and Hallaton are two of Leicestershire’s most attractive. With its burbling brook, 14th century church and village shop, Medbourne is about as cream tea English as you can get. Someone’s put a dovecote in the pub car park – that’s just the sort of place it is. 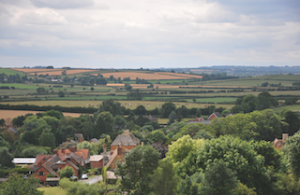 Hallaton, just a few miles north, is equally pleasant, with all sorts of fascinating features like old village water pumps, a green with 17th century buttercross, and a Manor House. Hallaton is just as steeped in history as its village rival (these two like a bit of rough and tumble – see below) and both places are the stuff of archeologists’ fantasies, with evidence of substantial Roman settlements found on their doorsteps. 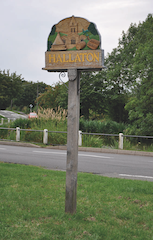 Being close to the Northants border, many of the houses in both villages are built using honey-coloured Northamptonshire ironstone, which gives out its trademark warmth. Have a look at the picture of the Nevill Arms if you’re wondering what we’re on about. 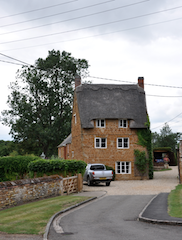 This exceptional walk allows you to explore both Medbourne and Hallaton, their lovely pubs, and the villages of Nevill Holt and Blaston, too. 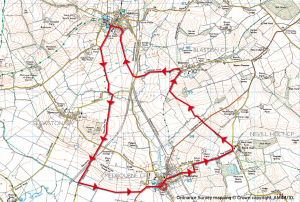 Click on the map to get a larger version

1 Park on Main St, Medbourne, near the village hall. Find the church and head up Rectory Lane, opposite, which turns into a grassy path. Go through two gates, cross the road and walk up through the fields opposite – go diagonally right and walk towards a faintly visible faded yellow marker. 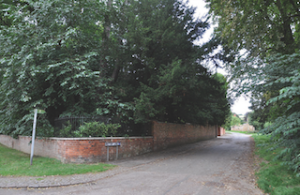 2 Go over the stile, turn left and walk uphill towards the buildings. On reaching the farm, go over the stile and through the yard of Nut Bush, straight on to the yellow marker. It feels like you’re walking through someone’s backyard, but it is a public footpath. Just before the farm’s main entrance, take the path through the field on the right to reach the road. Hop over the wall – don’t worry, it’s not high – turn right and walk along the road to Nevill Holt, going through the large gates.

3 Turn left at the end of the road and where the brick wall finishes, go left through a gate to cross an arable field to find a yellow marker. Go into the next field, following the marker arrow, and walk downhill along the edge of the field. Cross Uppingham Road and follow the bridleway sign into another field and towards the next marker. 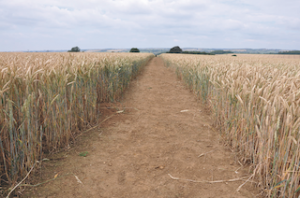 4 After a strip of trees, go left and through a gap in the hedge, then up the right side of the next field to a marker. Here veer diagonally left across the top field – aim for the solitary tree on the skyline. At the far corner, drop down to join a track. Here you can shorten the walk by turning left back to Medbourne. Or for the full-length walk, turn right and walk the track into Blaston. 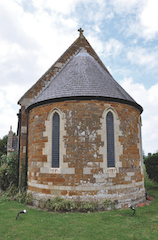 5 At intriguing St Giles Church, turn left and follow Hallaton Road for about 1km to the junction at the end. Go straight over and ahead to the next yellow marker before turning right to walk through pasture towards Hallaton. Follow the yellow posts, aiming first for Hallaton church spire, then to the right of a clump of trees in the middle of the field, and cross a footbridge. 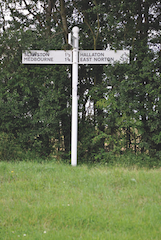 6 Go left then sharply right beyond the next stile and follow signs through a housing development. Eventually turn left on to Medbourne Road and go straight on to reach the centre of Hallaton and the Bewicke Arms for a well-earned drink. 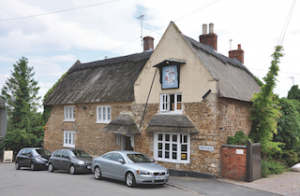 7 Leave Hallaton via an arched passageway underneath a house, just along from the Bewicke Arms, almost opposite the buttercross. Go down the grassy path between two walls, cross a footbridge and go directly up a gently sloping field, going straight on up the hill and aiming just to the right of a wooden fence beneath trees. 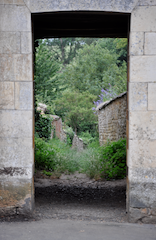 The arched passageway mentioned above

8 Go through a gate and turn left for a wide track marked Macmillan Way. Go down the track, and through a gate, before continuing along the edge of two gated fields, then left into a single-track road. Turn right at the first bend and continue along the track.

9 At a road junction go straight over and down a single-track road. Around 500yds beyond the old railway bridge, turn left at the bridleway sign. 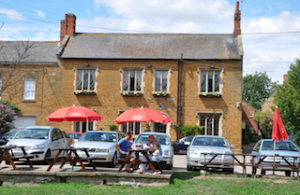 With a pretty brook to the front of the Nevill Arms, this pub is in prime location for a spot of late-summer sun with a pint or glass of wine. There are three ales on offer: Greene King IPA, London Pride and a regularly rotated guest beer, which at the time of writing was Wadsworth 6X.

The Nevill Arms has made a real effort to offer more than a traditional pub and this shows in the food – you’re utterly spoilt for choice. There’s a Riverbank Menu for brook-side dining, but – and this is where it gets interesting – you can also get stuck in to a Breakfast Menu, Breakfast Takeaway Menu, Dining Menu, Sunday Lunch Menu, Children’s Menu and Cafe Nevill Menu. Crikey. Not that we were complaining.

We chose Cafe Nevill – located behind the traditional part of the pub. Attaching a cafe to the pub is a great idea as it offers flexibility and a good option for families looking for a fresher, more modern dining experience.

At Cafe Nevill you can choose to sit in the large garden courtyard, where potted flowers abound, or inside, where there’s plenty of comfy seating. Food here is excellent – my Cajun chicken salad was bursting with juicy, green, herby olives and sundried tomatoes.

Resist the homemade cakes if you can. 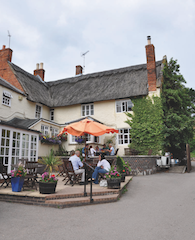 The Bewicke Arms is located in the centre of Hallaton near the village green and buttermarket. To the rear is a good-sized garden and small children’s play area.

This is another country pub that’s cleverly evolved to cater to a larger market by offering tea, coffee, cakes and snacks alongside beer and more substantial bar meals. Like its Medbourne counterpart above, the Bewicke Arms has introduced a separate cafe, this one combining a tea room and gift shop. Here, as well as enjoy a cream tea, you can stock up on local jams or browse a small selection of craft-type items. The tea room is located in a separate building to the main pub.

The pub itself is characterful and cosy inside, with exposed beams to match the thatched roof. Three ales are available, including one guest – Cornish Doom Bar on last visit.

We ate a very acceptable quiche with salad from the tea room but if you want a larger meal, you won’t be disappointed. Examples include Dijon pork cutlet in apple and calvados cider cream and pan-roasted sea bream with asparagus and red pepper risotto.

Nevill Holt Hall: Grade 1 listed Nevill Holt Hall dates back to 1300. Writer and political activist Nancy Cunard was born here in 1896. In 2000 it was restored and a 300-seat theatre added. Opera performances are now commonplace. 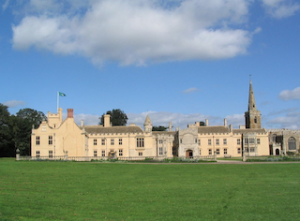 Hare pies and bottle kicking: It’s impossible to mention  Medbourne and Hallaton without describing the bizarre custom both villages get stuck into each Easter Monday. Like all the best British traditions, it involves beer, food and a good, old-fashioned scrap.

Called Hare Pie Scrambling and Bottle Kicking, the event essentially consists of teams from Hallaton and Medbourne meeting on a hill and wrestling to get a small barrel over their own boundary stream. The tradition also involves eating hare pie.

The book Hallaton, Hare Pie Scrambling & Bottle Kicking by John Morison and Peter Daisley has all the details.

Hallaton treasure: In 2000, a group of walkers strolling near Hallaton stumbled across a few old coins in a field. After a bit more digging, the field turned out to be hiding one of the most significant Iron Age/Roman sites to be discovered in recent years.

Some of the oldest coins ever discovered in Britain – dating back to the Iron Age – were pulled from the site, along with 5,500 silver and gold Roman coins and a Roman cavalry helmet.

The story of the treasure haul is currently on display in Hallaton Museum, just a short walk from the village green. 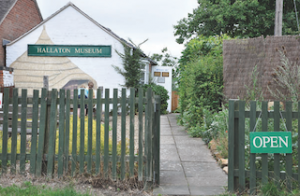