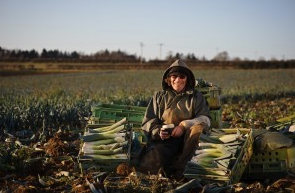 We visit Riverford at Sacrewell Farm

A lonely figure sits in the field, illuminated by November’s golden morning sunlight. He sips tea, blows into cupped hands, bends, grasps green ribbons and pulls. Out comes the prize, followed by a tangle of roots, dripping earth. A blade flashes, the muddy tangle hits the earth and a trimmed leek lands on the pile.

This is unforgiving, back-breaking work but farm worker Dick Mace from Wisbech seems happy. “I’ve been grafting in fields like this for 30 years,” he grins.

One warming thought is that around 72 hours later, the leeks that Dick is handpicking – along with other veg grown at Sacrewell Farm near Peterborough – will be simmering in saucepans across the Midlands. 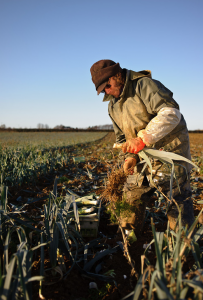 Since 2008, 500-acre Sacrewell Farm has been run by Riverford Organic – note the word organic – a farming and food delivery business that was born in Devon. It was set up in 1987 by Guy Watson who delivered food grown on three acres to 30 friends. It’s grown a bit since then and now delivers 40,000 boxes a week across the UK. 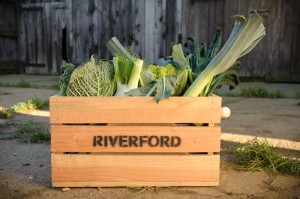 This is big business. But Riverford has never lost sight of its roots – growing affordable veg for local people – and as it has expanded, it has charted a more challenging course to stay true to its principles. First, Riverford is organic – so no chemicals. As a result, it has to contend with lower yields and pests such as white fly.

Second, to reduce food miles and keep the farming relatively small scale, the company decided to link up with sister farms across England – in Hampshire, Yorkshire, and here, at Sacrewell near Peterborough. So Riverford sprouts delivered to, say, Melton Mowbray, are grown a few miles away at Sacrewell. 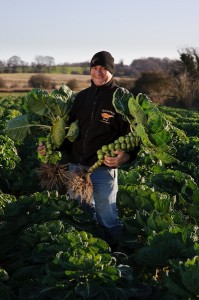 Nigel Venni from Peterborough, farmer at Sacrewell, shows us around the land. “We grow Megaton, Belton, Darwin, Kenton and Galvani varieties,” he says, pointing to the leeks surrounding Dick. “There’s purple sprouting broccoli, there’s the wet garlic we planted at the end of October just poking through, and next door are cabbages – January King, Tundra Green and Wintessa Savoy. We grow lots of varieties of the same vegetable for a couple of reasons. First, the soil at Sacrewell varies dramatically, even within individual fields, so we try to match vegetable variety to soil type. Second, it means we haven’t got all our eggs in one basket – if Darwin doesn’t do too well, then Belton can come to the rescue.” 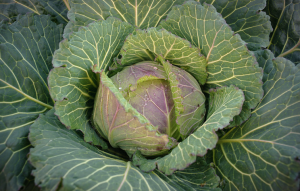 Everything is harvested by hand at Sacrewell. The 7000 or so veg boxes per week that are packed in the farm’s cold store and then distributed across the Midlands equate to between one and two tonnes of produce. This entire quantity is picked by four workers.

One of those is Dick Mace, whose silhouette moves slowly around the now-distant leek field, straight into a biting northerly. Seeing this wintry scene puts you in touch with the reality of organic farming, and the time and effort needed to put those delicious leeks in your pan. 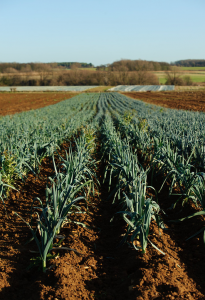 Riverford’s meatbox
Riverford is now able to deliver organic meat boxes as well as veg boxes. Its small meat box costs £53.95 and will feed two adults for at least a fortnight, while the Winter Warmer box – containing cuts perfect for slow cooking – is £29.95. All the meat is currently sourced from West Country farms. In the future, Sacrewell Farm may become home to livestock: “The land is available,” says Nigel Venni, “but it’s not possible economically at this stage.” 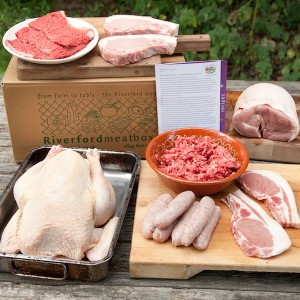 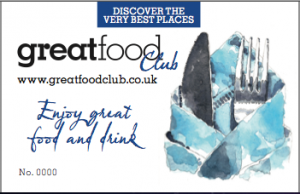