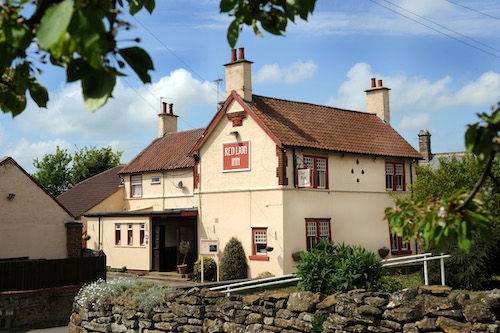 Nestling in the sleepy little village of Newton, just a mile or so off the busy A52 not far from Grantham, The Red Lion has long had a solid reputation as a decent country eaterie. It’s one of those places we’ve been meaning to visit for a while, but never quite got round to it.
Finally, a relative’s birthday provided the ideal opportunity and nine of us (including four hyperactive kids aged between four and 12) were there early doors on Saturday night – it was the only slot we could get as the pub was booked solid for the rest of the evening.
New(ish) landlord Phil opened up early for us and dispensed drinks and menus then joined us for a chat as we sat outside in this quiet, leafy oasis amid the rolling farmland freshly shorn of its cereal crops. Together with his wife Sharon, Phil has rebooted the Red Lion over the last 12 months – reclaiming its status at the hub of this rural corner of South Lincolnshire.
The menu is quite eclectic with something for everyone – from sharing platters of cured meats and mozzarella, to crayfish cocktail or home-made soup for starters, gourmet burgers, fish and chips, steaks and very substantial salads as mains. Perennial favourites like sticky toffee pudding or a platter of cheeses feature on the ever-changing dessert menu. Our diverse party dived into a wide selection of starters and main courses and demolished everything that was placed in front of us.
The sharing platter of cooked meats, gourmet burger and the smoked duck and quails egg salad were probably the highlights, although the (very) home-made soup and the Grimsby haddock and chips were also big hits. The range of dishes on the menu means that all tastes are catered for and the service was outstanding – as demonstrated by the lovely, smiley waiting staff and landlady leading a rousing chorus of ‘Happy Birthday’ as they delivered our cake to the table, candles twinkling (I won’t mention how many…).
By the time we left, the pub and restaurant were full, with more guests rolling up into the car park. A couple of pricey fillet steaks bumped the bill up to around £24 per head, but everyone (kids included) had three courses and at least one drink each.
It’s not haute cuisine, but it is very well executed, quality fodder at reasonable prices in a lovely setting – it’s the perfect venue for a hearty, unpretentious meal after a lovely leaf-rustling walk through the autumn colours of rural Lincolnshire.