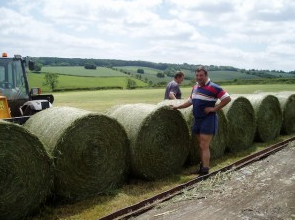 ‘Farming is better than scoring tries’

Left: Julian White on his farm in south Leicestershire

Julian White, the former England rugby prop, achieved legendary status in the eyes of Leicester Tigers fans with his take-no-prisoners attitude on the rugby pitch. So it will come as no surprise that as he moves on to pastures new after an illustrious sporting career that saw him win a World Cup with England, he has shunned a cushy office job to continue putting in the hard graft out in the fresh air.

As we sit down in his house over a cup of tea and a piece of his mother-in-law’s cake, he explains how he came to choose farming as his post-rugby career.

“I was brought up in Devon, and my grandparents and great-grandparents were farmers. When I was 8 or 9 I started helping out on the farm at weekends, and since then it’s all I’ve ever wanted to do.” 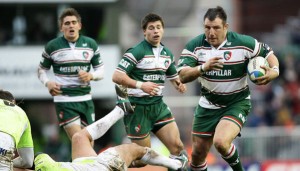 Once the rugby career took off, it was inevitable that farming would take a backseat for a while, but there was no doubt in Julian’s mind that he would come back to it one day. “Really, the rugby enabled me to buy some ground – I managed to save some money and when we came to Leicester we started renting a field, got a few sheep, and built it up from there.”

And built it up he has; Crabtree Farm now commands 600 acres of land just outside Brampton Ash, a village that straddles the Leicestershire/Northamptonshire border.

His wife, Sara, played an important role in his career as a farmer too. “She kept asking me what type of cow I liked, which sounds a bit bizarre, but then one Christmas she bought me a South Devon cow and that was it.” 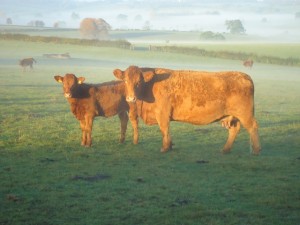 Julian is in no doubt that the breed of his cows has a lot to do with the quality of beef they produce. “South Devon is a native breed, and like a lot of the native breeds they fatten on grass. Rather than finish them intensively at 15 or 16 months old we usually graze them while we’re fattening them and they will be killed at 30 months old. It’s a very natural way of growing them, and it gives more flavour as well. Everyone we’ve supplied so far has been really happy with it.”

So where can you buy Julian’s beef? These days he sells his calves through a friend into the “food chain” as he puts it, rather than selling beef directly to butcher’s shops. In the future he hopes to get back to being able to finish the cattle himself and sell the end product. Still, he recommends Clarkes of Queniborough and Archers in Leicester as two top quality butchers that he has dealt with in the past.

As we chat, Julian’s passion for what he does continually shines through, a glint in his eye appearing when we discuss what he has built for himself and his family. He says this is what drives him to be a good farmer. “I think you’ve got to be passionate about it, as well as resilient and pretty bloody-minded at times.” 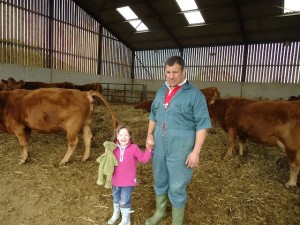 While he grew up in Devon, Julian counts Leicestershire as his home now. “I always intended on going back to Devon, but things change, and this is home now. They’re good people around here.”

When asked about his favourite local pub, Julian insists he’s not that sociable and leaves it up to his wife. Still, as is the case throughout Leicestershire, he has plenty of fine places to eat and drink on his doorstep.

“The White Horse at Stoke Albany would be our local, which does great food, and we also like The Baker’s Arms at Thorpe Langton for a good meal. The Finch’s Arms at Hambleton is really nice as well. To be honest, Leicestershire’s that sort of place – there are lots of nice country pubs.” Having moved around a lot in his career – from Devon, to New Zealand, to Wales, before finally settling on Leicestershire, he says he’d like to settle down now in the area. “I’d like to think that we’ll never move from here now, but you just don’t know. Leicester is definitely our home now.”

Not content with a mere 600 acres, Julian says he’d like to grow the farm in future. “We want to improve the cattle we’ve got – we recently won the regional herd competition, but I’d like to maybe buy some more ground in time.” Whilst he makes mention of the routine of a rugby player being at times repetitive, he says the opposite of farming. “There are always different challenges with farming – there’s a bug or disease that comes in for example, so there are always new setbacks to be dealing with. We want to build a new house in the next few years too, so we’ve got loads of goals.” 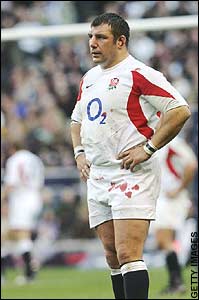 Despite his obvious excitement about the future of his farm, he is still nostalgic about his time at the Tigers. “This is going to sound cheesy, but when you run out at Welford Road and you’ve got 22,000 people there you’re never going to get that feeling again. When you wake up on a Saturday morning feeling those nerves and then you get to run out and release that, it’s a great feeling. I used to watch guys like Graham Rowntree and Darren Garforth running out at Welford Road and, as a young guy farming down in Devon, I never dreamt I would end up playing there. Leicester Tigers isn’t a club for everyone, but if it does click and you do fit in then there’s no better club in the world.”

So many players struggle to find a calling when they quit professional sport. Half an hour chatting to Julian is enough to know that this is not a problem from which he suffers. “I’m looking forward to one day being a grandfather and people will know me as a farmer, but I’ll still be able to reminisce and tell a good story or two. I want to be known as a good farmer who produces quality stock. Nowadays, when people come over and say ‘Crikey, your cattle look well’, to me that’s better than scoring a try.”

That, in a nutshell, tells you all you need to know about where Julian’s passions lie for the future. 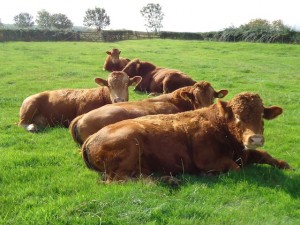