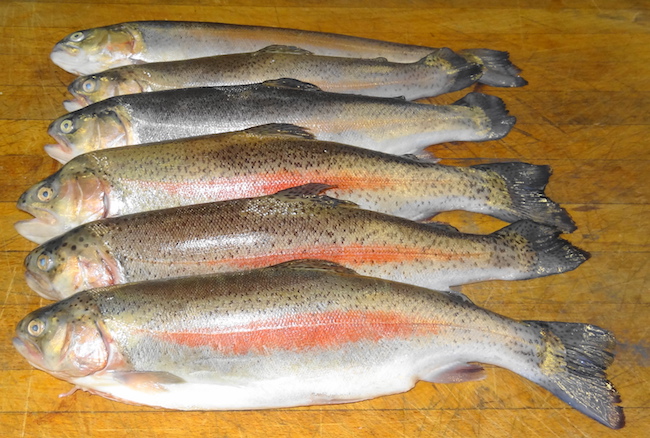 The first Rutland trout of the season

Spring at a Rutland pub: lamb, trout, charcuterie and cider

The soil is slowly warming up and we are beginning to see buds on our fruit trees and bushes. Our cue to start looking towards summer are the small leaves of our wild garlic poking through the leaf litter; not long now before we can start using it in the kitchen as the first of the delicious spring greens.

The last few bits of the game season are also being used now, clearing space for our dwindling stocks of trout, the first of which have already been caught and are in the kitchen as I type. Mixed-game sausages and game terrines are all done and should keep the game lovers happy for the next few weeks. Our plucking machine was very busy this year – I think we wore it out and it’s on the repair list before the next shooting season. However we still have a few pheasant breasts left to stuff and use on the specials door. The upcoming months will see some rabbit, muntjac, fallow and roe deer, a fair deal of pigeons, smoked or otherwise, as our game offering until the full season begins again at the end of the year.

Lamb and hogget
As one season ends the next begins. When out exercising the dogs in the gorgeous Rutland countryside that surrounds us you can’t avoid the sounds of the lambing season and enjoy the antics of the lambs in their fields. Don’t forget that these innocent creatures aren’t used to dogs, so when walking amongst them keep your animals on the lead to avoid scaring them or causing them harm.

We are enjoying some beautiful hogget at the moment – the loins or cannons stripped right back, lean and tasty. We serve them up with some braised shoulder meat coated in panko breadcrumbs for a contrast of taste and texture. The remaining piece of the best end we are stuffing with the minced trim and herbs from the garden, tying then rolling and roasting. This gives us a perfect portion for two to share with rich red wine gravy and seasonal vegetables. The hogget has a little more flavour than the new season spring lamb and is also somewhat easier on the pocket. 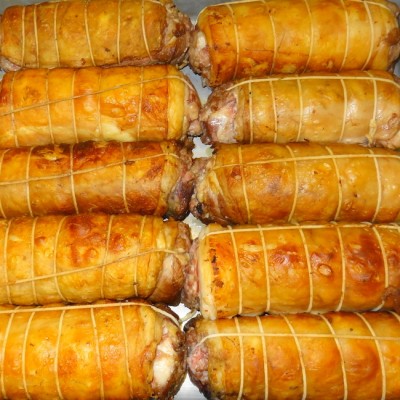 Pub-produced charcuterie
At Jimmy’s Rutland Smokehouse (which I run from the back of the pub), our air-dried Launde mutton is also finally ready after nine months of hanging and is an added treat to our Smokehouse Platter along with wild boar coppa and salami, which are both proving to be a real hit with lovers of charcuterie. We have been invited to enter some of our smokehouse produce into Delicious magazine’s Artisan Food Awards. We have decided to showcase our black pudding and the dry-aged smoked pancetta – two of our most popular products. We look forward to seeing what the judges think.

Rutland cider
This time last year we were trialling Mike Berry’s Fynbury Rutland Cyder and it is fair to say it has gone down a storm both hand-pulled and bottled. An extra-special new bottled variety is his ‘Rutland Reserve’. This Champagne-style cider is a real star and was loved by all who tried it on our wild boar night, so much so that it’s about to become a staple on our wine list.

The Countryside Alliance’s ‘Rural Oscars’ awards will be handed out in April and after nomination we were lucky enough to make it into the finals of the ‘Local Produce’ category. So Kate, Dad and I are off to the Houses of Parliament for a day to see how we’ve done. It’s a great achievement for the whole team here at The King’s Arms in Wing and one we are all very proud of. It’s also a big pat on the back for all the producers at grass-roots level who work so hard to supply us with such fantastic raw ingredients. 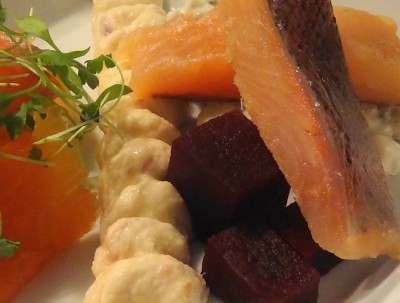 Luxury Travel Guide winners
At the end of last year we spent some weeks totally renovating the bathrooms in the Old Bakehouse opposite the main entrance to bring them into the 21st century. Shortly after the Luxury Travel Guide told us we had been nominated in their global awards 2016. We are proud to say that out of 10,000 nominations we were crowned winners in the ‘Best Guesthouse’ category, which makes all the graft worthwhile, especially for our fastidious and ever hard working housekeeper. The rooms keep us busy and in the mornings after our hearty breakfasts a steady stream of our homemade produce leaves with our guests. Sausages, smoked bacon, black pudding and even the eggs laid by our hens that morning are popular, but the quality of the local trout speaks volumes and sides of cold or hot smoked trout or our paté are equally in demand.

Big news!
Our big news – Kate and I tied the knot at Stamford registry office before rushing of for a break after the New Year festivities to Zermatt in the Swiss Alps. We have returned full of beans and are now expecting our first child just in time for the August Bank Holiday, just to spice things up a little.

For all card-toting members of the Great Food Club we would love to extend our discount offer to 10% off the total food bill of any of our menus or smokehouse produce purchased from Monday evenings through to Friday lunch inclusive (for parties of four or less). We look forward to seeing you all soon!

James is head chef and owner at The King's Arms pub in Wing, Rutland