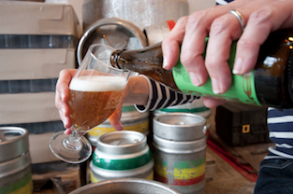 The Brewster: ale lady of Grantham

Sara Barton is a brewster – the Old English word to describe a female brewer. Fittingly, Sara runs Brewster’s Brewing Company, a Grantham brewery she founded in 1998.

A bit of social history: before the industrial revolution most brewers were women, but then men, sniffing huge beery profits after the birth of the steam engine, decided that this brewing lark was their cup of tea after all.

“Going back to medieval times, both bread making and brewing were female roles,” says Sara. “Many widows brewed beer as a way of making ends meet. But after industrialisation, the large breweries took over.” 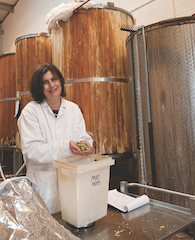 Now the brewster is back. All over the UK, female beer producers are fermenting and mashing again, with Sara helping to blaze the trail. She recently set up Project Venus – an initiative to bring female brewers together and promote drinking beer to women in general. The project has resulted in a collaboration between 14 brewsters from up and down the country who have pooled knowledge to produce several beers, the latest being a brew called Venus Gold. 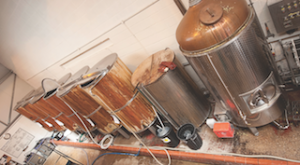 But as interesting as all this is, it’s the taste of the beer that counts. And happily Sara’s brewery is doing rather well in this regard too. It has picked up several gold medals over the years, most recently for its German-style lager called Helles Belles. Hophead is another Brewster’s award winner.

Birth of Brewster’s
So how did Sara come to run her own brewery (and pub – she has jointly owned the Marquis of Granby in Granby near Bingham for five years)?

She explains: “The origins of Brewster’s stretch back around 25 years. I couldn’t get a job after completing a bio-chemistry degree so ended up furiously flicking through university prospectuses thinking, what can I do now? I spotted a brewing post-grad course at Heriot-Watt  University in Edinburgh. It sounded interesting and I took a punt. As a result I eventually ended up working in Reading for what was then Courage. But the problem there was that the brewing process was run by computers, as it is at all large breweries. I’d learnt about the chemistry behind brewing at Heriot-Watt, and getting hands-on with that was what interested me. So I thought what I really need to do is run my own brewery. 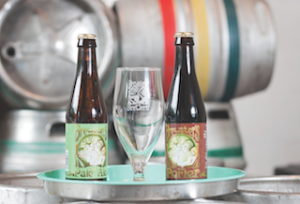 “Eventually, in 1998 I decided to go for it and returned to the Midlands – where I’d grown up – to start brewing beer in a barn behind my parents’ house in Stathern, a small village in the Vale of Belvoir. Our first beer was called Maiden Brew. The second was Marquis [see below].”

From day one Sara received support from the team at Stathern gastro-pub The Red Lion, who were happy to stock such locally brewed beer. Today, Brewster’s ales are regularly on tap at several popular local real ale pubs including The Wheel at Branston, The Ship at Oundle, The Chequered Skipper in Ashton and, of course, Sara’s own pub, The Marquis of Granby. Online stockists include Beers of Europe and Ales by Mail.

Still going strong
In 2006 Brewster’s moved from Stathern to an industrial unit in Grantham. Since relocating, Brewster’s has continued to go from strength to strength and in February 2012 added two gleaming ‘cylindro-conical’ vessels to its 10-barrel (1600-litre) set-up. “You can both brew and condition in them,” says Sara. 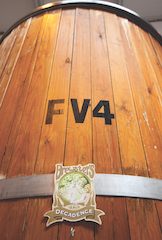 But despite the technical appearance of  the various vats and pipes, it’s worth remembering that all that goes into them are local water, Brewster’s own yeast, barley grown in Lincolnshire and malted in Grantham, and hops from around the world.

It’s tribute to Sara’s knowledge and her passion for brewing that Brewster’s is thriving and producing award-winning beers. If she hadn’t followed her nose into brewing there would be one less brewster, and the Midlands would be a poorer place for it. 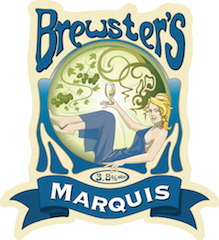 The second beer that Brewster’s produced – Marquis – was brewed specially for a TV programme about John Manners, Marquis of Granby (1721 to 1770). Son of the 3rd Duke of Rutland, the Marquis commanded an army in Germany during the Seven Years’ War. He returned to England a hero and improved his stock further by giving pensions to his soldiers. Many of them set up pubs with the cash, which is why there are so many called The Marquis of Granby. Sara’s Marquis of Granby pub is in Granby village and thought to be the original.