The fascinating
history of Blue Stilton 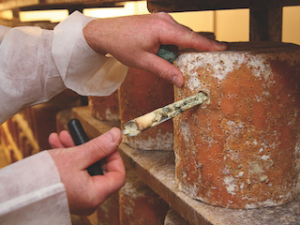 The history of Blue Stilton is something of a contentious issue.

The good folk of Little Dalby, Leicestershire, might say that Stilton cheese was first made there in 1710 by a Mrs Orton. Like any farmer’s wife back then, Mrs Orton made cheese for her family from milk produced by her own cows. One day a batch of cheese turned out crumbly and veined with blue instead of being creamy and white. Mrs Orton had no idea that the change had been wrought by a mould getting into the cheese. She thought that the grass in her field had magical properties. Soon other farmers’ wives were making blue cheese.

Another story has it that Stilton was created by Mrs Frances Pawlett (or Paulet) of Wymondham, also in Leicestershire. Mrs Pawlett had no time for the methods of farm kitchens. Instead she instituted rigorously standardised methods to be used by the women working in her dairy. Through a process of trial and error, hard work and careful record-keeping, Mrs Pawlett discovered a method that turned out delicious and lightly crumbly blue cheese – the modern Stilton.

Whether Stilton was invented by one person or, more likely, evolved through the work of many, it is certain that by 1742 Mrs Pawlett was turning it out in large quantities. 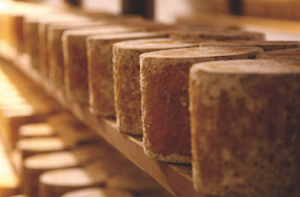 One man impressed by Mrs Pawlett’s cheese was Cooper Thornhill, the landlord of the Bell Inn at Stilton, Cambridgeshire. He was an enterprising innkeeper with a flair for publicity and marketing. His Bell Inn was one of the busiest and most prestigious of the many inns on the Great North Road where the stagecoaches halted to change horses and allow customers to grab a meal.

Thornhill was always on the look out for a new sensation to pull in the customers. Around 1744 he came across Mrs Pawlett and her blue cheese. Thornhill bought large quantities of the blue cheese and began serving it at the Bell. He had first persuaded Mrs Pawlett not to sell the cheese to any other inns on the Great North Road so that his inn alone could boast this wonderful food.

Then Thornhill hit on a new way to increase custom. He announced that he could ride from the Bell to Shoreditch, London, back to the Bell and then once more to Shoreditch all in the daylight hours of a single day. Nobody believed he could cover the 213 miles in the time, so he offered to put his money where his mouth was and began taking bets. Before long he had staked 500 guineas – a huge sum – on success.

At 4.15am the independent judge saw the sun peep over the eastern horizon and sent Thornhill on his way. For hours, Thornhill galloped up and down the Great North Road, changing horses 19 times and cheered on by great crowds along the way. When he finally tore into Shoreditch for the second time in the late afternoon there were some 4,000 people waiting for him. Thornhill won his bet, pocketed the 500 guineas and went home.

The fame of the Bell Inn and the wonderful Stilton cheese that it sold was assured. 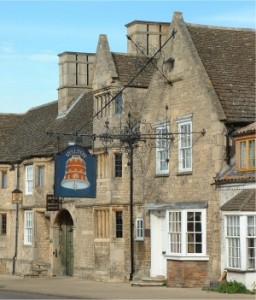 The Bell Inn at Stilton