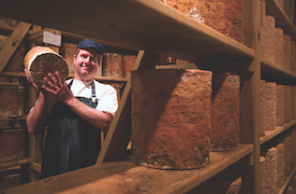 The story behind Stichelton cheese

Stilton – king of English cheeses. Or is it?

But for over 200 years, the milk used to make Stilton was straight out of the udder, as raw as steak tartare. In 1989, Nottinghamshire’s Colston Bassett Dairy became the last Stilton maker to switch to pasteurised due to health concerns about raw milk and listeria. Six years later, Stilton’s Protected Designation of Origin (PDO) certificate was changed after a campaign by the Stilton Cheesemakers’ Association to state that Stilton must be made with pasteurised milk. This was bad news for purists, who believe that Stilton made with pasteurised milk is not only lacking authenticity, but is also less tasty. They say raw-milk blue cheese offers greater complexity of taste because pasteurisation kills bacteria, enzymes and proteins that contribute flavours. 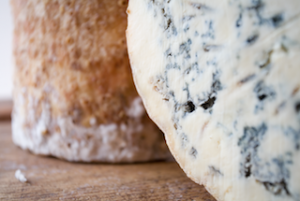 Enter Stichelton
Stichelton was created in 2006 in response to Stilton’s mandatory pasteurisation rule.

“We are not allowed to say our cheese is made to a Stilton recipe,” says head Stichelton maker Joe Schneider. “But if you were to visit Colston Bassett Dairy and watch how they make cheese, and then watch us make cheese, I suspect you’d see little difference. Our recipe is also very similar – but only coincidentally – to the older Stilton recipes in some of the cheesemaking books floating around. Our aim was to make a raw-milk Stilton but we were refused permission by the Stilton Cheesemakers’ Association.”

Like many good ideas, the seeds of Stichelton were sown in a pub. One evening in 2004, Schneider was in The Wheatsheaf at Borough Market, London, having a beer with Randolph Hodgson, chairman of influential farmhouse cheese wholesaler Neal’s Yard Dairy.

Schneider recalls the evening, speaking in his soft American accent: “Randolph asked, ‘You wanna do this raw-milk Stilton project?’ I said, ‘Yeah, great idea,’ and got another beer. But the idea sunk in – he’d planted it. Later on I thought, wow, could I really do that? It’s like the Holy Grail of cheesemaking, to bring back the quintessential English cheese and make it with raw milk on a small working farm.” 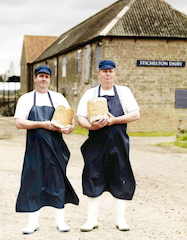 Schneider “grew up on Kraft singles and Parmesan in green cans” in his native America, before moving to Holland in 1995 after he and his wife decided to experience life outside the US. “I got a job making feta for a Turk in Eindhoven. What I loved, and what I still love about cheesemaking, is the fact it’s a mix of hard science and a more nebulous kind of alchemy – something magical you can’t pin down. That mix fits my personality.”

Learning his trade
Schneider started looking at the magical  ripening process, what happens when cheese is left on the shelf in the right conditions. He called various British dairies in a bid to learn more and soon discovered the Specialist Cheesemakers’ Association (SCA). This led to a move to the UK in 1998 and a job on a biodynamic farm in Sussex, making a Cheddar-type cheese, plus creams and yoghurts.

“At that time, Brits were hands down the best makers of artisan farmhouse cheese in the world. Traditional cheesemaking was almost completely lost in the UK in the 1950s, ‘60s and ‘70s when the Milk Marketing Board decimated the industry. But in the late ‘80s when the authorities mooted the idea of banning raw-milk cheesemaking, the SCA was formed to tackle the threat. Lots of people worked really hard and the result was a renaissance in farmhouse cheesemaking.”

Next stop for Schneider was Daylesford Organic Farm in the Cotswolds, working for Sir Anthony and Lady Bamford (also behind multinational construction giant JCB – formerly known as JC Bamford). There he was heavily involved in building Daylesford Creamery in 2001 and made Daylesford Cheddar, Penyston and Single and Double Gloucester, among others. “I was at Daylesford for five years. There’s a great entrepreneurial spirit there and I learnt so much about artisan food making in general.”

But at Daylesford Schneider was an employee and he wanted to do his own thing. So the conversation with Randolph Hodgson in The Wheatsheaf at Borough Market came at the right time. 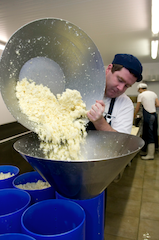 Doing it yourself
In the years preceding Schneider and Hodgson’s pub chat, Hodgson, who has sold farmhouse cheeses with Neal’s Yard for 30 years, had longed for the return of raw-milk Stilton.

“He thought it was the best cheese in the world,” says Schneider. “In his opinion, Stilton made with pasteurised milk is a bit lacklustre in comparison. He asked Colston Bassett to start making it with raw milk again but to no avail.”

Hodgson realised that if raw-milk Stilton were ever to return, he’d have to make it himself, but there was one small problem – he didn’t have the £3 million or so needed to set up a new farmhouse dairy from scratch. He’d found the perfect cheesemaker in Schneider, but now the two of them needed a dairy farm, a dairy, and some capital. 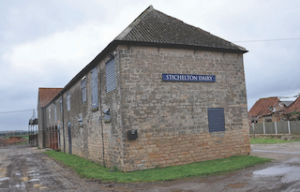 “Fortune intervened and we found Welbeck through the Academy of Ancient Music,” says Schneider, with a grin. “We employed a woman to find a suitable farm who had just finished working as PA to the director of the Academy. She had a friend who built harpsichords and happened to be working at Welbeck. He knew there was a dairy farm there.”

Welbeck is the place
Welbeck had the cows, the organic certification (important for Schneider), a barn ripe for conversion, and some capital. “We also liked the way they were farming and they understood what we were trying to achieve,” says Schneider.

The building at Welbeck where Stichelton is made was converted from barn to dairy over six months to a very high standard. Its ancient stone walls hide state of the art kit. From the window you can see the herd of Friesian-Holsteins that supply the milk. The cows are milked at the other end of the barn and milk is pumped straight into a 2700-litre vat.

“We faced huge challenges in the beginning,” says Schneider. “It was difficult to get the recipe right and harder to control expectations. People expected instant success but it was always going to take time. In the third year we hit our stride after making slow, attritional improvements, as well as enjoying a few lightbulb moments.”

Today, Stichelton is available to buy from Neal’s Yard Dairy in London, Welbeck Farm Shop and Delilah Fine Foods in Nottingham. But is it the real king, better than Stilton? You’ll have to try them both and decide for yourself.

Stilton v Stichelton
“When we started making Stichelton we were very open with Stilton Cheesemakers’ Association and wanted to win hearts and minds, but we also wanted to change the rules,” says Schneider. “We take issue with the part of Stilton’s PDO certificate that was altered to make pasteurisation mandatory. PDOs exist to protect a food’s heritage, nothing else. Because of that we’ve applied to the EU to have that specific aspect of Stilton’s PDO changed.” 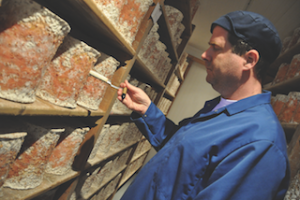 What’s in a name?
“When we were told we couldn’t use the name Stilton, we thought long and hard,” says Schneider. “Then one of Randolph’s customers who belongs to the English Place-Name Society told us the village of Stilton used to be called Stichelton in Saxon English.” It was the perfect solution. 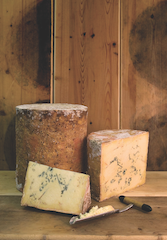