The story of Swithland Spring Water 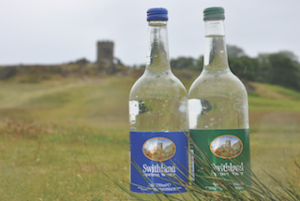 “My cellar used to flood all the time,” says Brian Beeby, the 60-year-old farmer who set up Leicestershire’s Swithland Spring Water at Hall Farm, Swithland in 1998.

“It was a complete pain but indirectly it led to the formation of the business.”

Brian came to Hall Farm in 1975 an arable, pig and sheep farmer with no idea he’d end up selling spring water. It was after 23 years of traditional farming that, in 1998, he decided to dive into the H2O market. 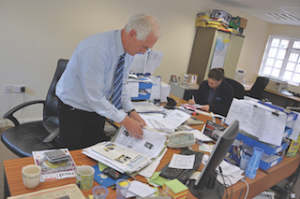 Brian Beeby in the Swithland office

“We’d already diversified by leasing out stables. But we knew there was a spring down there and had seen the success that Buxton were enjoying.” Brian speculated that he might, just might, be able to reach the spring water, extract it, bottle it and sell it.

It was a tough call. The investment needed to drill down to reach the water, pump it up, test it, and jump through the various environmental hoops, was high. And there was no guarantee it wouldn’t be money down the drain. 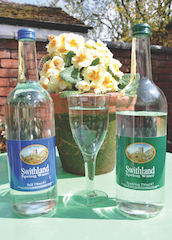 “I took advice from microbiologists and decided to go for broke. It took us 10 days to drill down through the rock and the first sample we took from 20 metres below ground proved promising. We then dug down to 80 metres and took another sample, which turned out to be perfect.”

Today Brian extracts 300,000 litres of spring water every week from the land below his farm, filling 7,500 19-litre water coolers (the remaining water is used to clean the bottles). “I employ a great, hardworking team of 18 and we conduct daily checks on the water in our own laboratory. Weekly samples go to an independent laboratory.” 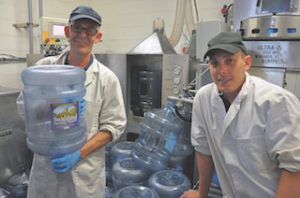 Swithland Spring Water exists due to a natural geological feature called an artesian aquifer – a layer of porous rock that stores water (the light brown section in the diagram below). By drilling down and tapping into this, Brian can reach spring water. And lots of it. “There’s a huge amount down there,” he says.

The water gets there by seeking out cracks and fissures, being purified as it percolates through the strata. Eventually it reaches a bed of slate (used to build many Charnwood houses), and here it is stopped in its tracks, for the rock is impossible to penetrate. At this point Swithland’s bore hole and pump get in on the act, tapping into a well in the saturated strata to pump up spring water. 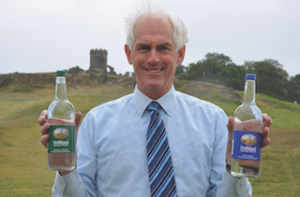 After rainfall hits the ground, it takes up to 50 years to reach the well that Brian taps, all the time being filtered.

Back above ground, the naturally purified water, which may well have fallen on Leicestershire soil during a heavy rain shower in around 1961, goes straight into bottles and large containers (for offices – Swithland’s main market) before being taken to a variety of locations, including Harrods in London, Hotel Maiyango in Leicester, and to high quality delis such as North’s in Rothley. Brian’s decision to drill paid off, enabling us all to enjoy some of the purest spring water possible.