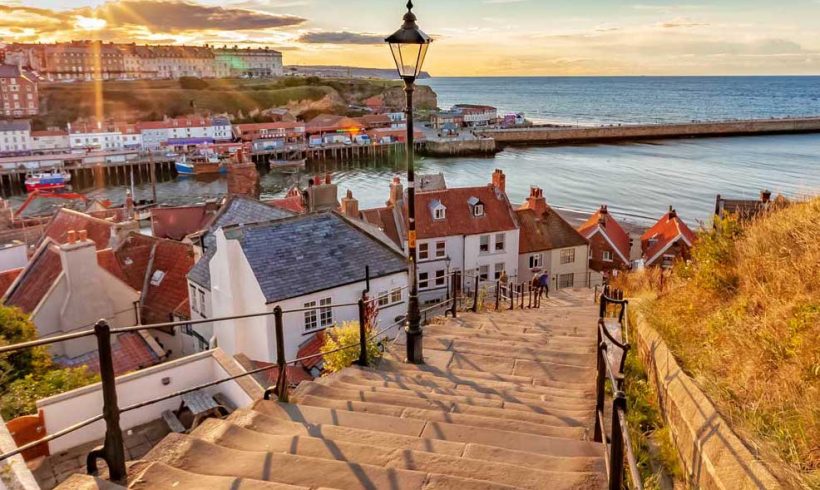 Where to eat and drink in Whitby, Yorkshire | A Great Food Club Guide

Whitby is a place for all seasons, with dramatic, changing landscapes. It’s located on the iconic Yorkshire Heritage coastline surrounded by vast beaches and great swathes of the vibrant North York Moors National Park.

The curved arms of the twin piers draw the gaze out to sea, their shape mirrored by the whale’s jawbone arch that crowns the cliff to the west.

Whitby is divided in two by the River Esk estuary.

The historic East Side is where you can meander through the maze of narrow, cobbled lanes and winding alleyways with red-roofed, higgledy-piggledy cottages. There are gourmet food stores and old-fashioned signs for independent shops selling Whitby Jet jewellery and crafts.

Or, you can climb the famous 199 steps to the gothic ruins of Whitby Abbey – the inspiration behind Bram Stoker’s Dracula.

The thriving harbour is where fishing boats pepper the quayside and land their catch for the open-air market, restaurants and award-winning fish and chip cafés.

We needed a whole weekend to explore the gems in this characterful seaside town. Whitby is rapidly becoming quite a dining destination, and here are just a few of our recommendations.

Where to eat and drink in Whitby

Monks Haven is the best place on Church Street to have breakfast before or after climbing the steps to the Abbey. You are served by warm and friendly staff in a bright and welcoming atmosphere. We loved the pot of Yorkshire tea served with toast, kippers and scrambled eggs for brunch.

The Green Dragon Ale House is a family-owned shop on historic Grape Lane, near the old swing bridge. It offers 300 different craft beers and ciders from around the world, and the tiny taproom offers five keg lines with new beers on daily. There is also a large range of gluten-free and low-alcohol beers. A real hidden gem.

Keep your eyes peeled for this microbrewery and taproom. It sits beneath the towering arches of Whitby Abbey. Whitby Brewery is housed in a converted barn, where a small bar serves five cask beers and a selection of bottles all produced on-site. Knowledgeable and friendly staff pull the pints, making it the perfect spot to refuel after trekking up the 199 steps. Sit on one of the beer barrel stools and sink a pint of Whitby Whaler right next to the tanks in which it was made.

If you don’t think you’re a fan of kippers, you will be by the time you’ve left Fortune’s. This tiny, ramshackle shop is largely unchanged since it was established in 1872 and you’ll see old photos on the wall of the six generations of family who have worked here.

You’ll smell its smokehouse long before you reach it, and its charred black walls filled with lines of hanging fish are a sight to behold. Fortunes also smokes bacon, if you really can’t be swayed to kippers.

This large fish and chip restaurant is opposite the station and harbour, and sometimes you have to queue to get a table in this Italian-style venue complete with booths and colourful Tiffany lamps. This is to be expected, as Trenchers netted the prestigious title of UK’s Best Fish and Chip Restaurant in 2019. Blackboards on the walls tell you which boat landed the freshly-caught cod, and also that your chips are prepared on the premises using potatoes from Ripon. It’s the perfect place for a family Yorkshire teatime treat.

The Star Inn The Harbour

Michelin-Starred chef Andrew Pern’s latest venture showcases the best locally sourced produce from land and sea. His restaurant, The Star Inn The Harbour, in the former tourist information building on the harbour, has a nautical look – ropes, creels, framed postcards – but it’s tastefully done, not the full Captain Haddock.

Features include catch-of-the-day fish and meat specials, as well as world-famous North Yorkshire Moors produce. Desserts come predominantly from the restaurant’s Ice Cream Parlour, including some childhood classics but brought up to date.

Both a pub and a restaurant, The White Horse & Griffin is on the East Side of town, the side with those cobbled streets and the 199 steps up to the Abbey. The building has been here since 1681 and was the first coaching inn between Whitby, York and London. It remained an inn until 1939.

It’s said that some chap called James Cook stayed there a few times. Apparently, he was pretty big in his day and captained many voyages.

The front entrance from Church Street leads you into a high-ceilinged room, made so by removing one of the floors. Along one side are a number of original fireplaces leading to a gin bar at the back. Go further back and down a small flight of stairs and you’ll find the restaurant. It’s low level but not in the basement; there is an old stove with the wine balanced above on the mantel.

Whether you visit Whitby in the summer for a sunny stroll along the beautiful Blue Flag beach, or in winter to shelter in a quirky pub with some steaming fish and chips, there’s plenty to sink your teeth into this Yorkshire town.