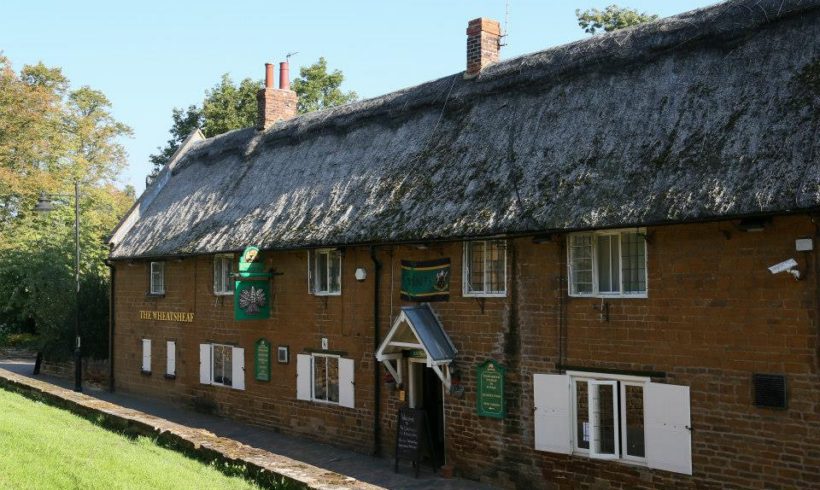 A new era for The Wheatsheaf in Dallington

Alfie, a black-and-tan two-year-old Jack Russell, luxuriates in his basket next to a crackling woodburning stove. His owners, Victoria and Sam Tendall, look fondly on from behind the beer pumps while Alfie enjoys his new home – The Wheatsheaf in Dallington, Northampton (part of the Great Food Club network) – a beautiful old pub built in distinctive Northamptonshire stone, situated opposite the village’s ancient church.

Sam and Victoria moved into The Wheatsheaf with Alfie in May 2014 and have been hard at work since, shaping the pub into their own image with the assitance of the property’s owner, Everards Brewery. Since becoming the new licensees they’ve achieved a great deal quickly, pushing The Wheatsheaf firmly into the centre of village life and filling more chairs in its large dining room than ever before. 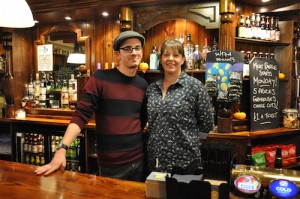 Before Dallington, the couple worked in London’s hospitality industry – Sam as a waiter at Gordon Ramsay’s Claridge’s and then as manager for up-and-coming pub operator Food & Fuel, and Victoria for a London brewery. But they didn’t come to Northampton randomly – both have roots in the town and met while working at its 12th century Church restaurant.

“While living in London I had a growing urge to run my own business,” says Sam. “I also started wanting to be nearer my friends and family, so we began thinking about relocating to Northamptonshire, where running a business would be far more affordable and achievable than in London.” 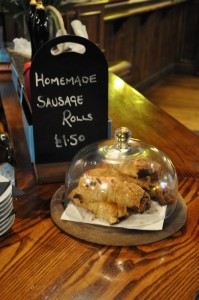 They browsed the web and came across Everards and The Wheatsheaf but, explains Victoria, “we didn’t think the pub was a possibility until the recruitment process was actually happening. Then all of a sudden we were going for an interview with Everards and it was full steam ahead. We got a really positive feeling and followed it. Everards have been really good – the support we’ve had has been wonderful.”

The really hard work started after they signed up for a three-year tenancy, and during the first week Sam and Victoria rose at 7am and turned in at 3am for seven days straight as they cleaned and rearranged the pub. 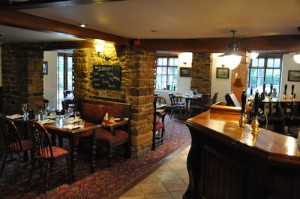 One of their biggest aims was to put the pub back at the heart of Dallington’s local community, an ambition that Everards supports wholeheartedly. In the summer they held a beer festival and fete on the large garden and raised £450 for charity. “We got the whole village involved by having local produce and craft stalls, a tea and a cake stand, plus we also had the local fire service and police down to let the kids have ago on the vans,” says Victoria. “Villagers were saying: ‘We’ve never had this before’, which was lovely to hear.”

The licensees’ focus, energy and family-friendly approach has led to various village groups starting to visit the pub again and more families coming in too, attracted by events like Halloween pumpkin-carving competitions, fireworks displays and children’s stories at Christmas. 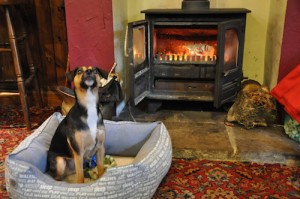 The other big aim Sam and Victoria had was to turn the pub into a dining destination, and they are well on the way to achieving that, too. “Food sales were almost nothing when we arrived,” says Sam, “which is crazy for a pub with a large dining room. Our strategy has been simple: reasonably priced, traditional pub food cooked well and made using seasonal, local, high quality ingredients. We’ve got an allotment out the back that we use and we source from as many local suppliers as possible, including the village butcher. Over the past six months, food sales growth has been phenomenal.” A big reason for this is head chef Luke McEnroe, who they met while working at The Church restaurant.

Sam and Victoria have also improved the drinks offer, making efforts to stock local beers and ciders from the likes of Phipps Brewery, Frog Island and Bottle Kicking Cider Co alongside the Everards cask ales and a new range of bottled beers from American craft brewers. Their house wines are British – made by Distant Vines – and they serve spirits from craft distillers such as Sipsmith and Northamptonshire’s very own Warner Edwards. “The brewery are helping us to refurb the cellar so we can bring in more beer and cider lines,” says Sam.

Behind all this activity is the hefty use of social media with the aim of communicating the positive things that are happening and ultimately driving more custom. “We use Facebook, Twitter and Instagram every day, many times a day,” says Victoria. “Twitter has been great for getting in touch with local breweries and food producers – we share their updates and they share ours. We’re also running traditional pub events on social media – things like meat raffles and competitions where you can win six pints at 6pm. It’s working well.”

Don’t expect Sam and Victoria to sit back now they’re settled in. “We’re going to refurb the loos soon, then focus on our two outbuildings,” says Sam. “We want to convert one into a kitchen extension, with two double bedrooms upstairs. The other barn we’d love to convert into a village shop eventually – there’s isn’t a proper shop in the village so it would work nicely.”

Amid the hard work and talk of future plans, there’s one character at The Wheatsheaf whose only concerns are the level of heat coming from the woodburning stove and when dinner is coming. Alfie the Jack Russell has found nirvana.