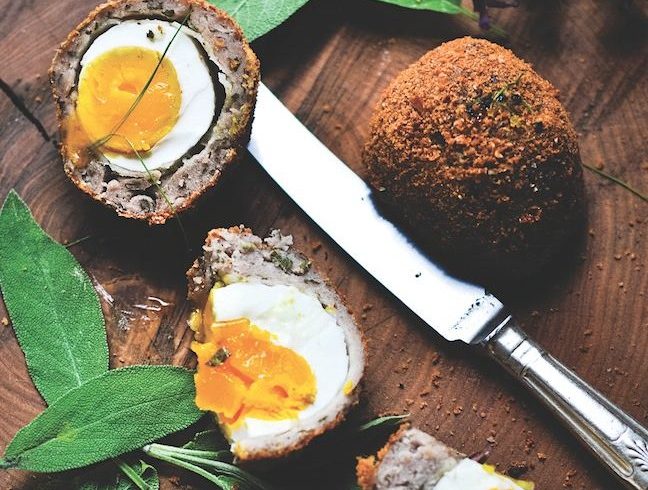 Recipe and photography by Hazel Paterson

“Homemade Scotch eggs are far better than those from the supermarket and you can add herbs and spices to customise them! You could just buy good Lincolnshire sausages and remove the skins to make these but I like to add a big hit of extra sage. The only tricky bit is covering the eggs with the sausagemeat: I use the cling film method but whatever works for you is the right way!”

1 Finely chop your sage if using fresh and combine with your sausagemeat.

2 Season and leave for 30 minutes in the fridge to allow the flavours to develop. Boil your eggs. I like quite a soft yolk so boil each egg for four minutes before plunging it into iced water, but if you prefer a harder yolk then cook for longer.

4 Cut a square of cling film and lightly dust it with flour. Take a handful of sausage meat and place it in the centre, lightly sprinkle it with flour, then cover with another sheet of cling film and, using a rolling pin, roll it out to a size that will easily surround the egg. Remove the top layer of clingfilm.

5 Roll your boiled egg in the seasoned flour then place in the centre of the rolled out sausage meat. Draw up the four corners of cling film so the sausagemeat envelops the egg, then smooth the meat around to fully cover the egg. I tend to twist the clingfilm so it squashes around the egg, which gives a lovely smooth surface.

6 Roll your sausage-egg in the flour, then the beaten egg and finally the breadcrumbs and deep fry in 170ºC oil for 6-7 minutes before draining on kitchen roll. I usually then put the Scotch egg in a warm oven while the others are being made.