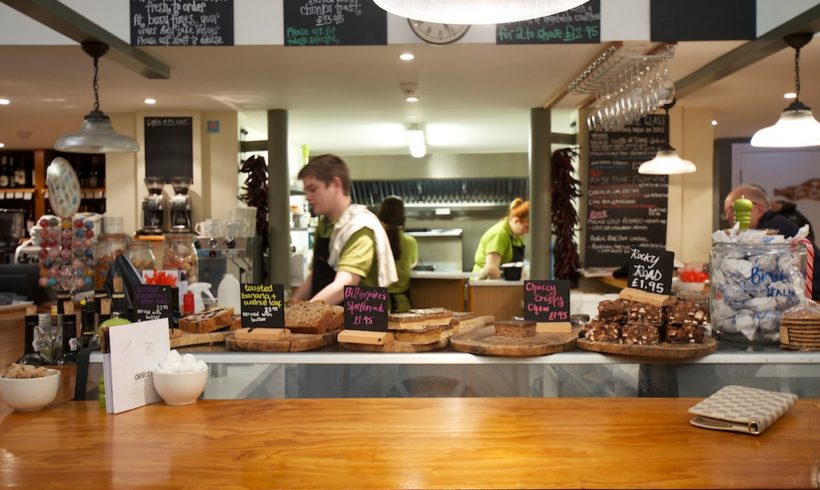 Delilah Fine Foods bids for Leicester venue
The Richard III effect seems to be picking up in the centre of Leicester. In recent months the area around St Martin’s, close to the king’s tomb and associated visitor centre, has seen the opening of a BrewDog bar, Grillstock barbecue restaurant and the refurbishment of St Martin’s Tea and Coffee. Now there are at least three planning applications for food and drink businesses in the area, including two major and long-vacant buildings.

Possibly most exciting is a bid by highly-rated Nottingham deli Delilah Fine Foods (former UK Deli of the Year and part of Great Food Club’s recommended network) to open a branch in the former Allied Irish Bank premises at 4 St Martin’s. The conversion will be along similar lines to Delilah’s recent Nottingham project and would include a restaurant to open until 7pm. The nearby former Nat West Bank at 2 St Martin’s is slated to become the fifth steakhouse run by Norfolk company Middleton’s. Plans to convert the Grade II listed building have been given conditional approval.

Eloic Montagnier, general manager of The Belmont, said Jeremy will concentrate on sourcing from local suppliers and producers to help create his style of modern British cuisine.

Jones has recently been working as a freelance head chef but has wide experience in hotels in the UK and Australia. On his CV are spells at the five-star Hyatt Hotel in Canberra and at Australia’s Parliament, and more recently three years as head chef at the two rosette Ty Mawr Mansion in Cerdigion, where he ensured 80-90% of produce came from within a 20 mile radius. Jones said he is “especially looking forward to working with the great local suppliers and independent producers we have on our doorstep”.

Partnership plans Melton Mowbray School of Rural Food
Food businesses in Melton Mowbray have been considering plans to consolidate its place as Britain’s “Rural Capital of Food”. On the table are proposals for a School of Rural Food that would teach skills such as butchery, brewing and cheesemaking to a new generation, and for new production units aimed at new small food businesses.

The plans come in a strategy document from the Melton Food Partnership, which has helped create high-profile events such as the East Midlands Food Festival, Artisan Cheese Fair and British Pie Awards. Also proposed are a centre where visitors could see local specialities being prepared, a social enterprise restaurant focusing on the area’s pie heritage, and new events such as a Melton Pie Fest.

The Partnership has been consulting on the strategy during June and July. “Melton has made significant progress in developing its economy based on its unique food heritage,” said Partnership chair Matthew O’ Callaghan. “This vision takes this work forward and if realised would establish the area as one of the leading food centres in the country as well as a major tourist destination based on food.”

Harborough Food Fest
Market Harborough is to hold its first food festival over the Bank Holiday weekend in August, aiming to showcase the best of the region’s producers. The two-day event will be held in Welland Park on Sunday August 30 and Monday August 31, from 11am to 7pm.

More than 100 stalls are booked in, featuring artisan breads and cakes, cider and beer brewed in the region, plus meat, pies, chutney and cheese, sweets, pancakes, waffles and fudge. There will also be street food traders offering European, Asian, Indian, African and Caribbean cuisine.

Alongside the food stalls, there will be a licensed drinks area, live music, craft stalls, cooking demonstrations and street entertainers.

There may still be space for food or craft traders to take part, and anyone interested should contact event organiser Sairah Butt on 01858 465 206/0777 305 8933 or email sairah@marketplaceeurope.co.uk

Micro pub for Stoneygate?
Leicester could soon see its first micro pub, with an application being being made by two local former teachers to open “The Real Ale Classroom” in Francis St, Stoneygate.

A planning application currently before Leicester City Council positions the bid clearly within the micro pub category – “a small, warm and friendly environment for people to meet and chat over a drink”, with no amplified music, television, fruit machines, keg lager, alcopops or cocktails. Instead it promises “mainly real ales and farmhouse ciders straight from the cask made by independent local and regional producers”.

The pub, which would be in the premises of a former clothes shop, will be designed to appeal to “discerning drinkers out for a quiet pint or two”. For more details see www.facebook.com/therealaleclassroom