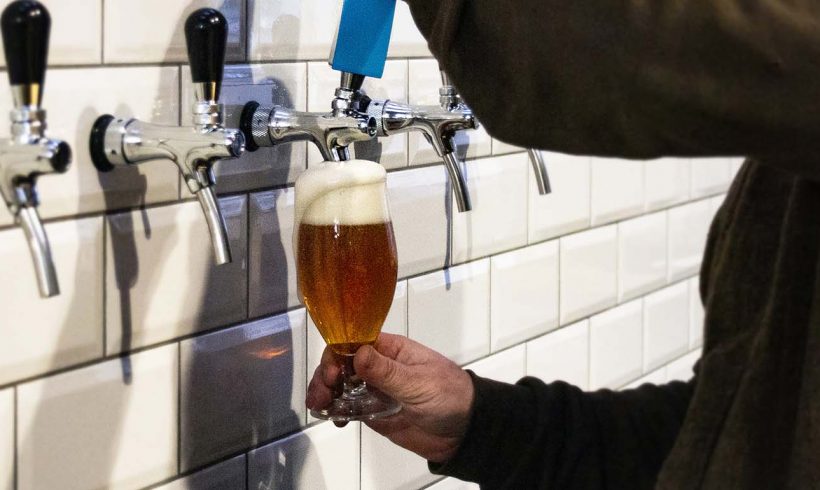 The winner is Round Corner Brewing of Melton Mowbray for its outstanding, well-balanced beers, relentless energy and policy of teaming up with other food and drink independents.

Round Corner was founded by two Irishman who met in New Zealand. Head brewer Colin Paige, who has produced award-winning beer around the world, met business partner Combie Cryan in Wellington. Fate shoved them towards Melton Mowbray.

A friend had just bought Melton Cattle Market, the largest town-centre cattle market in the UK, which attracts 350,000 thirsty visitors every year. It proved an irresistible destination for the new brewery. With money raised from friends and family, they spent £650,000 kitting out the brewery and creating a simple taproom with clear views of the mash tuns and fermenters. You walk in just yards from the chatter of the auctioneer and are immediately assailed with the heady smell of malt and hops.

The core range is characterised by distinctive, crisp beers done well – with no self-consciously wacky stuff. They include Frisby, a bright, clean lager that picked up a Silver at the International Brewing Awards, and Gun Metal, a black lager with a creamy head and counter-intuitively crisp taste which won a Gold. Hopping Spree, a 6.8% hop bomb is up there with the best in its class – bursting with flavour from Centennial, Cascade, Amarillo, Simcoe, Mosaic and Citra hops.

The beers are outstanding, but what makes Round Corner stand out more is the energetic way it teams up with other independent local food businesses to put on great events. Each Friday a different street-food producer comes to the brewery to cook up, while Colin, Combie and the team serve their exceptional beers.

In a hamlet just outside Melton Mowbray, Bruce Midgely has built Brentingby Gin into one of the UK’s most dynamic craft gin companies in just two years. Bruce made 300 trial runs before using his engineering skills to create a unique ten-plate copper still, fondly known as ‘Ayanda’.

Brentingby’s gins are superb: exceptionally clear, clean and well-balanced. The London Dry is juniper-led, balanced by floral and spice notes. Black Edition ramps up the pepper and pine characteristics. And Brentingby’s pink gin features subtle but exotic floral notes from hibiscus, rooibos and baobab. All receive consistently excellent reviews, and some 6,000 bottles leave the distillery each month. Growth plans are ambitious.

Each year, Witham’s picks around 20,000 elderflower heads, avoiding roadsides and margins of intensively cultivated fields to make some 4,500 bottles. Using méthode champenoise they produce a crisp, dry wine with a fine mousse, citrus from Trebbiano grapes, richness from Chardonnay and a glorious floral aroma from the elderflower. Witham’s is on a mission to show people that elderflower fizz can be a dry, sophisticated drink that sits neatly between prosecco and the new wave of fine English sparkling wines.

English wine might be a success story, but Leicestershire remains a challenging place to grow grapes and make fine wine. All credit then to Rothley Wines, founded by Liz Robson, who from just a couple of acres on the edge of the village of Rothley produces a range of award-winning red, white and sparkling wines.

The range includes the very Leicestershire pairing of King Richard III – a bright, spicy white – and King Henry – a light, Beaujolais-style red made with Rondo and Regent grapes. Probably most successful is High Hopes – a sparkling white made from 100% Orion. It has a pleasing soft dryness and balance of flavours from peach to melon and hint of ginger. It should be a staple at Leicestershire weddings and celebrations.