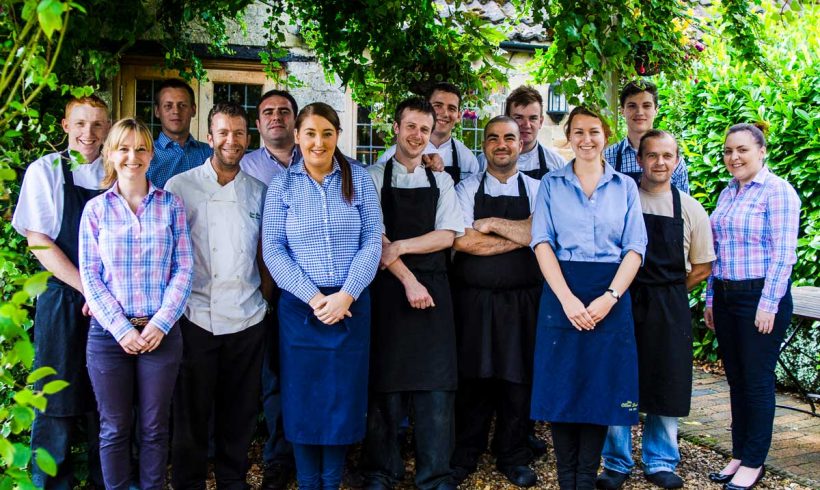 From £140k wreck to ‘Britain’s Best Pub’ – the story of The Olive Branch, Rutland

What’s your favourite pub? For many in the East Midlands – and further afield – the answer has remained the same for several years: The Olive Branch in Clipsham, Rutland. The Good Pub Guide agrees. Fifteen years after its owners bought and revived the country pub, the book named The Olive Branch UK Pub of the Year (2014), proving it is still up there with Britain’s best and continuing to push itself to greater things.

Back in October 1999, however, the experience-ometer was back at zero. The Olive Branch – Clipsham’s only pub – had been closed for two years and the three friends about to buy it had no idea they were jumping onto a rollercoaster that would see their business become one of the first pubs in Britain to win a Michelin Star, an accolade it would hold for 11 years. 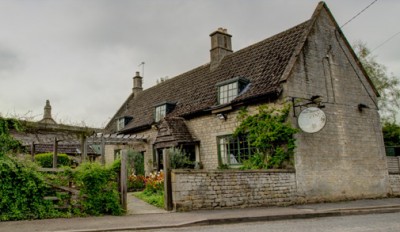 The Olive Branch of Clipsham, Rutland

Two of the trio – Ben Jones and Sean Hope – were at the time working for one of the region’s most successful restaurateurs, Tim Hart. Ben had just overseen the opening of Hart’s in Nottingham after a stint at his boss’s Hambleton Hall, and Sean was second chef at Hambleton. The third protagonist – Marcus Welford – had roots in Rutland but was selling wine in Bath.

“We all wanted to go into business for ourselves at about the same time,” recalls Ben. “I’d just opened Hart’s as general manager and had really enjoyed the experience. It gave me the confidence that I could launch my own place, so in 1999 I handed in my notice after several enjoyable years working for Mr Hart.”

Sean Hope watched his colleague depart with interest, sensing change in the air. And sure enough, soon after Ben left, a new door opened.

“While looking for a property I came across The Olive Branch in Clipsham,” says Ben. “It seemed very small, had been shut for a while and felt a bit off the beaten path, but Sean had grown up in Clipsham and his first job was as a pot washer at The Olive Branch. I went to see Sean to get his thoughts: had it been a good pub and would he be interested in a partnership? He said it had been very popular in its day and he was on board.” Marcus threw his hat into the ring too and the three friends put in a bid. To their terror and astonishment, the offer was accepted. 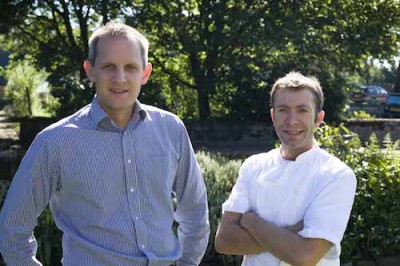 “That’s when we had to find the money!” says Ben. “We spoke to friends and family and booked a meeting with the bank, which agreed to lend us half. Then we applied for an alcohol licence because the old one had lapsed. But we still didn’t have enough cash.”

Nevertheless the trio registered their new business with Companies House – The Rutland Inn Company – and a sign went up outside The Olive Branch in October 1999 advertising their alcohol licence application. Then Ben got a phone call.

“Clipsham resident Colin Ashpole had found our phone number,” says Ben. “He called up and I explained the situation. He invited us to a meeting where he told us that if we needed more money then a few villagers were interested. That allowed us to raise the remaining capital.”

The new team spent four weeks refurbishing the building and received lots of help from locals excited to be getting their pub back. A bonfire party was planned in the paddock opposite and all the detritus from the gutted pub went up in smoke. Villagers, friends and family then helped with painting, floor-stripping and finishing. 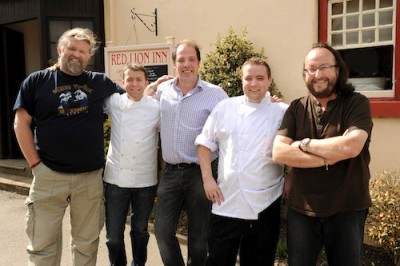 Talking to locals, the history of The Olive Branch came to light. The tale goes that the pub was created from three farm labourers’ cottages and a cow shed in the second half of the 19th century. Before that there was a village ale house near Clipsham Hall, but it was closed down by the lord of the manor, possibly because he got sick of his beered-up workers turning up late, or noise, or both. The closure caused uproar, so the lord decided to convert three labourers’ cottages – located a suitable distance from his home – into a pub. It was named The Olive Branch because it was a peace offering to the village. As Ben says, “the name wasn’t a foodie reference – few pubs served olives in the 19th century!”

After the refurb, Marcus took up position behind the bar, Sean put on his chef’s whites and Ben handled front of house. Their business plan was designed so that if necessary the trio could survive with no extra staff. But they needn’t have worried – the pub’s millennium village Christmas party was a big success and The Olive Branch has thrived ever since.

“We had an incredibly good first year,” remembers Ben. “So we employed more staff and grew from there.” What was their secret? 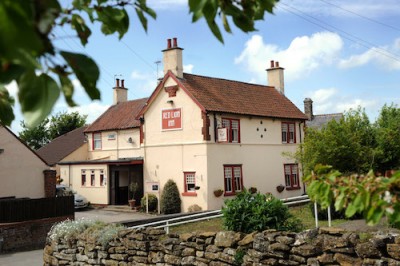 Ben says: “There were hardly any places at the time where you could enjoy really good food in a relaxed setting. Generally speaking, you either had to dress up for a formal restaurant, or go to the other extreme and have chicken in a basket in the boozer. Few pubs offered relaxed, high quality dining and those that tried didn’t – for us at least – quite hit the spot, so we thought there was a gap in the market.

“The whole concept from the beginning was to have one menu throughout the pub that listed everything from sandwiches to seabass, and for people to be able to come in and sit wherever they wanted and eat whatever they wanted.”

The first of many awards that The Olive Branch was to win over its life to date came in 2002 – a Michelin Star. “It was out of the blue – we had no idea,” says Ben. “Someone phoned Sean and asked if he’d seen the new Michelin book. We had no inclination its inspectors had visited us.” 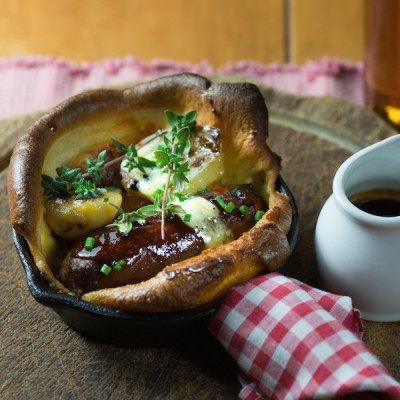 Dishes like this mini toad-in-the-hole are on The Olive Branch’s menu today, photograph by Robin Stewart

There were celebrations of course, but a Michelin Star is a double-edged sword, as Ben explains: “In some ways we’d left our previous roles to get away from the pressure of producing what people expected. Diners have certain expectations of Michelin Star venues, so it can be constrictive. The phone started ringing much more – which, naturally, was very welcome – but it went from the one extreme of people being really pleased for us, to the other of visitors being shocked that a laidback pub like ours could ever be Michelin Star material.”

However, most diners were pleased for The Olive Branch, which retained its Michelin Star until 2013, and it was clear that the three new publicans had created something special.

Sean’s cooking, Ben’s professional but relaxed hospitality, and Marcus’s wine knowledge – all assisted by a high quality, growing team – proved a winning formula. The business flourished and expanded when the trio purchased the Red Lion Inn at Stathern – Good Pub Guide Leicestershire Dining Pub of the Year 2015 and a past AA Pub of the Year – in 2002 (in February 2016 Sean and Ben sold the Red Lion at Stathern and the new owner unfortunately decided to close it January 2017).

In 2004 they bought Beech House, a private dwelling opposite The Olive Branch, and converted it into accommodation with six luxurious bedrooms. In 2012 Beech House won a prestigious Good Hotel Guide César Award. Over the years The Olive Branch and Red Lion Inn have fed Rowan Atkinson, Pierre Koffmann, Heston Blumenthal, Tom Kerridge, the entire England cricket team and many other famous names, not to mention a host of regulars who love these unique pubs. 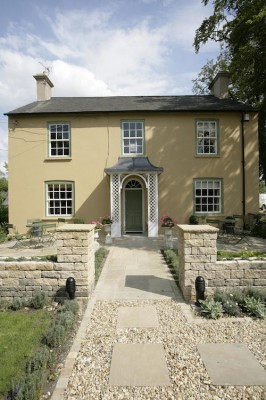 As Ben says: “There’s something special about The Olive Branch’s location and character. Each step of the route towards the pub seems to relax you. After the A1 you reach a lovely tree-lined avenue, then you park up and walk through a tranquil, pretty, traditionally English front garden. By the time you reach the bar you’re completely serene.”

But a nice building and setting isn’t the whole story by a long stretch. It’s people, their attitude and work ethic that make a great pub, and Ben, Sean and Marcus (who left the business in 2012) – plus their loyal team – succeeded in creating two of Britain’s best. “A belief in what we’re doing has been crucial,” says Ben. “We set out to do something we love doing and we’ve just carried on. We’re passionate about pubs, good food, good beer, good wine and hospitality. We just do what we enjoy.” 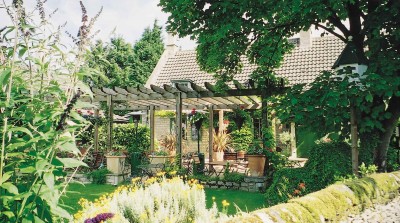