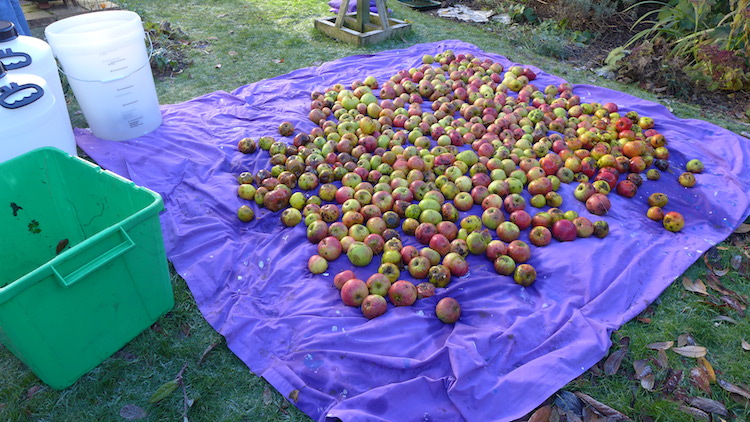 How to make your own artisan cider

In October I attended an ‘Introduction to Artisan Cider Making’ course at the School of Artisan Food in Welbeck, Nottinghamshire (10% off with my Great Food Club card!). More on that course here. It was a brilliant experience and inspired me to have a go at fermenting apple juice.

On December 2, I extracted 25 litres of juice from around 60kg of locally sourced apples. This liquid is now sitting in a container waiting for the yeast to work its magic. Unlike beer, fermenting cider takes time – at least six months – so my batch should be ready by about June 1, 2013.

There are three stages to making cider. First you crush the apples. Next you press the crushed apple flesh to extract the juice. Then you store the juice and wait for it to ferment. That’s it. The process is simple but harder work than it sounds.

Get the fruit…
First you need to source some apples. As a general rule, 2kg of apples produces 1 litre of juice. However, I actually needed 60kg of apples to produce 25 litres. How many apples you require depends on the size of your fermentation vessel as it’s important to fill it almost to the top with juice. The School of Artisan Food’s cider tutor is Simon Reed, founder of Kent’s Rough Old Wife cider. Simon recommends filling to within 2.5cm of the lid. So if you have a 10 litre container I’d say you’d need at least 25kg of apples.

Any variety of apple can be used to make cider, they don’t have to be special cider apples. However, not all apples will produce great cider – that’s trial and error. And luck. As Simon Reed says: “Unfortunately, relying upon the initial taste of the apple as a fruit is a poor way of determining what your cider will taste like… usually a sweet-tasting apple, if fermented out fully will actually produce a dry cider, and many of the totally unpalatable cider apples can produce sweet ciders.”

I managed to track down apples growing in allotments in Stamford, Lincs. I could have bought Bramleys wholesale (this variety is known to produce decent cider), but I was keen to use what was available locally and simply give them a go – it felt more in the spirit of traditional cider making! The ones I found turned out to be a mixture of Newton Wonder and Schoolmaster varieties. 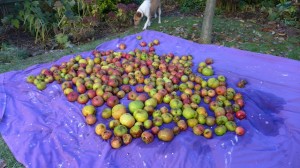 During the course, Simon is keen to point out that all apples can be used to make cider. But if you can, avoid apples that have been sprayed with pesticides because ideally your fruit needs to contain wild yeast. It’s this wild yeast that causes the natural fermentation to take place.

And don’t worry if your apples are bruised, battered, or even slightly mouldy-looking. The fermentation process will kill any nasties.

Get the kit…
Apples sourced, here’s what you’ll need:

1) A crusher for breaking up your apples. You could use a crusher with teeth for this but these are quite pricey. The cheapest method is to use a large bucket with a lid (I used one of these) and a mains-powered drill with a cement mixer attachment (available from most DIY stores – see pictures below).

2) A fruit press – as Simon says, don’t bother with anything less than a 20 litre capacity.

3) Five straining bags for containing the crushed apple flesh in the press.

4) A washing-up bowl or similar for collecting pressed juice as it flows from the press.

5) A funnel and some muslin for pouring and straining the pressed juice (the straining is optional).

6) A fermentation vessel for storing your apple juice.

7) A hydrometer and plastic trial jar.

The method…
Leave your apples for a few days after gathering. They need to soften up to produce the optimum amount of juice.

1) Rinse the apples and all of your kit down with cold water – that means your press, bucket and fermentation vessel. But there’s no need for sterilisation – in fact that would defeat the object because you are looking for natural fermentation, which is caused by that magical yeast which occurs naturally on apple skins. Your apples should be clean but not excessively scrubbed, which may remove the yeast from the skins. Any obvious insects or bugs should be removed, and if any animals have been grazing under your apple trees then obviously make sure any faeces is washed off.

2) Crush your apples. Do this by making a hole in the lid of your bucket. Put three layers of apples in the bucket. Insert the cement mixer attachment through lid and attach to your mains-powered drill. Whizz furiously. You will need to press down and waggle the attachment into the sides of the bucket. This is hard work and you need to make sure all the pieces of crushed apple are the same size. All bits of apple are used to make cider – pips, stalks, core and all. However, large bits of apple will reduce the amount of juice you extract. 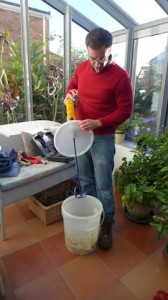 Using a cement mixer attachment, a drill and a bucket is the cheapest way to crush apples

3) Press your apple pulp. For this you will need your five straining bags and your press. Put a layer of apple pulp around one-and-a-half inches deep into a bag. Place the bag into the apple press, making sure the apple flesh is entirely covered by the bag. Repeat another four times, layering the bags on top of each other. Now apply pressure in the fruit press, ensuring you have a container underneath to catch the juice.

Once you have pressed your first bowl of juice, put a small sample of the juice in your plastic trial jar and measure its specific gravity. Make a note of the reading. It will almost certainly be between 1045 and 1065. Mine was 1051. Simon Reed says: “If the value is below 1045 it indicates that the apples have low sugar content and will probably not produce much alcohol or a particularly balanced cider. It is advisable to make up a sugar solution (one part sugar to one part water, heat until dissolved, then cool) and add it to the juice. As a rule, 70g of sugar will raise a gallon of juice’s specific gravity reading by 5 (so 1040 will become 1045).” 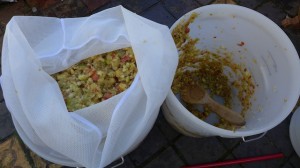 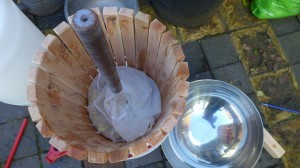 …Then layer five straining bags, each filled with an inch-and-a-half layer of crushed apple, on top of each other in the press… 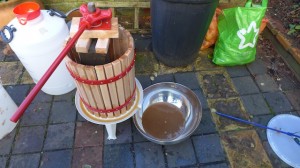 … Press your crushed apple, making sure you have a container underneath to catch the juice 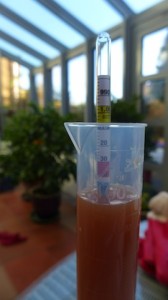 Now take a sample of your juice and measure the specific gravity with a hydrometer. Note down the figure 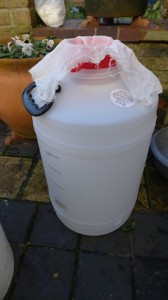 Start to fill your fermentation vessel with the pressed juice, straining it if you wish

4) Transfer pressed juice into fermentation vessel, straining through muslin if desired (however, it is not essential that the juice is clear – this is purely a matter of personal taste). Repeat steps 2) and 3) until your fermentation vessel is full (2.5cm from the top).

“Place your fermentation vessel in a cool or ambient place like a garage or shed. It is important that air can escape from the vessel but that bits of debris or flies can’t get in. The juice doesn’t need to be protected from air, so it’s a good idea to cover your container with a cloth.

“After around three days, the yeast that was naturally present on the apple skins should start to ferment the juice. This should result in a rapid bubbling of your juice. However, it may take up to seven days for this to happen. If fermentation has not occurred within seven days then it’s possible that there wasn’t enough yeast naturally present. To kick fermentation into action, take a teaspoon of dried baker’s yeast and mix with half a teaspoon of sugar and a little luke warm water. Leave this for 30 minutes, stir and add it to your apple juice. That should kick start fermentation.

“After a week or so, fermentation should die down and settle into a gentle pace. Leave the vessel undisturbed for three months and then recheck. Measure the specific gravity again using your hydrometer – fermentation will be complete when the SG reading is 1000, meaning all the sugar has turned to alcohol. Once this point is reached, seal your fermentation vessel.

“However, if you have a large amount of sediment (more than 2.5cm) in the base of your fermentation vessel then it is best to decant or rack the liquid from the container using a plastic siphon tube into another clean vessel and seal down the tops.” NB. Cleanliness is more important now because the initial fermentation process has taken place.

“Secondary fermentation (malo-lactic acid) will now gradually occur and it is best to leave the container/s for a further three months or more. After this point your cider should be ready. You can leave it in the original container until you are ready to drink or decant into smaller bottles (make sure they are filled up to leave only a small air gap) and drink as required.”

“If bottling, another option is to add half a teaspoon of sugar solution in each bottle. This causes a small secondary fermentation and makes your cider fizzy. But make sure your bottles and caps are suitable for this as pressure can build.”

My cider…
As of December 11, 2012, my apple juice was showing possible signs of fermentation but nothing obvious. I left it in the shed for a few days originally, which would have been fine if it were October but as it’s December the freezing conditions probably sent the yeast to sleep. It’s now in a warmer conservatory, so I’m going to give it a few more days. If nothing has happened by the 18th, I will take an SG reading, and if this indicates that fermentation is not happening, I will introduce some yeast to kick things off. I’ll keep you posted…

Thanks to…
…The School of Artisan Food, which is doing brilliant work to keep British food traditions alive, and to Simon Reed. The cider course I attended should be compulsory for all potential cider makers!