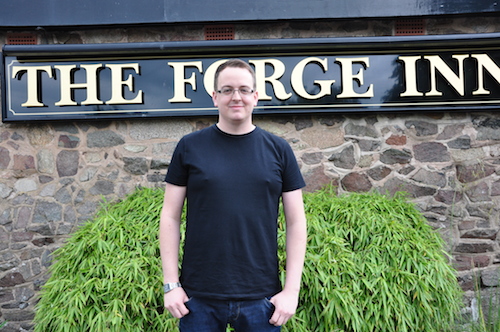 In Pursuit of Pub Perfection

“If you don’t love running pubs,” says Sam Hagger, “then for goodness sake don’t do it.”

The 30-year-old licensee of The Forge in Glenfield and The Rutland & Derby in nearby Leicester does love running pubs. In fact, he’s a bit obsessed. And he gets frustrated by some landlords who appear to be uninspired by their chosen line of work. For Sam, every detail has to be right, from the lighting, to the selection of spirits on the back bar, to the choice of ketchup.

“For any pub to be remotely successful it needs consistency, standards and a great product,” Sam says. “I get up each morning fired up to make those three things happen. I absolutely love it – last night I had an evening off but I couldn’t help coming in to the kitchen to watch the chefs. It’s not that I don’t trust them – I’ve got the best team I’ve ever worked with at the moment – I just can’t get enough!”

This enthusiastic approach has led to double-digit growth for The Forge for five consecutive years since 2008, when it had an average weekly turnover of just £6k. His other pub, the smaller Rutland & Derby in the middle of Leicester has seen similar growth. Sam runs both pubs under the Beautiful Pubs banner, which as a company is directed by Sam – who focuses on operations and business development – plus his father Steve, who looks after the commercial side. 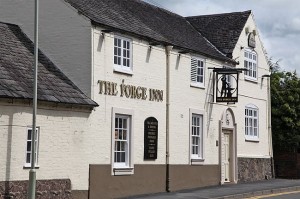 As well as being hands-on on the pub floor, central to Sam’s philosophy is regular re-investment, even when others think it could be unnecessary. In May, The Forge reopened after its second major refit in five years. What started out as a quick exterior facelift turned into a complete furniture overhaul, a major redecoration and the creation of a private dining room for up to 14.

Sam explains: “When we first took on the pub in 2008, Everards and ourselves put around £250,000 into the pub. This spring I started off wanting to give the exterior a lift but one thing led to another and my father and I ended up investing a further £65k.” Sam believes that regular re-investment is key to long-term success. “It’s so important to keep moving, to stay on top of the game,” he says. “A lot of pubs do well for four years, then tail off. I believe you have to keep up the momentum.”

The new private room – separated from the rest of the pub with glass and containing £4,000 worth of bespoke furniture – has certainly added extra momentum to the business. “It’s proving really successful,” says Sam. “On Sundays people hire it out for our ‘Host Your Own Roast’ menu. We serve a whole joint and we’ll carve it, or a member of the party can do it – we’ll even give them an apron and a chef’s hat if they want!”

People power
Sam first got a taste for life behind the bar aged 16 when he took a bar job in the pub he now runs. “I needed the work to pay my bus fare to get to my IT course at Leicester College,” he says. “But after working at the pub for three weeks I jacked in the course because I loved my new job so much.” Asking why he did this gets an instant response. “The people,” says Sam definitively. “There’s no job in the world that’s better for interacting with people and the reward for getting it right is amazing. As a pub, ultimately the guest is your reason for being, so everything you do has to be aimed at giving them what they want.”

Satisfy customer demand
Sam’s learnt a great deal since that first pub job 14 years ago. After finding his niche in the hospitality business and picking up the basics at The Forge, he joined Scottish & Newcastle and then Orchid Group, where he ran managed pubs and honed his trade. Today he’s still learning and voraciously reads everything relevant to his professional life. “Because of the refit I’m a bit behind,” he says. “But on my chair upstairs I’ve got months’ worth of magazines and papers to read – The Restaurant, The Caterer, Morning Advertiser, Bar & Pub, plus all the local press. I read the lot – it’s about being aware of what’s going on and showing that you’re a professional.”

Over the years, one big lesson Sam has learnt is that, to succeed, pubs must cater for their individual markets, not follow whims. He explains: “When we took on The Forge in 2008, the biggest seller was frozen jumbo sausage, eggs, chips and beans. We took the food from that to out-and-out ‘gastro’ but we soon realised that wasn’t right for our market. Glenfield has a varied mix of residents and many customers were used to value-led food served fast – within 15 minutes in fact. Many people didn’t want delicately constructed gastro-pub food. So we went back to basics but rather than frozen bangers, we sourced sausages from a nearby butcher, free-range local eggs from Wymeswold and homemade chips. We put our spin on what customers wanted. Even so, we lost a lot of the pub’s original customers but gained many more new ones too. We’ve evolved the menus from there and now there’s something for all tastes.”

Consistency is king
Sam focuses on consistency a great deal in his pubs – in terms of both service quality and food and drink. He believes in individuality but also in having certain standards and delivering them time and again because it gains trust and turns occasional visitors into regulars. “My aim is to run unique pubs but for customers to feel confident they’ll get the service, food and drink they expect whether they come on a Monday night or a Friday night,” he says. “We get a lot of bounce between our two pubs and that’s because I believe people know what they’re going to get.”

To help drive consistency, The Forge uses several different food and drink suppliers. Butcher Owen Taylor of Alfreton, Derbyshire supplies meat, preparing everything to the pub’s spec and sourcing from East Midlands farms; Deli Station in London supplies semi-roasted Italian tomatoes and Nocellara olives (“simply because they are the best tomatoes and olives I can find”); and food distribution giant Brakes supplies fruit and vegetables (“there aren’t many local suppliers who can deliver the amount of fresh produce we need on a consistent basis”). Meanwhile, over at The Rutland & Derby, the chefs get a lot of produce from Leicester Market. All of The Forge’s specials are made in-house, including the bread they’re served with. 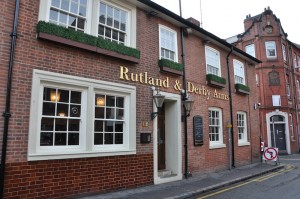 Drinkswise, alongside Everards Tiger, Beacon and Original, Sam’s swapped Heineken for Chapel Down of Kent’s Curious Brew lager, which he describes as a “good ‘talk-about’ beer”, exchanged Guinness for Stoke-on-Trent’s Titanic Stout, which is now selling better than Guinness, and he’s also recently added Full Back cider from Leicestershire’s Bottle Kicking Cider Company, which is going down a storm. Also behind the bar is a good range of deliberately British spirits from the likes of Adnams and Chase. “Everything is stocked for a reason,” explains Sam. “And then it’s about educating the team so they can tell customers why we’re stocking that product and the story behind it.”

Sam’s hands-on approach goes as far as spending 15 hours a week in his kitchens, where he writes the menus and keeps an eye on those all-important standards. “We offer seasonal menu changes but I also make intermediate tweaks – so I’ll remove dishes that haven’t done as well as we thought they might and make small improvements according to diner feedback. Then on Fridays and Saturdays we offer plenty of Specials, so there’s always a different meal for people to come back to. At The Forge, we see some customers coming in three times a week, whether for a lunchtime sandwich, an evening meal or celebration of a special occasion. We deliberately have an offer that can tick all of those boxes.”

The devil is in the detail
The depth of thought that Sam gives to customer experience is both impressive and surprising – for him, the commercial operation of his pubs is almost a science. Explaining more about the thinking behind the new refit, he says: “The décor is neither masculine nor feminine – that’s the balance we try to strike. With the lighting we wanted to make it more intimate at weekends and brighter during the week. And the furniture now feels heavier too. Pubs are not just about the food and drink, the foundation of the customer experience is critical too.”

But it’s not all hard commercial science. As part of the redecoration, Sam had his late grandad’s old chair restored, which now sits near the bar. “Grandad never got to see the pub when I was running it so it’s nice to have his chair here,” says Sam. This nice little touch shows just how close to the heart pub life is to this passionate perfectionist.