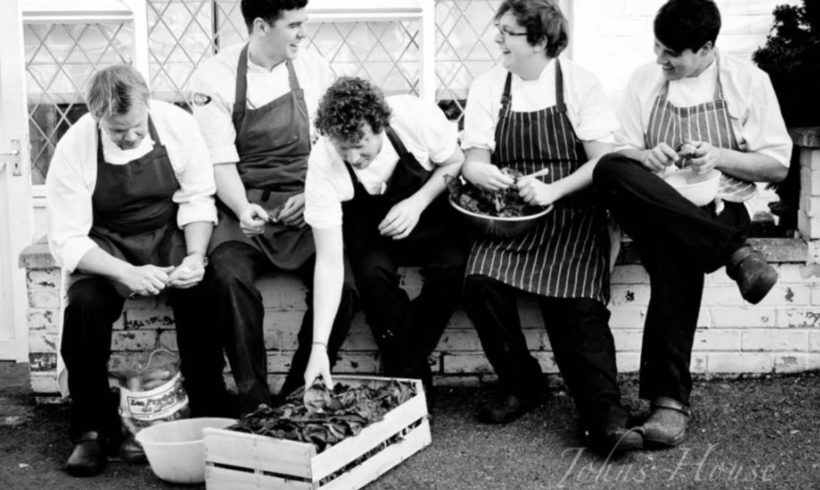 The John's House team, with John Duffin in the middle

Stonehurst Farm is well known – in the area between Leicester and Loughborough at least – as a pleasant little farm park where you can connect with animals, visit a motor museum, pick up produce at the farm shop and enjoy a cup of tea and slice of cake. 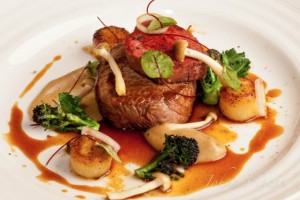 One of the dishes served at John’s House

Now, though, it’s likely to get an even higher profile among food lovers with the opening of fine-dining venue John’s House. Chef John Duffin returned to his family farm to open his own restaurant in December after spells with Simon Rogan at Roganic, plus Claude Bosi and Marcus Wareing. Duffin promises to use plenty of produce from Stonehurst Farm and the local area, and his first menu bears the imprint of current restaurant priorities such as local provenance, nose-to-tail eating and adventurous flavour combinations. Stand-out dishes include parsnip dumplings, braised oxtail, madeira and ox tongue; Stonehurst hogget, wood blewits, onions and thyme; crispy pig’s head terrine with confit egg yolk, bacon and parsley; and carrot sorbet yoghurt, licorice and mint.

At the time of writing, GFC has not visited John’s House but judging by the ambitious pricing – £47 for dinner, £70 for the eight-course tasting menu and a wine list that includes Penfolds Grange 1985 and Chateau Mouton Rothschild at around £750 – Duffin is not messing about here. Early reports suggest this could be a realistic attempt at gaining a Michelin star for Leicestershire. 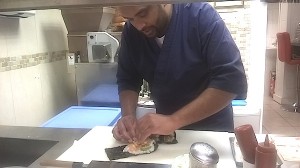 At a somewhat less rarefied level, Leicestershire diners have also been getting excited about a tiny sushi bar called Kuru Kuru. Run by a time-served sushi chef from Sri Lanka, it’s a blink-and-you’ll-miss-it shop-front on Welford Road in the city centre and inside there’s barely room to swing a, erm, mackerel, but it’s worth finding. I had an outstanding lunch with a huge variety of sushi, sashimi and more, highlights being the soft-shell crab, eel teriyaki and a crispy salmon skin hand roll. I’ve had a number of further reports praising the freshness and value for money. If you can’t get down there, they do deliver.

Leicester’s Clarendon Park area is the kind of place loved by estate agents for its ample housing supply, closeness to the university, and a high street – Queen’s Road – with high quality independent retailers. But it could also be argued it has punched below its weight when it comes to restaurants. 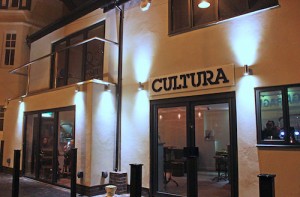 So there’s general excitement at the opening of Cultura, a joint venture between chef Tom Boarder and local businessman Bob Lewis. Local boy Boarder started off in the kitchen at nearby Barcelonetta, going on to work with the likes of Jamie Oliver and later Carluccio’s. His partner Fern Bennett has wide experience as a restaurant manager and is currently heading up front-of-house. They have extended the building to create a stylish downstairs bar and upstairs restaurant serving light, modern European dishes with something of a Mediterranean feel, with the first menu featuring the likes of pan-fried rainbow trout with prawn and vegetable ratatouille; and baked ricotta with figs, black pepper, honey and spicy chickpeas – “full of big, bold flavours, imaginative and unashamedly innovative” was the enthusiastic response of one local blogger.