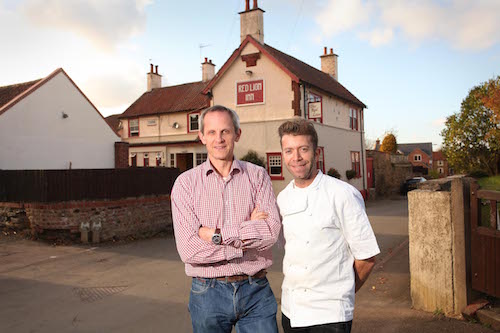 The Red Lion Inn at Stathern, Leicestershire, began a new chapter yesterday (March 3) with Mark Barbour returning to take the reins. It is a happy homecoming for Mark, who was general manager at The Red Lion from 2002 to 2006 when the pub won many awards, including the title of AA Pub Of the Year and The Publican Food Pub of the Year. He returns to a pub that was recently named Good Pub Guide Leicestershire Dining Pub of the Year 2015.

The Red Lion Inn is co-owned by Ben Jones and Sean Hope, who also own The Olive Branch in Clipsham. Ben and Sean will continue to be involved in the Red Lion Inn but will start to step back to concentrate on other areas of the business.

Ben Jones said: “We are delighted to have Mark back with us. He was a great manager 10 years ago and he has gained a wealth of experience since then. We are really excited about his plans for the Red Lion and we know he will be welcomed back by all the customers who remember him.”

Mark started his career at the award-winning Hambleton Hall in Oakham before joining The Red Lion in 2002. In 2007 he left to become company training manager at Le Bistrot Pierre Group, where he also managed three different sites and opened its flagship hotel in Ikley. Since 2013 he has been general manager at the award-winning Fleece Inn at Addingham, West Yorkshire.

Mark said: “I’ve always had an affection for the Red Lion and the customers I met during my first spell here. My family and I love the area too, so I’m really excited to be back in the Vale of Belvoir. I’m also happy to be working with Sean and Ben again and I’m looking forward to bringing some new ideas to the table to take the Red Lion forward.”