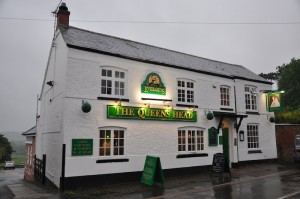 The Queen’s Head in Saddington, south Leicestershire, has opened its own farm shop in a converted outbuilding.

The shop is a joint enterprise between tenants Chris Lewis-Sharman and Julian Benton and pub owner Everards and sells a range of produce made in the pub’s kitchen, plus store-cupboard essentials and more.

It is Saddington’s only shop. The previous nearest was the Co-operative one-and-a-half miles away in Fleckney.

The Queen’s Head Farm Shop’s initial opening hours will be 9am to 2pm, seven days a week.

Chris Lewis-Sharman, also the pub’s head chef, said: “There’s been lots of interest and positive feedback from locals and regulars who are really pleased to be getting a shop back in the village. We think it’s a positive move that’s great for the community and we are confident it will bring in more business for the pub, too. Everards have been extremely supportive of the project and together we have made it happen. It’s a good news story at a time when many rural pubs are closing.”

He continued: “We’ll be making as much of the stock ourselves as possible incuding jams, pickles, chutneys, homemade pies, plus locally sourced meats cured in-house, like ham and bacon. There’ll also be local eggs, fruit and vegetables, bottled Everards beers, wines and pressés, and plenty of essentials. The shop will serve tea and coffee and we may add a Post Office-style parcel drop facility, too.”

Everards funded the building of the shop, which measures around 14ft by 3ft, in a £12,000 investment, and Chris and Julian also secured around £3,000 of funding from Leicestershire County Council.

Everards business development manager Mike Brown said: “The shop gives people more reasons to visit the pub and we think the villagers will appreciate it. It means The Queen’s Head becomes two businesses in one and we think each will feed in to the other.

“This development ties in with our ‘Artisan’ scheme, where we work closely with local artisan food producers. It could become a template for other rural pubs.”

The Queen’s Head is part of Great Food Club