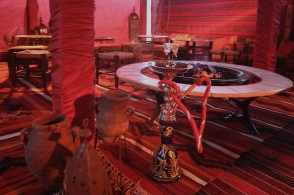 Around 20 of us on a night out from work went to Habibi’s Arabic restaurant in Coventry. There is no alcohol licence, but you can take your own, so being journalists we arrived weighed down with bags of booze.

Habibi is tucked away in the city’s historic Far Gosford Street behind an unimposing shop front. Inside, it is like taking a magic carpet ride to the Middle East. We ate in the Bedouin tent in the garden, with its Arabian furnishings, woven rugs, low level seating (best to wear trousers), brass-top tables, Arabic music and rows of fruit sheesha pipes. Sometimes there are belly-dancers!

A couple of us were driving so started with Hibiscus tea, served iced with sugar to taste. The selection of dishes we had ordered to share, mezze style, soon started to arrive.

There was warek enab (vine leaves stuffed with rice and herbs), hommous with khobez (Arab bread), falafel with yoghurt dip and a variety of other spicy vegetables and salads.

I did not always know what I was eating and was in too much of a hurry to find out, but all were tasty and flavoursome, and while some had an unexpected kick, they were never too hot to taste the different spices.

We finished our meal with a sticky and scrumptious selection of baklawa (sweet pastries) and mint and cinnamon teas served in spectacular brass Arabian tea kettles from which you expect a genie to appear!

I had my first smoke of a shared sheesha pipe (mixed fruits), while the party next to us were having a go with the Arabian drums. 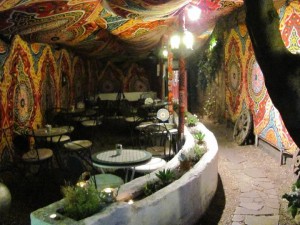 All the food served at Habibi is freshly prepared on the premises and inspired by the recipes that owner Manal Timraz grew up with in Palestine. Eating here is a cultural, fun experience. On the Saturday night we visited, there was a great atmosphere and, in the Bedouin tent, it was more like joining a big, boisterous party than simply dining out at a restaurant. 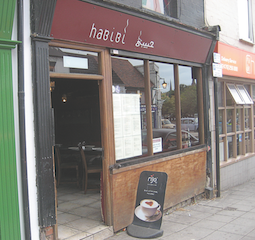