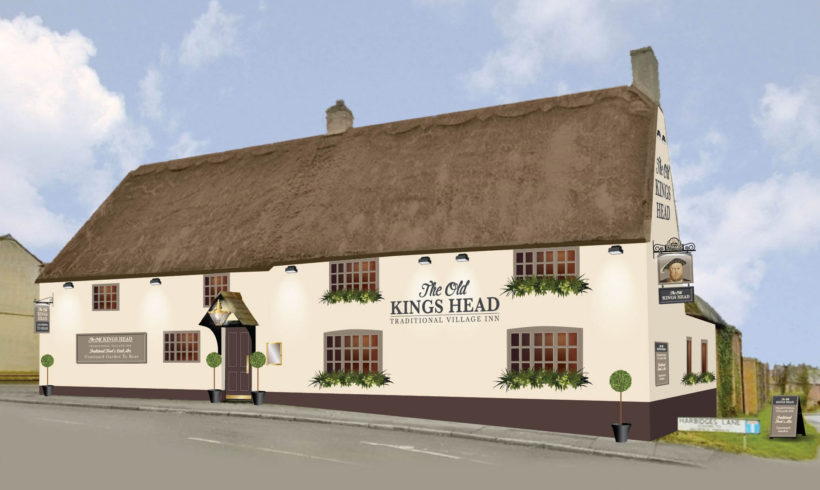 In 2013, the future looked bleak for Grade II-listed pub The Old King’s Head in Long Buckby, Northamptonshire. It opened sporadically and when it did most villagers were put off by the banging music and flashing lights, which illuminated a sparsely populated bar. And when the doors closed in July of that year, many feared another village pub had bitten the dust.

But happily a simple change of direction has proved there’s plenty of life in the Old King’s Head yet. In August 2014, Everards bought the pub and new licensees Katie and Matt Tombs took over. Out went the disco lights and in came Matt and Katie, accompanied by a team of builders and decorators intent on rediscovering the pub’s soul. The vision was to give Long Buckby its traditional village pub back, and that aim has been met.

“The village was crying out for a decent pub that offered good food and good beer,” says Katie. “There are 6,000 people in Long Buckby and they were all having to drive six miles out of the village to find a decent place.”

In the autumn of 2014 The Old King’s Head was gutted and redecorated, with Matt and Katie having a big say in the new look. “The revamp felt like it was going on forever but suddenly all came together,” says Katie, who’s a local girl with roots in Market Harborough. “Feedback from the village was instantly really good. The consensus was that Long Buckby had got its pub back again, and everyone felt at home and comfortable here.” 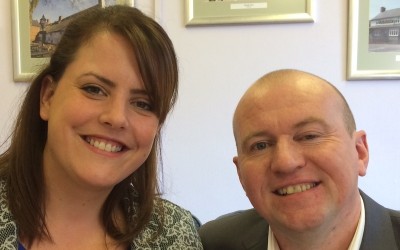 Interestingly, neither Katie nor husband Matt had run a pub before becoming licensees of The Old King’s Head. Katie was previously a director of sales and marketing for a large hotel group, and Matt still works in IT, helping out at the pub when he can. Katie explains: “There were too many risk factors for us both to give up our jobs straight away, but in the future, who knows?”

She continues: “Our first taste of working pub life was during a ‘Try Before You Buy’ session that Everards arranged for us, where you shadow an experienced licensee for two days. We threw ourselves into it and came out feeling jaded and achy but happy.”

Despite their limited experience, Katie and Matt had a strong vision for The Old King’s Head, having done their research and come up with what they thought would work well in the village. “As well as being passionate about creating a traditional village pub that served good beer, we also wanted a 100% fresh kitchen,” says Katie. “So we spent a long time looking for a good chef because we needed someone who is passionate about British food.”

That chef turned out to be Dominic Simmonds, who had been running his own pop-up restaurant in Birmingham called Blue Rabbit, specialising in classic pub-style food with a twist. His style fitted perfectly: “It’s important for us to serve classic pub dishes because that’s what customers demand,” says Katie. “It’s also critical our food is freshly cooked using great-quality ingredients, so we use produce like Long Buckby beef, and all breads and ice creams made in-house.”

If you’re reading this and harbour a secret ambition to run a pub yourself, you might be wondering how a couple with no practical experience goes about becoming the driving force behind a successful village pub within months?

Katie explains: “We’d always talked about running a pub and in my old job I was working long hours to line someone else’s pocket so thought I’d be better off putting the hours in to build my own business. So in January 2014 we started doing online research to see if running a pub would be feasible. We spoke to quite a few landlords too and Everards came out with the best testimonials by far – head and shoulders above everyone else. So we contacted Everards’ recruitment team and it started moving from there.

“They walked us through the whole process but we’d done our homework first. That was key. We knew it wasn’t going to be an easy industry to work in and went in with our eyes open. Lots of people think you just stand behind the bar chatting to locals, but your day starts at 9am and finishes at midnight, and you’re always on call. It’s a lifestyle, not a job. That said, we’re loving it! And we’ve been much busier than expected – it’s been sink or swim at times – so training our staff up to a level we’re happy with has turned out to be one of the most important things we’ve done so far.”

Katie has found a new passion in her new business too: “I absolutely love the beer cellar, which has completely surprised me because I didn’t touch beer before I came here,” she says. “During training Matt was more cellar-focused and I was more front-of-house, but now I don’t let him near the cellar and I adore my ales! I get such a kick when people say I’ve served them a well-kept pint – I heard two guys the other night saying the beer’s great in here nowadays and that was wonderful to hear.” In fact, Katie has become so passionate about cask beer that she’s launched a real ale club where members vote on what guest brews to order in.

Whether they are coming for Katie’s perfectly kept beer, Dominic’s food, or the welcoming, friendly atmosphere, it’s fair to say that Long Buckby residents have got their village pub back and that its future looks rosy.