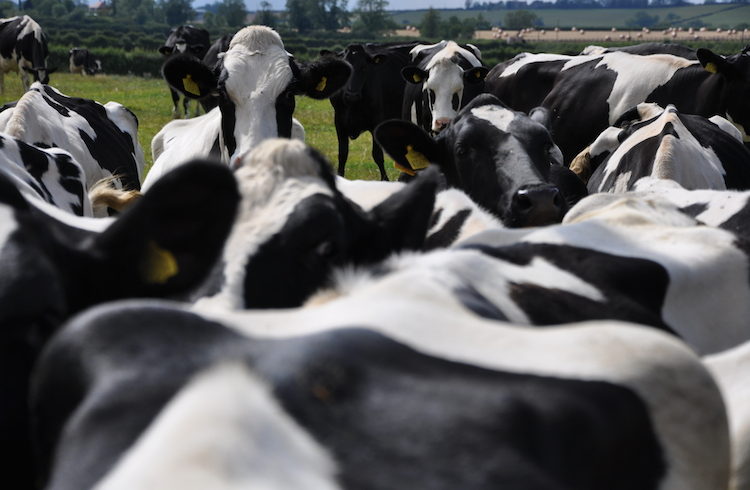 Dairy cows in Hickling, on the Notts/Leics border – part of the Midlands army of milkers that supply Long Clawson Dairy

Pies. Tons of them. Over 900 chunks of lard-infused goodness, including 50 Melton Mowbray, 40 Beef and Stilton, and one Eel and Chocolate (true). It was while surrounded by these, judging at the British Pie Awards – held annually in Melton Mowbray – that I started to mentally plan my food road trip of Leicestershire, Rutland and Lincolnshire.

So, where to begin? Counter-intuitively, with ferrets. After moving to Melton Mowbray ten years ago, I was accosted – jollily – by a chap walking one on a lead. The incident occurred near to the town sign welcoming visitors to ‘The Rural Capital of Food’, so this is where we’ll start. 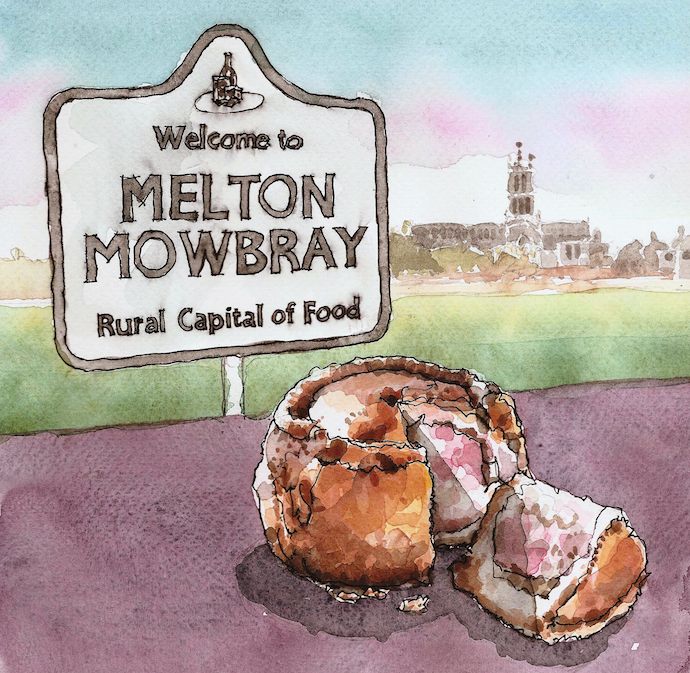 Amazing market
I mention the ferret because the owner acquired it from the town’s extraordinary weekly farmers’ market. This ancient town centre institution – location of the Melton Mowbray Food Festival and home to Round Corner Brewery since 2018 – offers the food shopping equivalent of a double chilli vodka. Where supermarkets dull the senses, Melton market slaps you around the cheeks. A collection of huge open barns, up to 6,000 sheep and 300 cattle are sold here weekly via farmers’ mysterious hand signals. It’s not just livestock – also on sale are pies, beer in Round Corner’s tap room, cheese, meat, honey, fish and veg. But my favourite part is the Fur and Feather auction, where you can buy a brace of pheasant for around £1.60, or a freshly shot hare for £3. Waitrose this ain’t – it feels like stepping back in time. You could even buy a live ferret if you so desire. 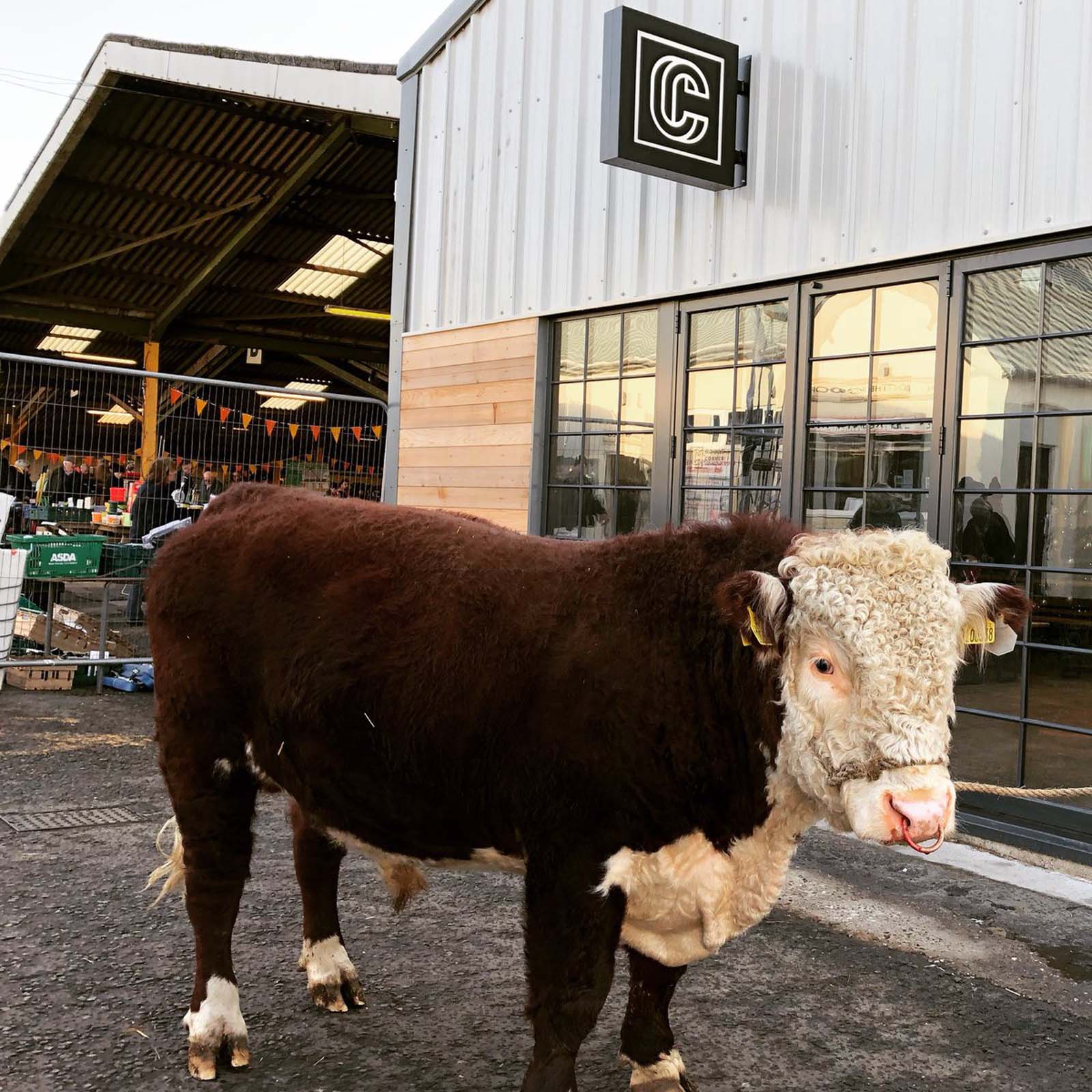 Stick your pheasants in the boot: we’re heading north into the Vale of Belvoir (pronounced ‘Bee-ver’ – GCSE French-style interpretations may be ridiculed). As you drive, look for numerous Long Clawson Dairy signs marking farm entrances. Clawson Dairy, in heart of the Vale, is a farmers’ co-operative and is the largest producer of Stilton in the world. It makes 6,700 tonnes of cheese a year using 58 million litres of milk extracted from 42 herds, all grazed within 25 miles.

Belle vue
The Vale of Belvoir is beautiful, a prime example being Branston village, home a pretty country pub – The Wheel – as well as Manor Farm Cookery School. When I travel from Branston to Plungar, home of Dickies Farm Dining – an on-farm eatery and butchery – I love the way the entire Vale unfurls before you, a farmhouse tablecloth of lush green fields. The ideal drop to drink while taking in this view would be Stilton Porter fromSarah Barton’s Brewsters Brewery of Grantham. 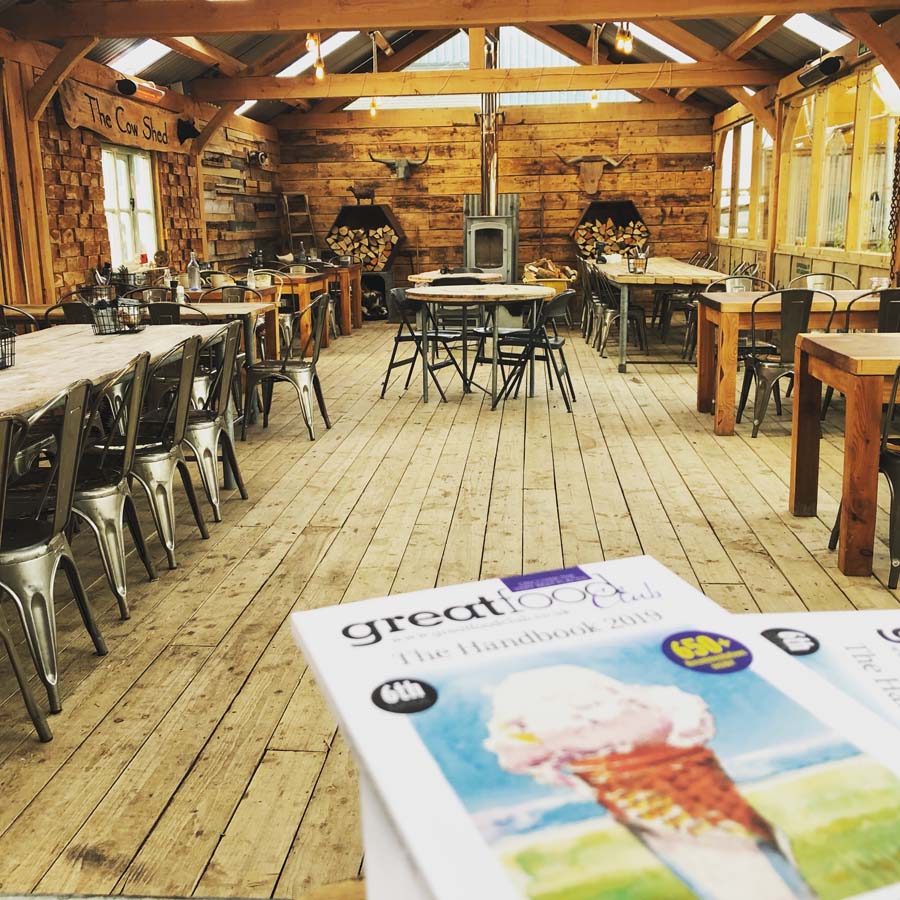 Inside the Cow Shed at Dickies

To the fens…
Onwards to Lincolnshire. Heading east from Leicestershire, through Rutland and into Lincs, I’m always taken aback by how quickly the atmosphere changes. Rolling hills vanish, the sky lengthens, dykes appear by road sides and fields fill with sugar beet, cabbages and barley. It’s flat, occasionally eerie and sometimes strangely beautiful. 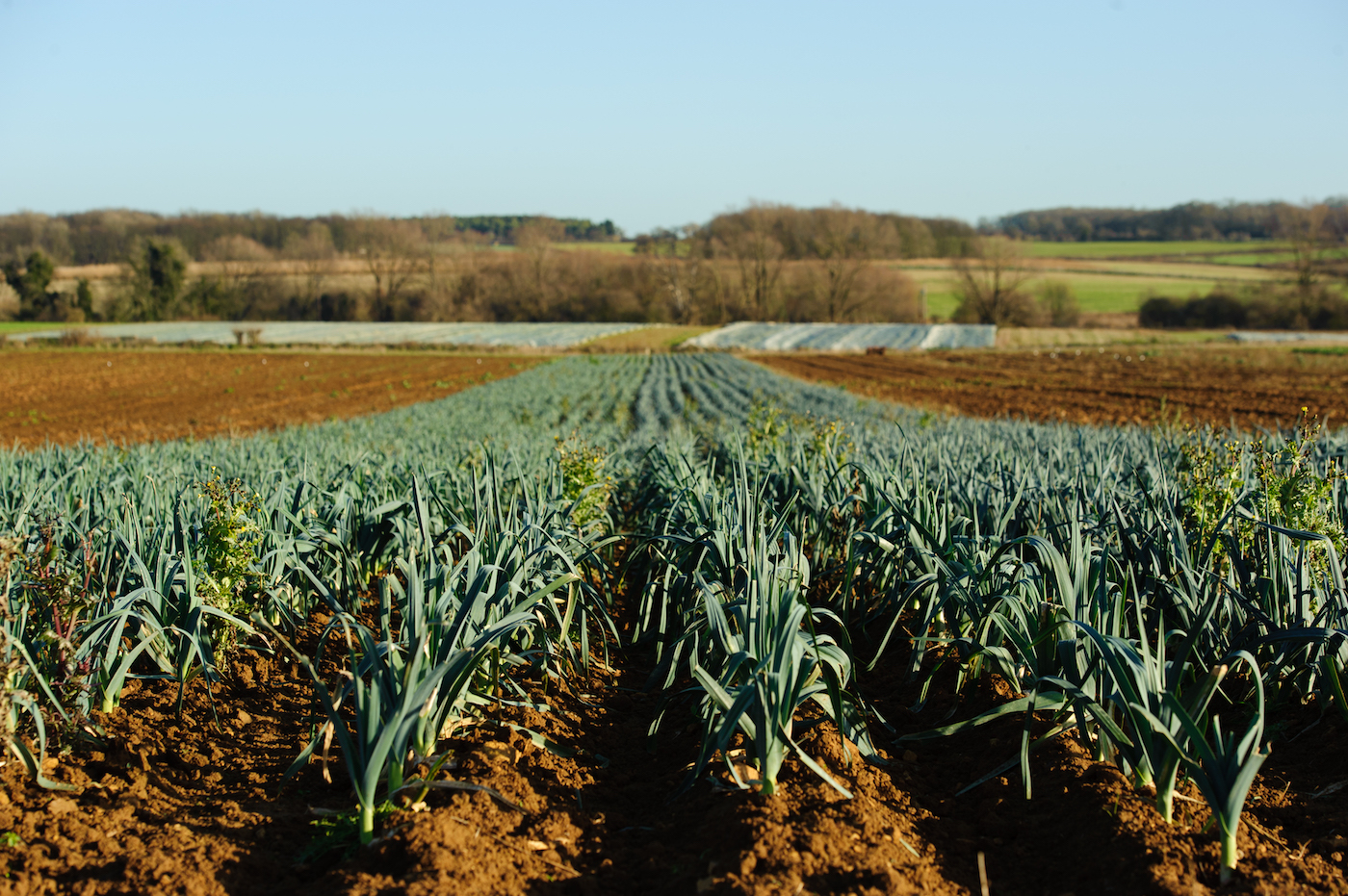 In south Lincs lie acres of English mustard fields. For at least 200 years, the flatlands here have produced almost the entire English mustard crop, supplying Colman’s since 1814. While visiting this area recently, a local grower called George Hoyles told me an amazing tale. “When the Pilgrim Fathers set sail from Boston, Lincs in 1623 to discover America, they used to pray six times a day,” he said. “They took mustard seed because, as the bible says, it is the smallest, fastest growing seed. Whenever they prayed they threw down seed so they could retrace their footsteps. These mustard trails can still be picked up by satellite photography today.”

The Lincs coast
We’re now venturing north-east to the Lincolnshire coast, above the Wash. On the salt marsh at Kirton Skeldyke near Boston sprouts samphire. I used to think the land felt barren out here, but during one samphire hunt last year, I looked more closely to discover a salt marsh humming with life and transmitting strange tranquility, its lifeforms and vistas ebbing and flowing with the tide. Samphire in the bag, what to serve it with?

There can be few more authentic Fenland ingredients than smoked wild eel, traditionally trapped in Lincolnshire’s rivers and estuaries. Just above Boston, at Friskney, is Smith’s Smokery – and there’s nowhere better to get your smoked eel. Further north, the coastline from Anderby Creek to Skegness comprises mile after mile of golden sand – a beautiful place for blanket and hamper, but don’t expect shops or pubs. 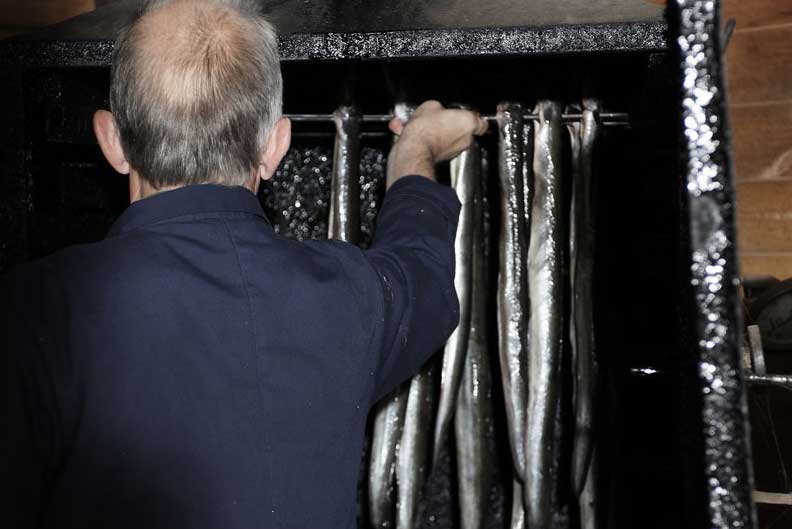 Loading the smoker up with eels at Smith’s Smokery

Continue north beyond Skegness, dip inland to Alford and a surprise awaits. Cheese is not associated with Lincolnshire, but the county produces three stunners. Near Alford graze cows whose milk is fermented into Lincolnshire Poacher – a hard, fruity, nutty Cheddar-like cheese. A few miles north-west is Osgodby, home of Cote Hill Blue – one of my favourites – sometimes referred to as British Roquefort. 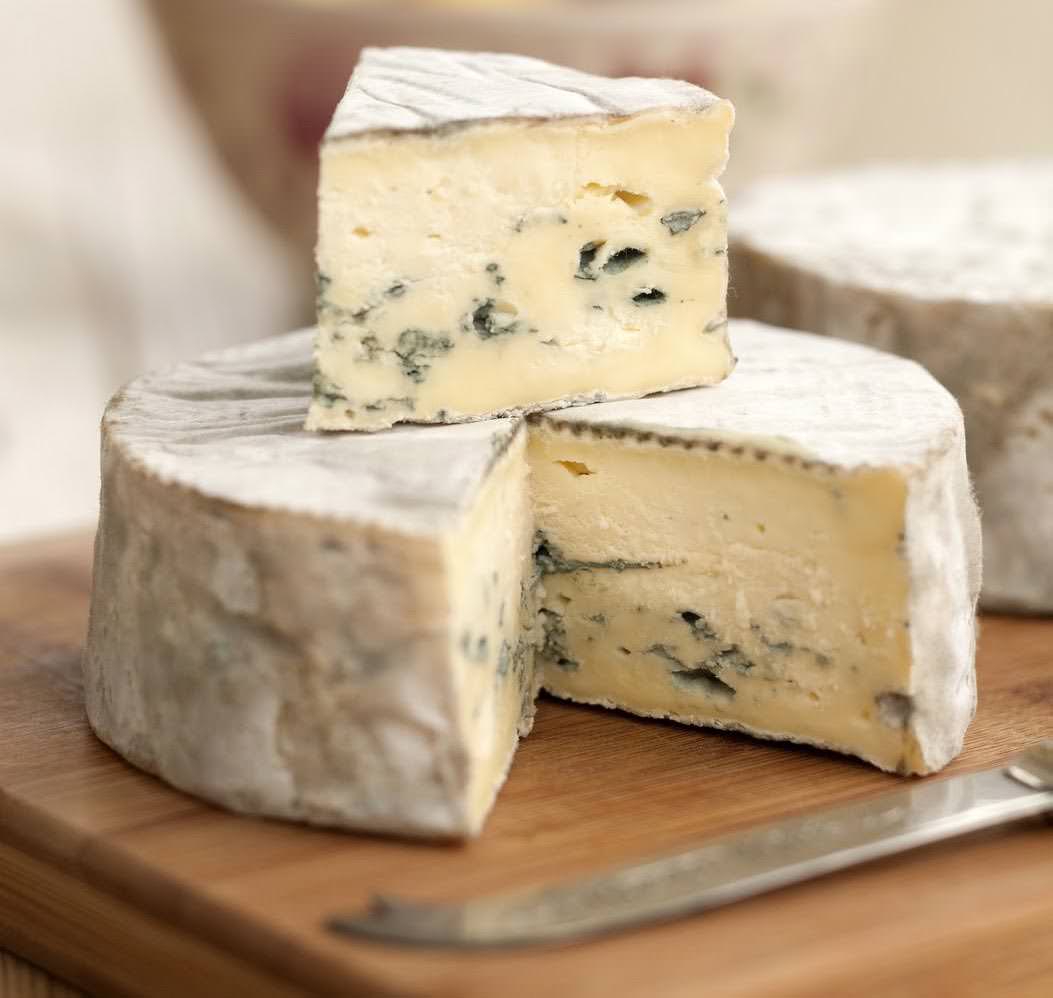 Special towns
Before we leave Lincolnshire, we must cram in Market Rasen, which became one of Mary Portas’s Pilot Towns. This town of 5,000 is also home to Sunnyside Up Farm Shop, famous for Lincoln Red beef, a native cattle breed that produces sublime steaks.

What should you serve with your Lincoln Red? I’d go for a local beer every time – try Steeplechase from Round Corner Brewery of Melton Mowbray. Suitably refreshed, it’s south to Stamford – in Lincolnshire but on the edge of Rutland. I grew up in this town and it is best summed up by three very noble things: church spires, old stone buildings and pubs. While there, do visit the Tobie Norris, an outstanding and brilliantly restored boozer that dates back to 1280. 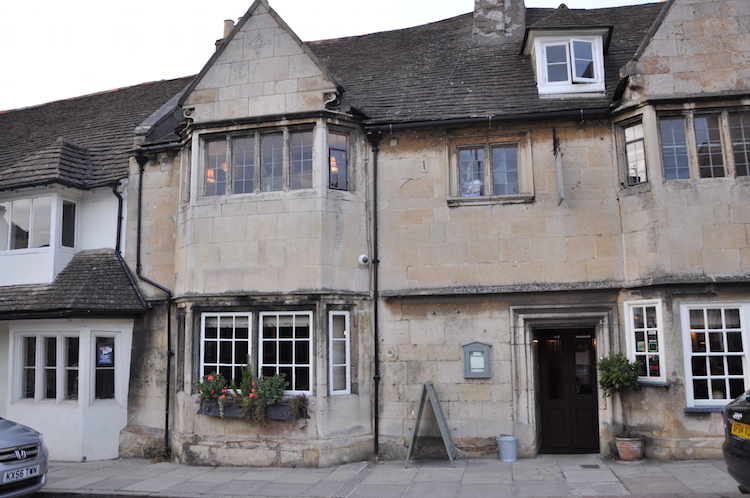 The Tobie Norris in Stamford

In parvo multum
It would be wrong to end this food trip without venturing into Rutland, England’s smallest county but packer of a weighty food punch.

In the north of the county spins Whissendine Windmill, run by (and personally restored by) one of the food world’s true characters – miller Nigel Moon. Born in the wrong era by several hundred years, Nigel stonegrinds flour and sells some of it to Hambleton Bakery, which bakes award-winning breads and cakes – including its famous Rutland loaf – in a giant oven in Exton. 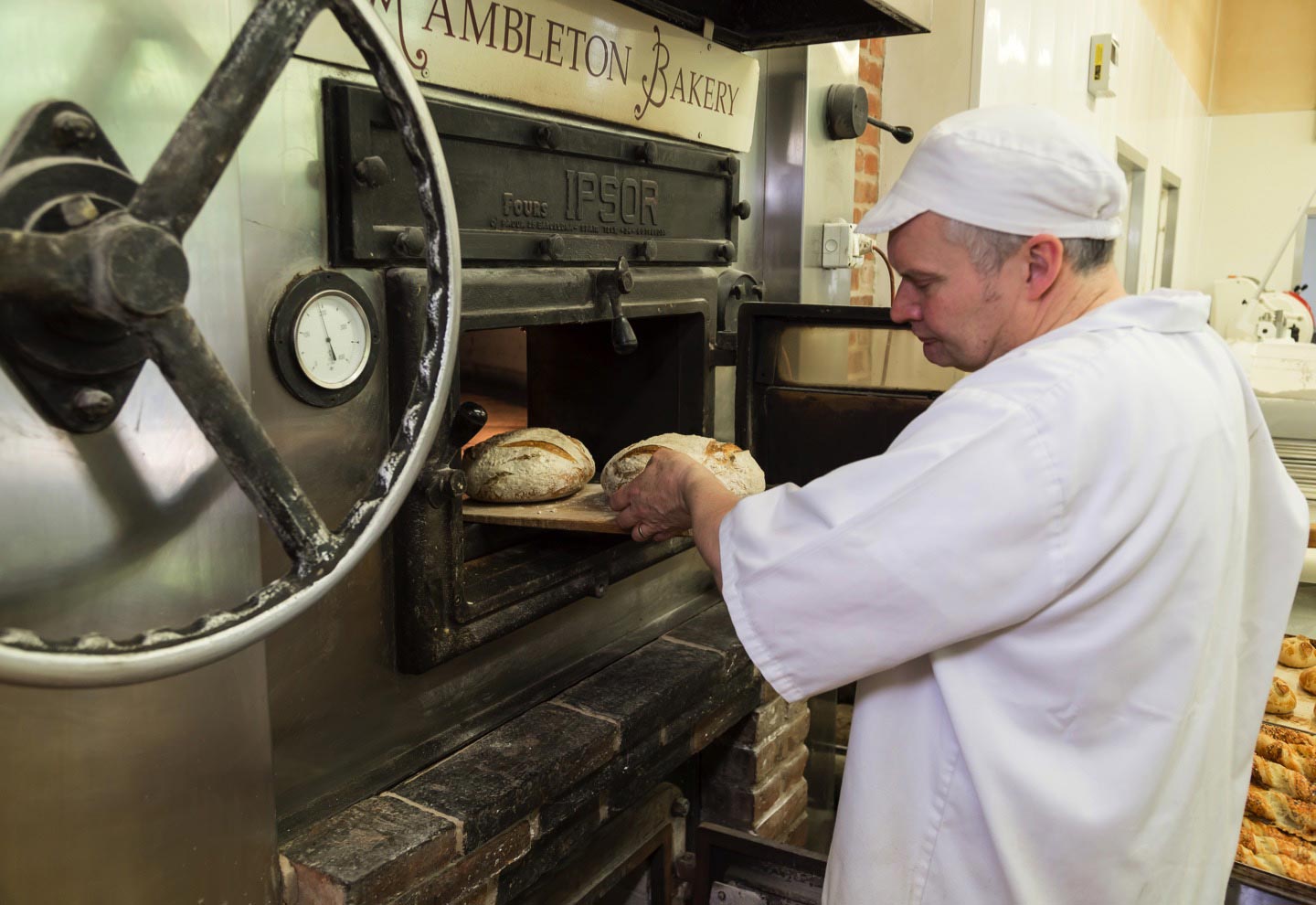 But for me Rutland is all about great country pubs. For truly local cooking, The King’s Arms in Wing is hard to beat. Run by James Goss, who has a small smokehouse out the back where he smokes everything from Rutland trout to Mangalitza pork, it’s a hidden gem.

There are many more (the truly excellent Olive Branch and The Jackson Stops) but we can’t mention Rutland without referring to The Grainstore of Oakham, which brews great beers and is also a brewery tap. A rough-around-the-edges sort of place, I enjoy dipping into the bowls of nuts that pepper the bar and sipping a pint or two of Ten Fifty. Rutland is also good for pies, with Northfield Farm of Cold Overton and Hambleton Fine Foods of Oakham all making crackers. But now we’re back to the British Pie Awards, and I’m getting sweaty palms and flashbacks.

Our food tour must end here. 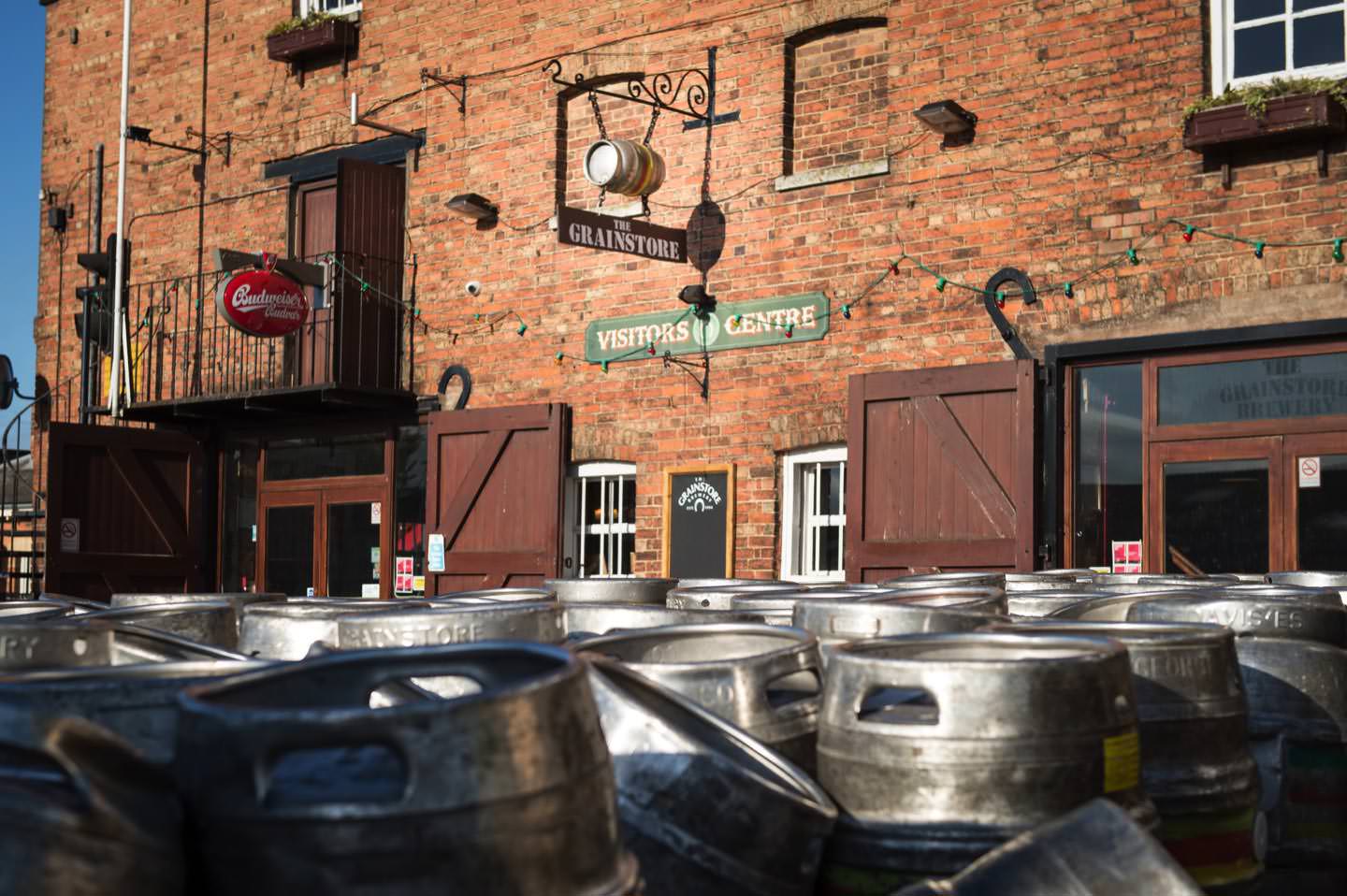 Stonepits Farm, Wycomb,  Leics
Smallholding in pretty village with rare Visit Britain Gold Award that rears much of its own meat, bakes its own organic bread and makes home-made jams. 01664 444597 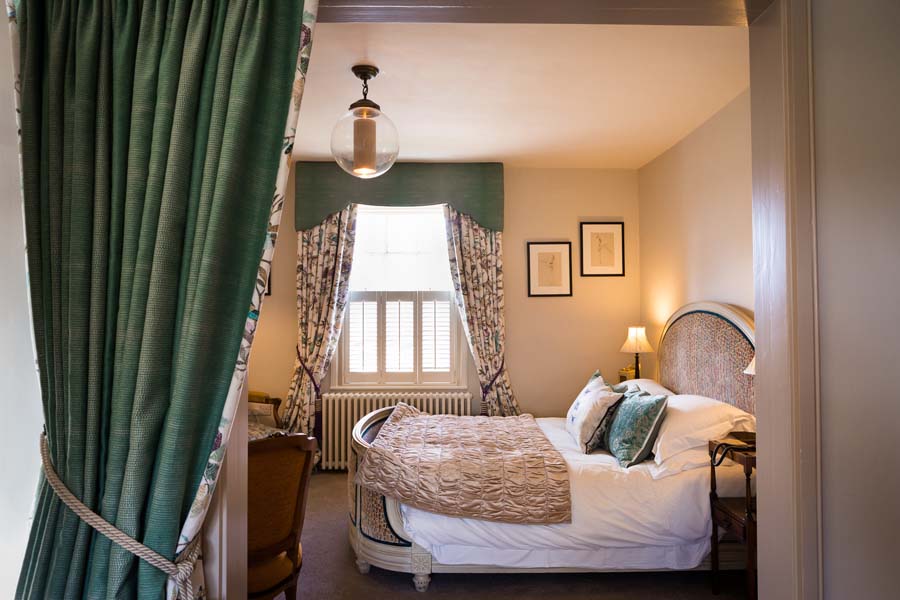 Food shops to check out…

Farm shop: Farndon Fields, Market Harborough, Leics
It all started in 1983 when Kevin and Milly Stokes opened a small shop in the garage of their 250-acre farm. Now one of Britain’s biggest and best farm shops. 01858 464 838

Butcher: Redhill Farm Free Range Pork, Gainsborough, Lincs, plus a farm shop on Lincoln’s Bailgate
Pork only, but what pork! Redhill Farm is a pioneer of high-welfare outdoor pig farming, and its sausages, black pudding and pork steaks are widely regarded as some of Britain’s best. 01427 628270 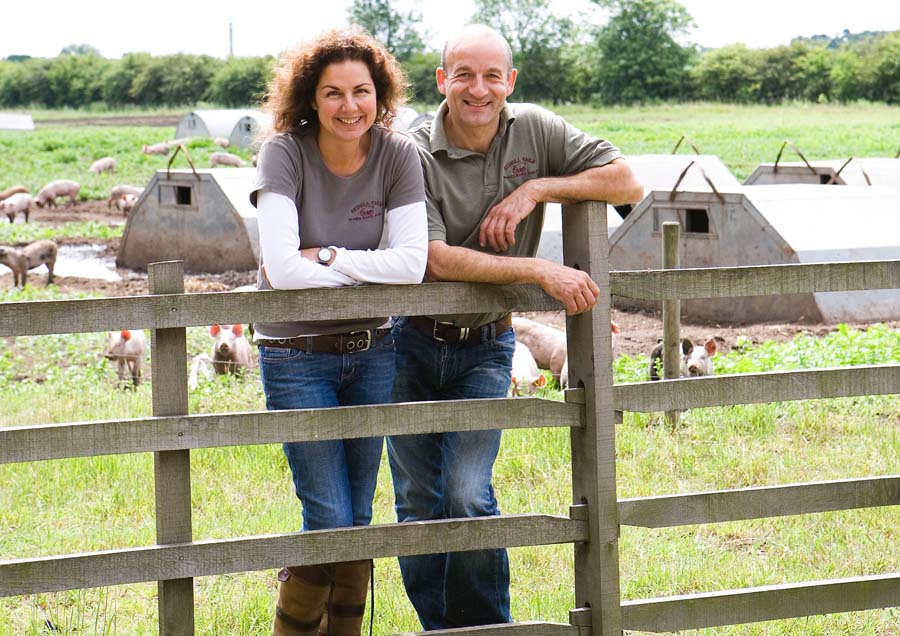 Cafes and restaurants to explore…

Linfords, Market Deeping, Lincs
Linfords serves the best fish and chips in the East of England, according to the 2012 National Fish & Chip Awards. Gluten-free options are available too. 01778 347970

Castle Cottage Café, Oakham, Rutland
Pretty little café hidden away behind All Saints’ Church in Oakham. This is a great spot for coffee and breakfast, including a superb Rutland Sausage Sandwich. 01572 757952

The Olive Branch, Clipsham, Rutland
A divine combination of friendly country pub – serving classic and unpretentious pub food – and top quality cooking. Eating on the terrace as the sun sets takes some beating. 01780 410355