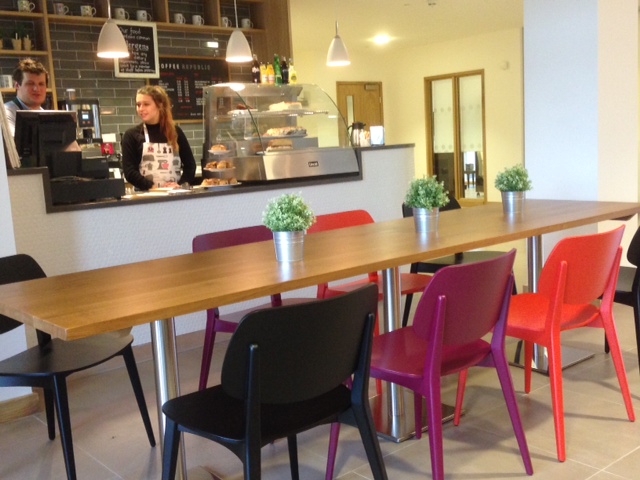 When Flic and Barny Luxmore from gourmet toasties street van The Jabberwocky announced they were opening a restaurant, I knew it would be something a little different.

By teaming up with The Cake Doctor – aka James Fedden – the trio have gone out of central Leamington’s shopping district to a residential area on the edge on of a retail park in Leamington. Going back to Alice in Wonderland for their new restaurant’s name, The Mock Turtle is now open and brings a mix of their signature toasties and cakes as well as some classic dishes.

A small but thoughtful menu highlights tasty options for breakfast, lunch and afternoon snacks. You’ll find some British favourites like sausages and mash alongside crayfish and avocado salad and even Sunday roasts.

When I visited, the set lunch menu included a Warwickshire hotpot with the hero ingredient being Lighthorne lamb – slow cooked with black pudding, onions, leeks and carrots topped with sliced potatoes and served with buttered spring greens. The prices are a very reasonable £6.50 for one course or £9.50 for two. You can snack on a tasty breakfast bap for just £3, tuck into three smoked salmon  fishcakes with salad for £5.50, or a single stack beef burger with Monterey Jack cheese and relish with fries for £5.50. With decent portion sizes, The Mock Turtle offers excellent value for money. 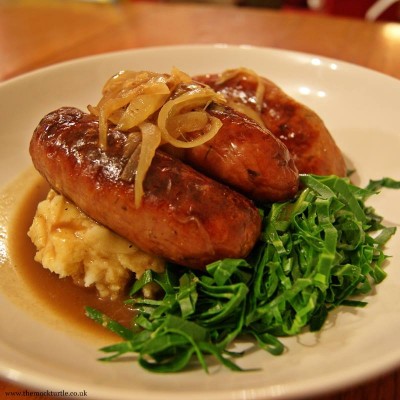 The Mock Turtle’s sausages and mash

With an inviting cake stand boasting the likes of carrot cake and Guinness and chocolate cake, as well as brownies, I chose a triple decker wedge of the Victoria sponge for just £2.50. James bakes all his cakes in-house daily and offers a choice of at least four a day.

The freshness and provenance of high quality ingredients is key to the kitchen, who use local suppliers such as Regency Fish and Becks Butchers in Leamington and bread from West’s in Wellsbourne. This also helps the menu to be seasonal.

A team of eight man the 40 or so seats in the café and 26 in the restaurant. Both are decked out with cheery red and burnt orange upholstery, the well-spaced tables giving an open view from the coffee counter at one end of the room through to the restaurant at the other end. 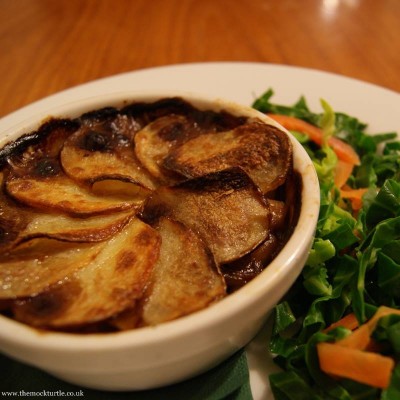 Fear not street-food fans, the opening of The Mock Turtle doesn’t meant that The Jabberwocky and Cake Doctor are parked up for the summer, as they will both be making appearances at some local food festivals later in the year.

The Mock Turtle’s location, on the ground floor of an assisted development for over-55s, may at first seem an unusual place to open a new café and restaurant. Only time will tell if the opportunity to connect the 250 Queens Court residents with Leamington Old Town is a shrewd move. As The Jabberwocky and Cake Doctor have already proved though, people will travel to eat great food.