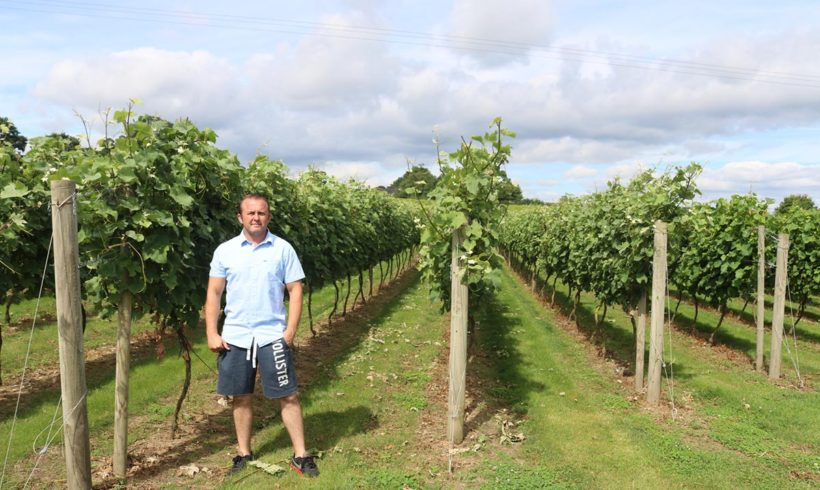 Above: Lee Dyer at Winbirri Vineyard

As soon as I heard that Winbirri Vineyard in Surlingham, Norfolk had won the title of UK Wine of the Year 2016, I picked up the phone and made an appointment to visit. Having recently read that English wines are now ranked fourth in the world, I was intrigued to find out more about England’s emerging success story.

The entrance of Winbirri Vineyard has a pair of large metal gates, reminiscent of a French vineyard. A little further up the track, rows of immaculate, well-pruned vines come into sight. It’s at this point you realise that Winbirri Vineyard is a serious operation. It hasn’t always been that way, however. About 10 years ago Steve Dyer planted some vines to further his hobby. When Steve’s son Lee returned home from Thailand, little did he know where his dad’s hobby would lead.

In 2009 Steve and Lee made the decision to go for it and they haven’t looked back. Every year they’re finding more south-facing land on which to plant more and more vines. The effects of global warming mean the UK is now delivering optimum conditions to grow certain types of vines. This is why wines made on these islands have moved up the ranks into fourth place.

Maintaining a high quality vineyard is an exceedingly manual process that requires precision timing. To achieve optimum results, the vines have to be managed and treated with care. There’s no place for big, heavy machinery in the Dyers’ vineyard. Incredibly, Winbirri maintain the vineyard with a core team of just 10, mostly family members. When you sit down and quaff a glass of wine at the end of a day you really don’t fully appreciate how much love and attention has gone into it.

During my tour it became apparent that Lee is a self-confessed competitive control freak who believes that if you’re going to do something you’ve got to be the best. Lee’s drive and determination has resulted in Winbirri wines achieving many awards and accolades including UK Wine of The Year 2016. Having spent time with Lee, I don’t think his ambition stops there. Watch out world, Winbirri is heading for the global arena.

“Tour and Tasting Experience Days” are available by appointment. During your tour you will be guided by head winemaker Lee, who will enthusiastically guide you through the vineyards and explain the history of Winbirri, the methods used to care for the vines and the reasons behind the choice of grapes we grow in England. At the end of the 2-3 hour tour you’ll be taken to the tasting room to discover the wonderful aroma and taste of Winbirri wines, along with a local platter of soft cheeses and cured meats.

Lee assures us that the Winbirri sparkling wines are far better in taste and quality than any French Champagne. Their sparkling wine is the one to watch!

Update: In May 2017, Winbirri Vineyards’ Bacchus 2015 was named best white wine in the world at the Decanter World Wine Awards 2017. Congratulations!

Louisa lives in rural Norfolk and has a passion for eating and writing about local food.