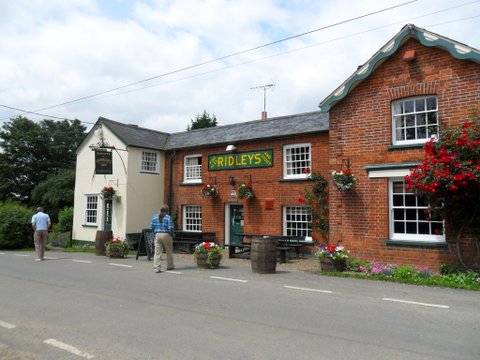 Go there now! The Compasses at Littley Green, Essex

The Compasses is known locally as the ‘Huffer pub’ after Essex speciality the Huffer – a triangular bap. Situated in the hamlet of Littley Green, between Chelmsford and Felsted, The Compasses used to be the brewery tap of the sadly defunct Ridleys Brewery, which was bought by Greene King back in 2005.

But thankfully that was not the end of the Ridley family’s association with brewing and pubs. Nelion Ridley brews great beer from his Bishops Nick brewery in nearby Braintree, and Joss Ridley is landlord at The Compasses.

It’s a true country pub: you’ll find a spaniel or two in the bar, log fires in winter, and a nice garden in the summer where the pub’s chickens rule the roost! You’re guaranteed a warm welcome, too.

There is always Essex ale available, generally from Joss’s brother Nelion, plus Adnams ales from neighbouring Suffolk, and regularly changing guest beers. But the pub’s Huffers are the real draw, stuffed with a variety of fillings such as ham and cheese, hot sausages and ABC (avocado, bacon and cream cheese). A Huffer burger is also available.

Traditionally the Huffer was a large loaf stuffed with whatever was available; it was the lunchtime staple of farmworkers and labourers. I’ve not seen them outside Essex and they’re generally not available in local bakeries either. Whilst the Huffers are popular at The Compasses, pub favourites such as beer-battered cod with hand-cut chips, homemade paté and red onion chutney, and daily specials are not to be missed.

The pub also has five bedrooms styled by Joss’s sister Alice. I’ve not sampled them yet, but there’s a beer festival coming up in the summer, so why not!?

The Compassess is a great pub and it’s fantastic to see it sticking to what it does best: great beer, great food and great atmosphere.

Ian Doughty is a passionate food lover from Essex and director of Turpin Smale Catering Consultants. To get in touch with Ian to recommend East Anglian venues or to share local food news, please email him here or Tweet him here.