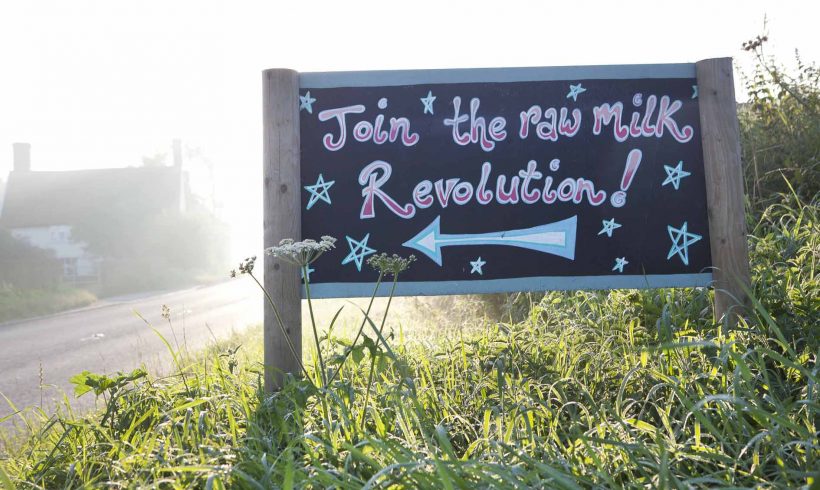 Why everyone should try raw milk

Just when you think there is nothing much new under the sun, you discover there is. Well, not new exactly, but you get my drift…

I grew up in rural Lincolnshire but unlike just about everyone who has contacted me since I announced my conversion, I don’t think I ever drank raw (unpasteurised) milk. I can recall an old fella that used to cycle to the dairy farm every morning with a small metal churn hanging from his handlebars – I now realise what he was up to.

Raw milk is not, of course, without controversy. It cannot be sold in shops or supermarkets but only at the “farm gate” directly to the consumer by the dairy that produces it. In many countries, including Scotland, it is illegal to sell it full stop. This fact makes me feel as if I have done something enormously risqué and gives me a slight thrill – I recognise this is a bit odd.

Raw milk contains a range of bacteria but an increasing number of people believe that the risks of drinking it are now sufficiently low (the farms that can sell raw milk are highly regulated) that the benefits outweigh them… and that the much better taste makes the miniscule risk of infection worth taking. Fans of raw milk also argue that it is healthier and better for you, pointing to the enzymes and nutrients it contains that would otherwise be killed off.

I am not, let me say, one of those evangelical types – I don’t hold with paleo diets and “clean food” fashions, although I do like fermented stuff (or pickled as we used to say). Each to their own, of course, but I fast run short of patience with these fashionable fads. I have no issue with pasteurisation, which has brought healthy milk to the masses with very little risk. I also know that dairy is itself controversial in that cow’s milk is designed for baby cows, not humans.

All that said, I was totally up for trying raw milk for the first time at a food fair at Clumber Park in north Nottinghamshire, courtesy of the Welbeck Estate (producer of the magnificent – and unpasteurised – Stichelton cheese). Welbeck Estate sells the raw milk from its own herds at farmers’ markets and food fairs (permitted under the law as an extension of the “farm gate” provision). If you should ever visit the estate, it even has a vending machine that dispenses raw milk.

So having purchased my Stichelton cheese, I ventured to try the raw milk. I had it in my head that it would be a harsher, more tart, more sour experience than the pasteurized variety. Not so… it tastes fresher, creamier (slightly yellow in colour) and very rich. In fact, it tastes wonderful. Like fresh cheeses, raw milk varies in flavour according to the time of year – spring grass will produce a different flavour from cows over-wintering and it changes from cow to cow and herd to herd.

I could happily drink this stuff by the glassful. It is great on cereals and in tea and now I am going to venture into recipes and yoghurt-making to see how the raw milk behaves differently. In a blind tasting, my daughter professed not to be able to tell the difference, but I put that down to an immature palate… I can tell the difference and I am converted.

Do you drink raw milk? Do you have any recipes that you think benefit from using raw milk compared with pasteurised? Please point me in their direction if so! I am such a rebel.