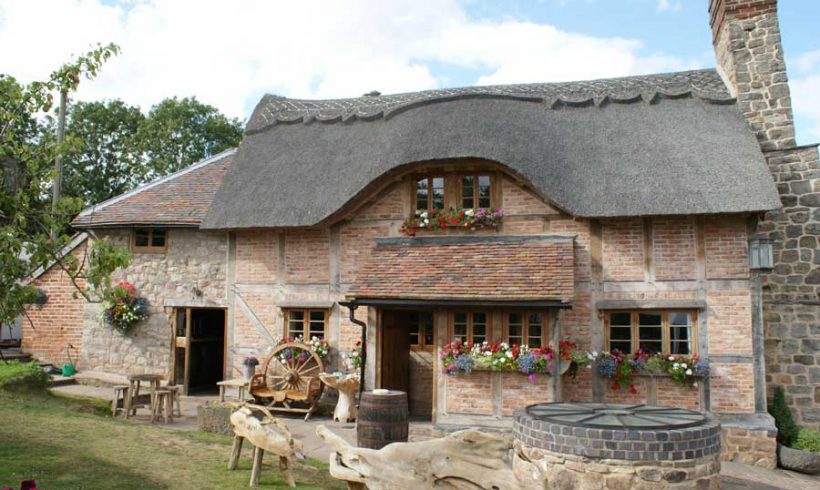 The evenings are getting lighter, the daffs are trying their best to emerge, the lambs are in the fields. One of the best things to do to celebrate the new season is to head to a brilliant country pub (but that’s true anytime actually!). Whether it’s Sunday lunch with friends and family, a country walk or a bike ride followed by a bite and a glass or two, or a midweek evening meal to break up the week, a trip to a characterful village hostelry is always worthwhile. Well-run rural pubs are special places and they definitely need and deserve our support. Here are ten we heartily recommend. 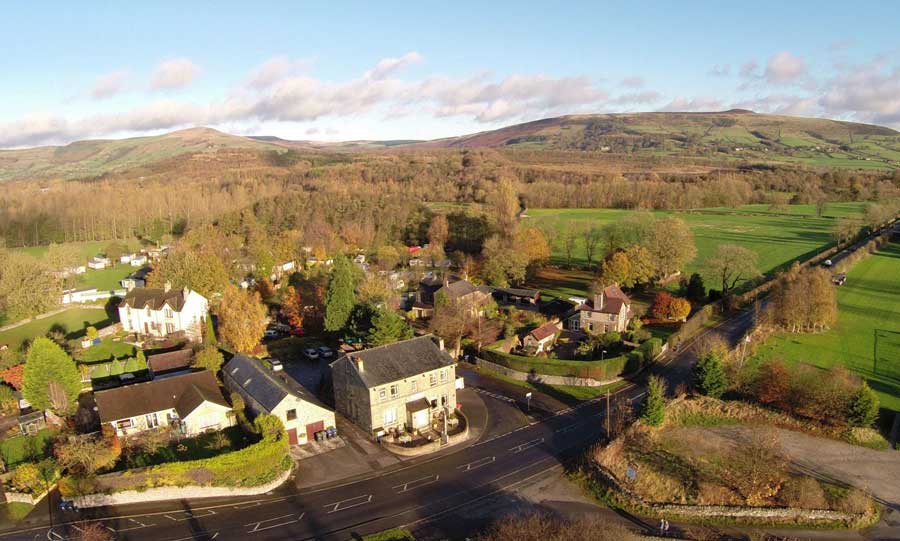 The Samuel Fox from above

We’ve eaten at The Samuel Fox (above is an aerial view) in the Derbyshire Peak District’s glorious Hope Valley on a few occasions, and have been blown away each time. The cooking of James Duckett (chef-patron since 2012) and his team is exceptional. James has worked under some big names including Marcus Wareing and Michel Roux Jnr – and it shows. This AA five-star inn has four rooms, making it a great base for food lovers who want to explore the Peaks. The Samuel Fox was also named Restaurant of the Year 2017 by local publication, Westside Magazine. 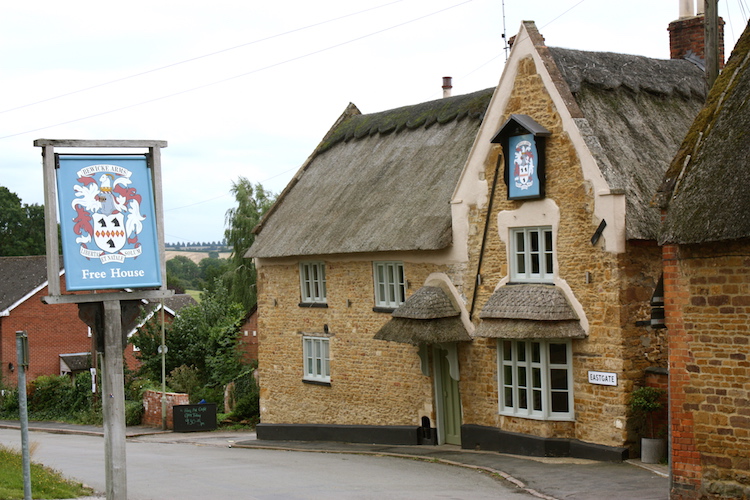 The Bewicke Arms in Hallaton is a delightful thatched village pub with its own cafe opposite. It was shortlisted in the GFC Awards 2017/18 and the setting is hard to beat: Hallaton is a stunning village and this pub is wonderfully cosy. It has been sympathetically rejuvenated and the dining areas are pretty and carefully designed. A great amount of thought and effort has clearly gone into the Bewicke, making it an idyllic village pub. The food – majoring on traditional pub classics with the occasional twist – is of a very good standard, too. 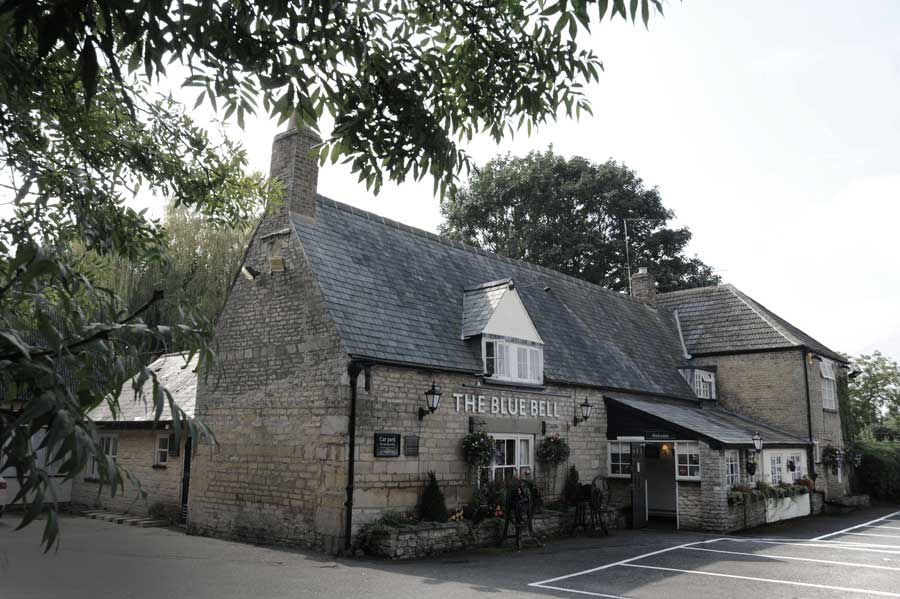 Situated in the Cambridgeshire village of Glinton, just north of Peterborough, The Blue Bell is a cosy village dining pub dating back to the 18th century. Michelin Guide-recommended and focusing on local and seasonal ingredients, head chef and owner Will Frankgate – a former Roux Scholarship finalist – and his team produce excellent classic and modern British dishes. The vibe is relaxed but the food is prepared and cooked to a high standard. Highly recommended. 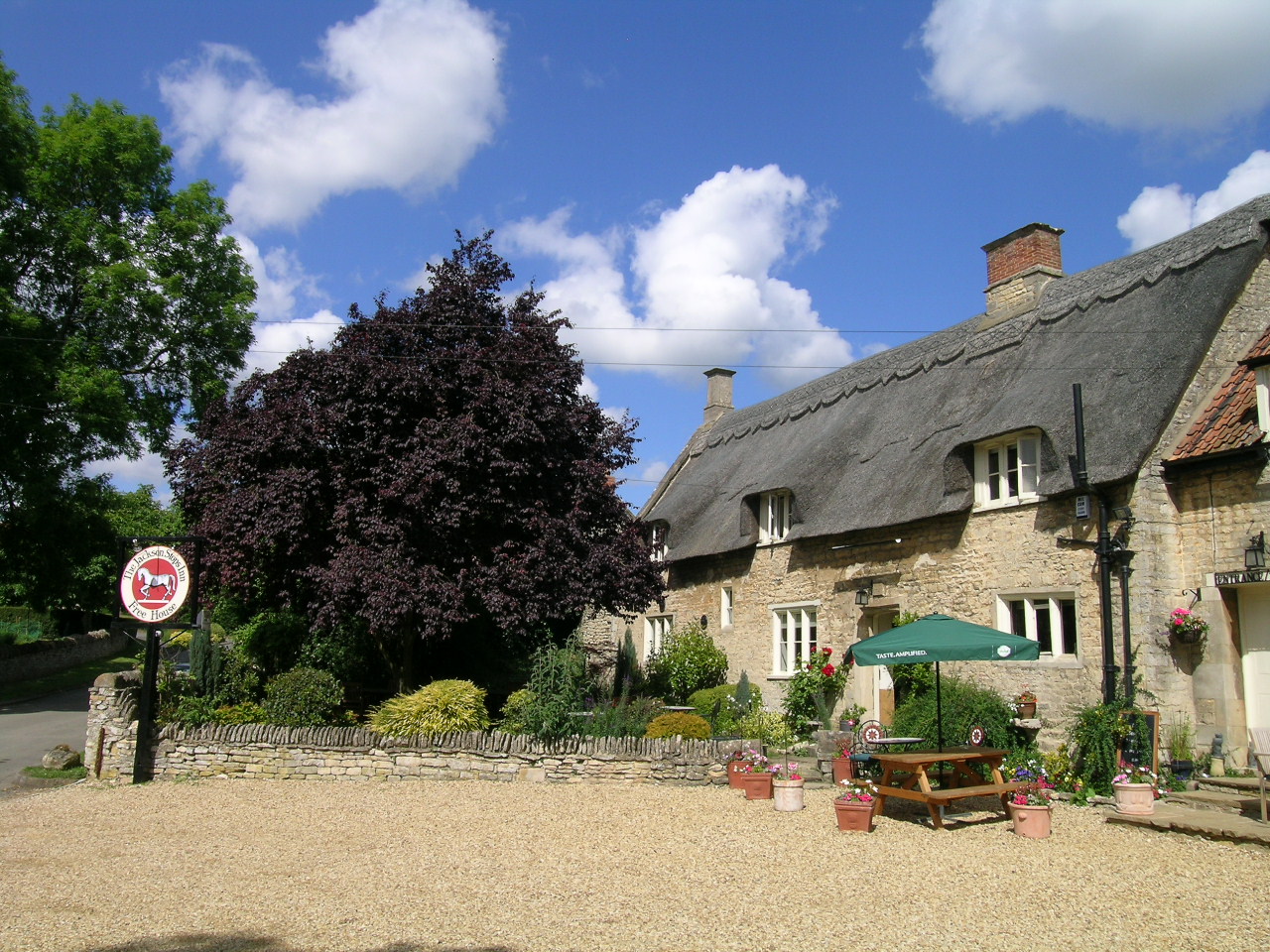 Set back from the road in the pretty Rutland village of Stretton stands the thatched Jackson Stops. Country hostelry through and through, this early 18th-century pub is recommended by the Michelin Guide 2018, having been awarded a Michelin Plate. The interior matches the idyllic exterior, with a traditional, unpretentious front bar serving local ales from the likes of The Grainstore Brewery and Oakham Ales. This is a beautiful and welcoming country pub serving excellent food. 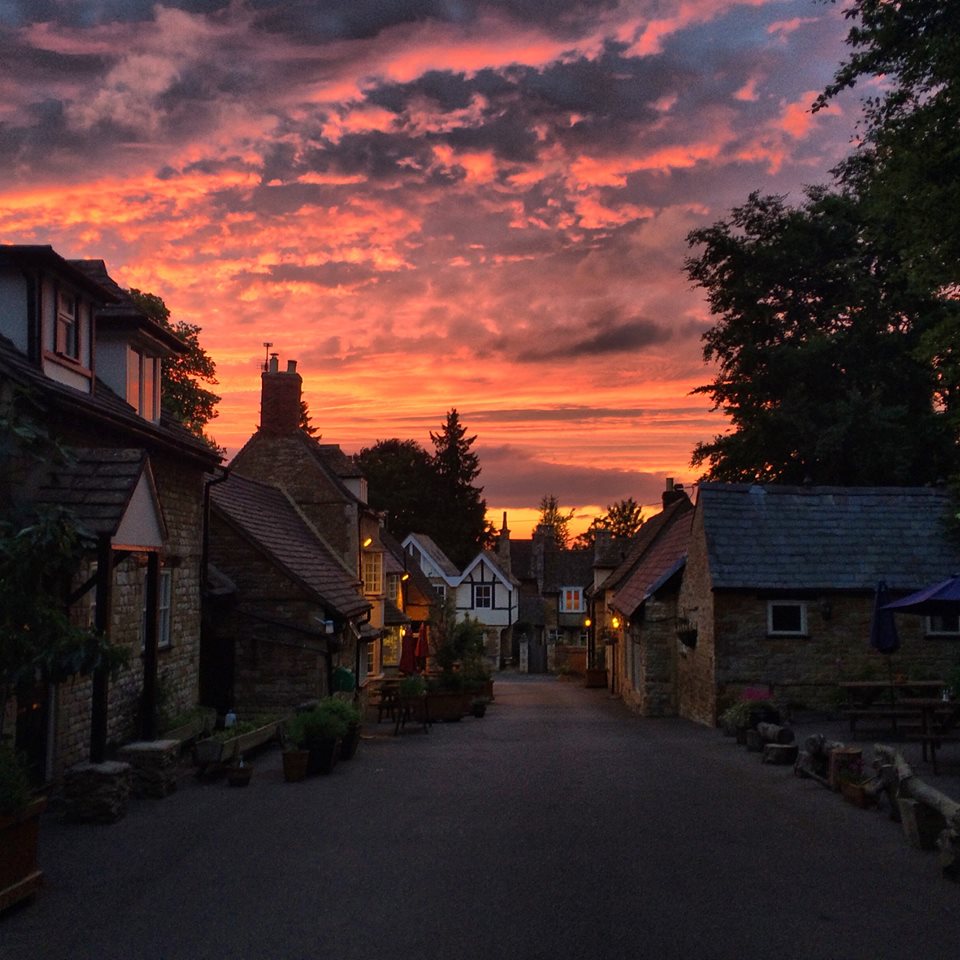 The King’s Arms at Wing

The rustic 17th-century King’s Arms in Wing, Rutland, is 100% committed to local sourcing and has its own smokehouse, run by head chef and co-owner James Goss. This inn – it has eight bedrooms – is inspired by Rutland’s beautiful countryside, and many of the team are keen foragers. It came as no surprise, then (to us at least), when The King’s Arms was named Midlands Pub Winner in the Countryside Alliance Rural Oscars last week, while also making the final in the inaugural Game to Eat ‘Game Champion Award’. A slice of rural heaven. 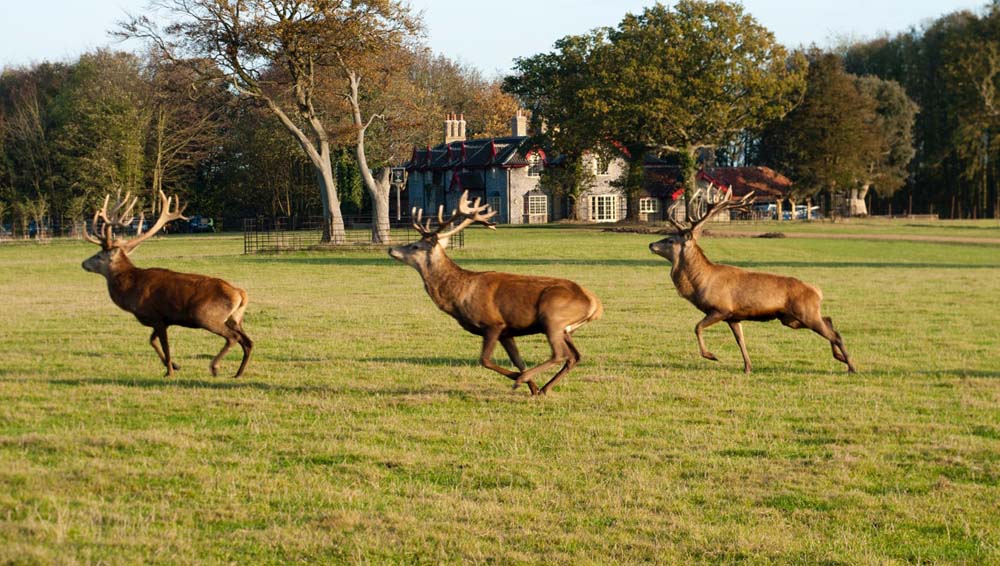 Formerly a country house hotel and shooting lodge where King Edward VII enjoyed liaisons with his mistress Lillie Langtry, The Gunton Arms was converted into a pub with 12 bedrooms in October 2011. The kitchen sources local ingredients and seasonal produce, enthusiastically cooking venison from the deer park, beef and pork over a large open fire in the Elk Room (look out for the huge antlers over the fireplace). The meat is served with the likes of goose-fat roast potatoes, Bramley apple, Béarnaise sauce and rowanberry jelly. Desserts are reassuringly indulgent: rice pudding with crab-apple jelly, Victoria plum and almond tart, or “a shot” of sloe gin jelly. A real Norfolk smasher! 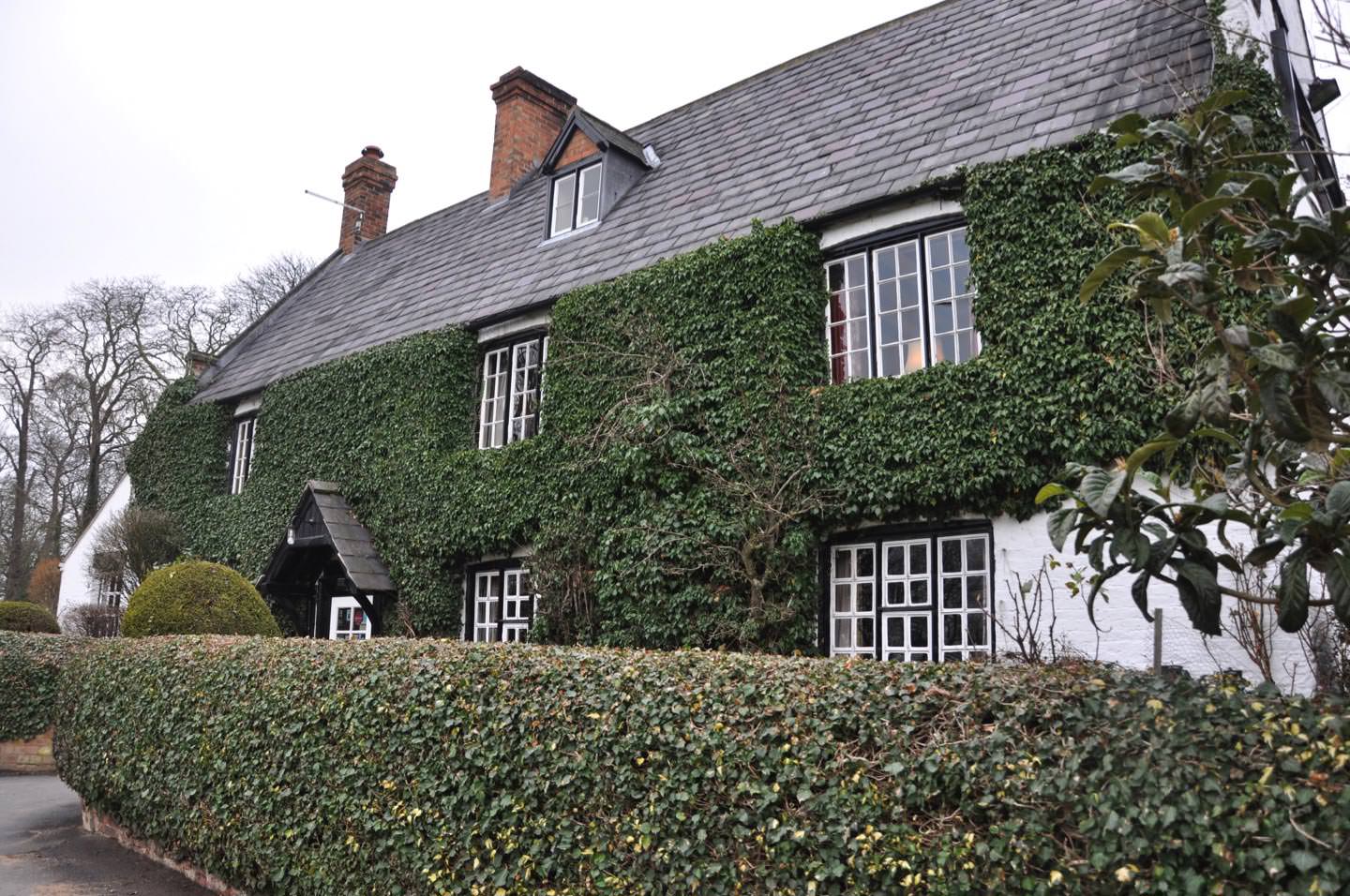 British village pubs don’t get much more classic-feeling than the Martin’s Arms, which has been named County Dining Pub of the Year in the Good Pub Guide 2014-18 inclusive. Hidden away just a few yards from Colston Bassett’s famous Stilton dairy, it’s a Grade II-listed enclave of comfort, good beer, and superb food. Once you enter the front door, you won’t want to leave. It’s a real gem – a haven of good taste and tranquility, offering top-quality food. 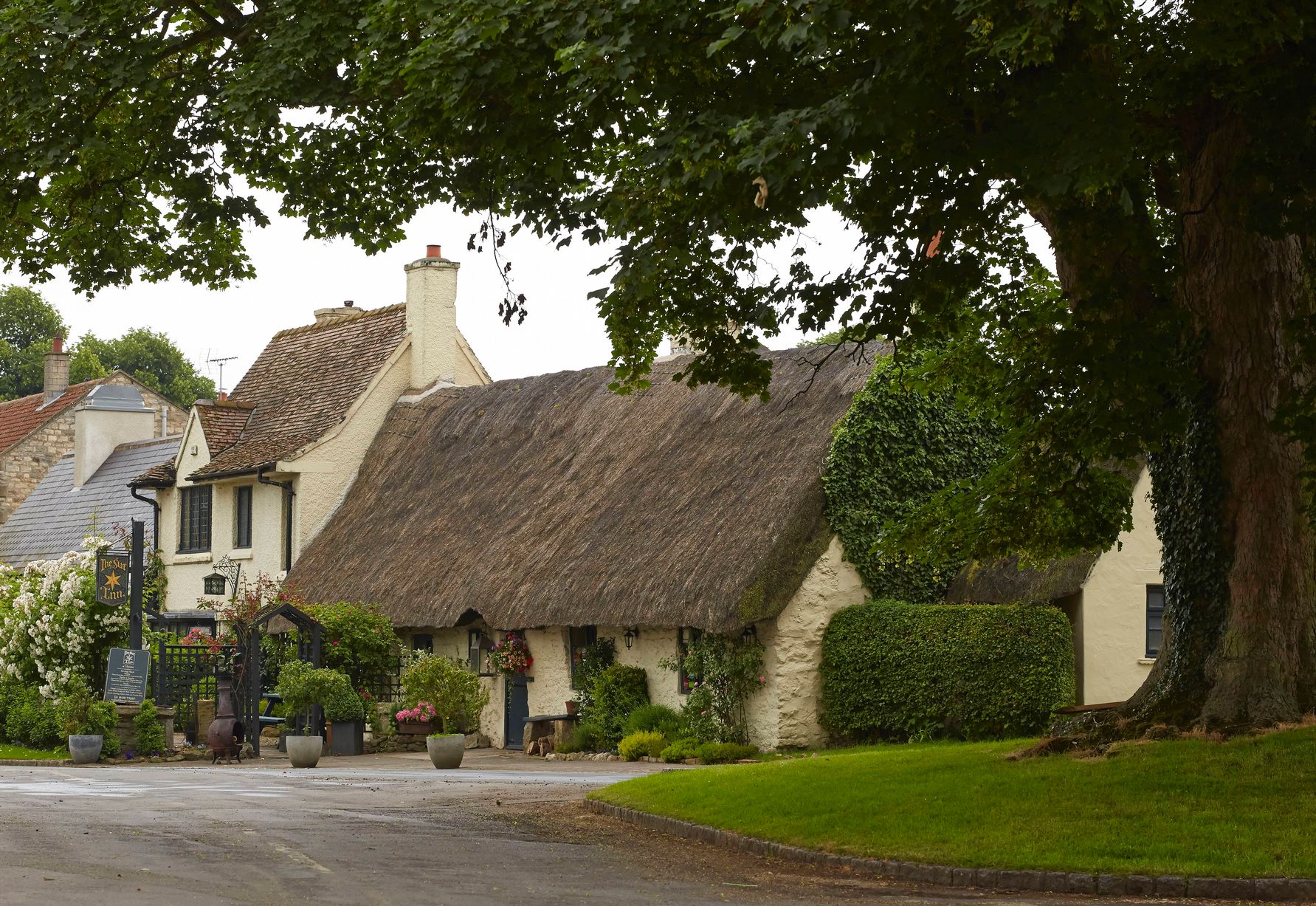 Best Restaurant with Rooms in the White Rose Awards; one Michelin Star; a place in the Top 50 Gastro Pubs list; 19th in the National Restaurant Awards… The Star Inn at Harome near Helmsley has plenty of gongs to its name, and rightly so. The thatched inn dates back to the 14th century and certainly looks the part, with its quaint village setting and snug vintage interior of low beams, wood panelling and rough plastered walls. Chef and owner Andrew Pern roots his seasonally changing menus firmly in North Yorkshire where he grew up. The Star Inn deserves its many accolades – it’s a gleaming jewel in Yorkshire’s dining crown.

The Inn at Freshford, near Bath 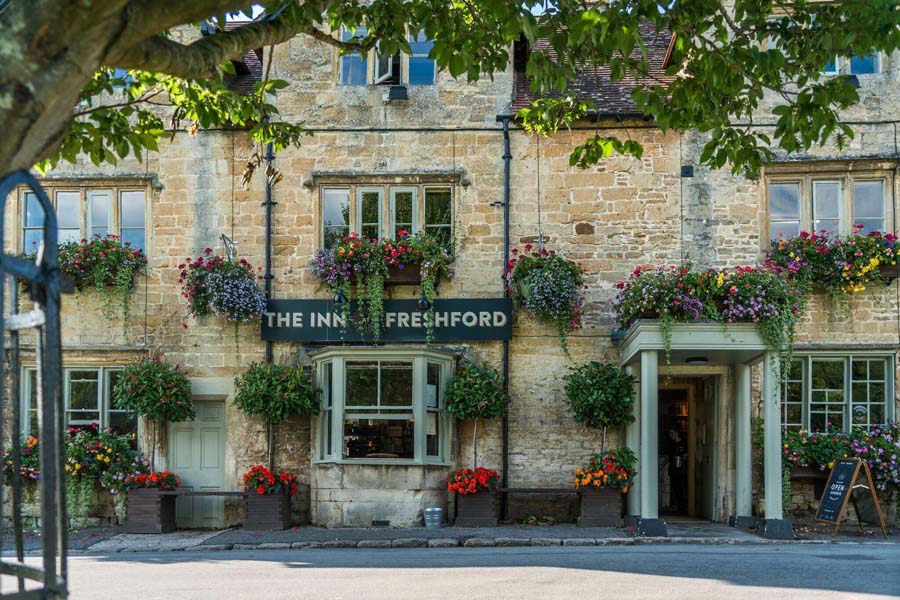 The Inn at Freshford sits five miles from Bath, near the water meadows of the River Avon. It is a long, stone building with wooden benches overlooking fields and a decent-sized outdoor seating area. It offers a good range of specials and a small-plates, tapas-style – the likes of meatballs in roast tomato sauce, salt & pepper squid and roast mushrooms with Wyfe of Bath cheese. This is a fine pub in a delightful village and also the starting point of a great 3.5-mile circular walk – The Two Valleys Walk – taking in The Cross Guns at Avoncliff – more here. 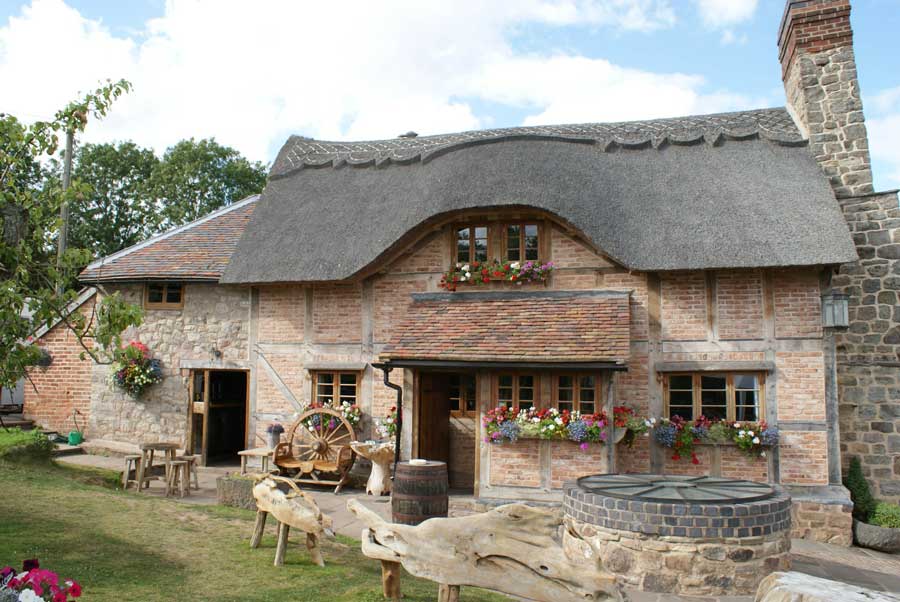 The Live & Let Live is a friendly, family-run Herefordshire freehouse that oozes history and character. Exposed timbers, flagstone floors, a fine fireplace and a delightfully tranquil location combine to create wonderful surroundings in which to enjoy honest traditional pub fare alongside local ciders and ales, such as Wye Valley Brewery’s Butty Bach. The menu offers good, wholesome pub food, with something for everybody, with many ingredients coming from local suppliers.

Every pub featured in this post is part of GFC’s recommended network. They are recommended on merit – you cannot pay to be recommended by GFC. However, this is a promoted feature and therefore contains advertisements.