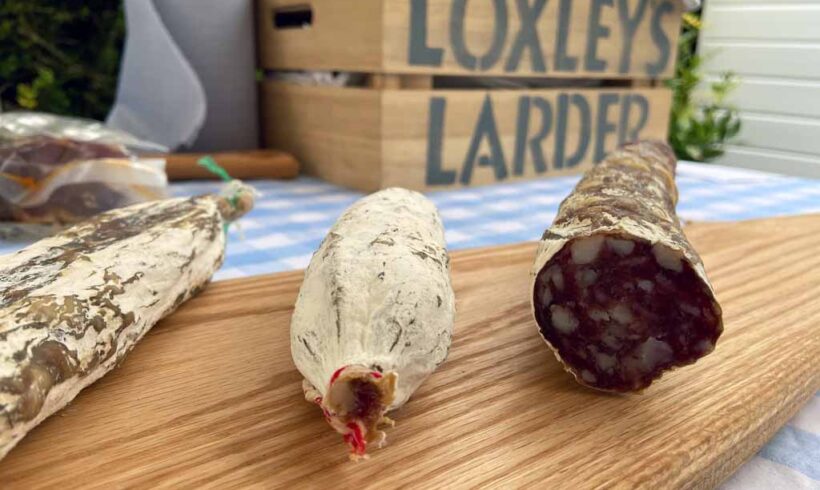 Why British charcuterie was once an everyday food

People think we have no tradition of making charcuterie in Britain, but in reality, it was once commonplace. Just about every rural household kept a pig, which represented a lot of meat when it was slaughtered. With no refrigeration or way of keeping meat fresh for more than a couple of weeks, preserving was vital for any rural family who didn’t want to starve over the winter. This meant salting the meat to create bacon and ham as we know them today. However, salting would still only keep the meat edible for a few extra weeks – more was needed to keep farmers going.

“Hams were huge, salted things that would be hung from the kitchen ceiling, and pieces would be cut off and cooked as needed.”

Hams were huge, salted things that would be hung from the kitchen ceiling, and pieces would be cut off and cooked as needed. As time went by, the meat would become drier and drier and it is reasonable to assume the household would discover that thin slivers shaved off this dried ham were super tasty. They would also have discovered that adding extra salt to sausages would prevent them from spoiling and in due course, they produced the equivalent of salami.

Furthermore, we know that the Romans had a version of salami and air-dried hams. It is inconceivable that in the 367 years they occupied England, that knowledge did not get passed on. Also, salt pork and beef was an important part of the sailors’ diet in Nelson’s navy – they fed them at sea for many months. This seafarers’ grub was probably not of the greatest quality but it was charcuterie nevertheless.

“Many rural traditions were lost in the UK, one being the art of charcuterie making.”

So what happened? Why did this tradition of charcuterie-making disappear? The industrial revolution came about very quickly and people moved in large numbers from the countryside into towns to work at the factories. A consequence is that the many rural traditions were lost in the UK, one being the art of charcuterie making.

In recent years this tradition has been revived by small charcuterie producers around the country. British Charcuterie Live has been created to promote British charcuterie through training and annual awards and make it as good as any in the world.

My business Loxley’s Larder is at the vanguard of this group of charcuterie producers. We are producing our own interpretation of continental charcuterie using high-quality outdoor-reared pork, beef and wild venison.

To find out more and book yourself onto one of Martin’s new charcuterie-making courses, click here.