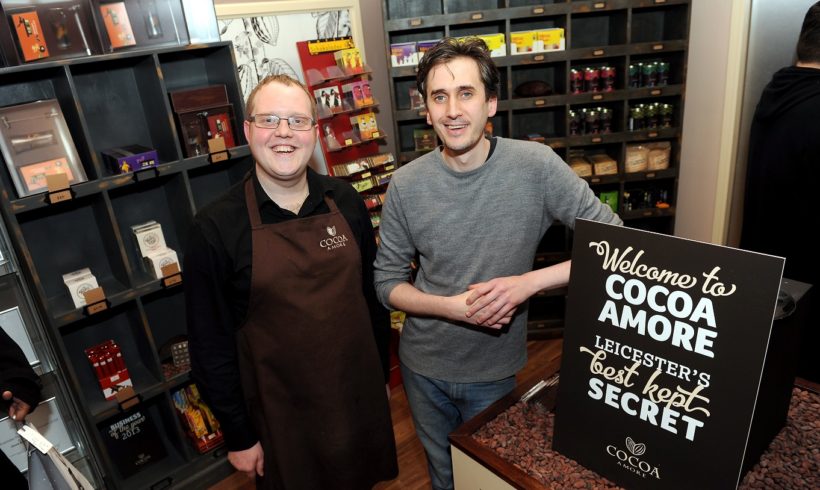 Great news for chocolate and gin lovers in Leicestershire

Cocoa Amore, the chocolate maker voted Leicester’s independent business of the year in 2014, has moved to smart new premises in Silver Street.

After nearly two year’s in the revamped Silver Arcade, the store has moved to a larger space at street level, forming part of a growing cluster of high quality independent businesses around St Martin’s Square.

Speaking after a launch party, owner and chocolatier Pete Gardener said: “We’ve had a successful couple of years and it was great to receive such wonderful comments after the opening of our new shop. I’m very happy with the new store, particularly our workshop space, which is busier than ever. We hope to see the shop go from strength to strength over the coming year and see our plans for further expansion come to fruition.”

The new shop combines retailing of Cocoa Amore’s extensive range of handmade chocolates, with the chance to taste-match chocolate with wines and spirits. Savoury treats featuring chocolate will also be available, such as smoked duck breast on cocoa rye bread with cocoa nib butter.

Upstairs are the production facilities as well as space for workshops where chocolate enthusiasts can learn about cocoa growing and production around the world and design and make their own chocolates. The company is launching a crowdfunding campaign to further expand its activities and bring two remaining floors of its new premises into use.

Last year, Cocoa Amore was one of ten retailers to be invited to Downing Street to take part in the Chancellor’s Christmas Market.

Burleighs Gin, distilled in Charnwood with 11 botanicals including silver birch, dandelion, burdock and elderberries, is entering a new phase of expansion.

Having moved its offices into the centre of Leicester, the distiller of Burleighs Gin – called 45 West – has opened a specialist gin bar on the edge of St Martin’s and has toured the region to promote the Burleighs brand in tastings at a number of independent outlets.

The new Leicester bar, in the former premises of the Cymbiosis hi-fi outlet on Hotel Street, opened a few weeks ago. It is designed to bring the company “closer to its customers” and will also highlight a range of other premium spirits, beers and craft beers.

Distiller Jamie Baxter said: “I can perch at the end of the bar and see people drinking the gin and we can get first-hand feedback from our customers. It’s going to be fantastic!”

There was recognition for two Great Food Club-recommended restaurants in the Leicestershire Excellence in Tourism Awards in November. Gold Award winner in the Taste of England category was the White Peacock on New Walk in the City Centre (15 per cent off the a la carte menu with your GFC card Mon-Fri), while highly commended was 34 Windsor Street in Burbage (10 per cent off a la carte in the evenings).

The White Peacock, along with Gold Award winners in other categories, will now be re-judged for the national VisitEngland Awards for Excellence 2016.