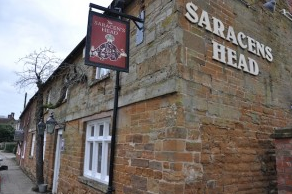 Left: The Saracen’s Head and its distinctive pear tree

We love a good country pub here at Great Food Club. Out of the entire food and drink sector, rural inns are probably our favourite places. Usually steeped in history with walls that could tell a hundred stories, they are a shelter from the stormy blast, a British institution, and often serve good beer and food too. 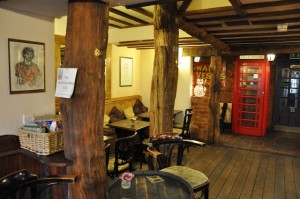 The phone box, installed by the previous landlord, wasn’t easy to put in

I paid the pub a visit just before Christmas and was impressed by the welcoming, relaxed atmosphere, and by the way the pub is making a big effort to be the hub of the local community – and succeeding: the function room hosts local debating society events, yoga and more (including weddings). Meanwhile, paintings by a local art group adorn the pub’s walls. 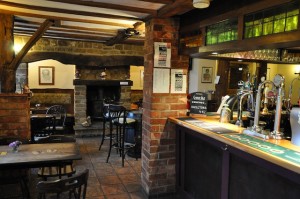 I didn’t have time to try the food, but reports (and the awards, of course) suggest it is very good pub grub. The menu certainly looks impressive, highlighting a selection of locally sourced ingredients such as Long Buckby rump steak, game from nearby village Flore, and fruit and veg from the pub’s own orchard and kitchen garden. Adding a few more draught ales to the bar would improve matters further. 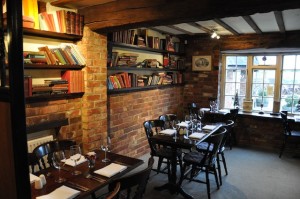 The dining room, known as the ‘library’

The Saracen’s Head is run by Duncan and Sarah Evans and their extended family, and they have created a superb atmosphere. Duncan used to work in IT before deciding to go in to the pub trade but you’d think he’d been doing it all his life. 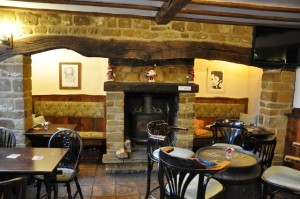 One more thing: when you don’t hear about The Saracen’s Head in the next Carlsberg Northants Food and Drink Awards, do not assume the pub has gone downhill. The competition rules do not allow the previous year’s winners to enter.