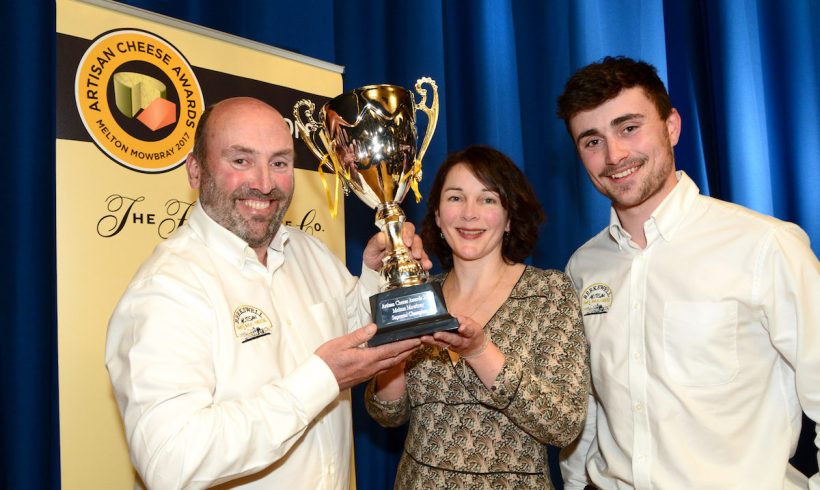 A sheep’s cheese – Berkswell – won the Supreme Champion prize at the recent Artisan Cheese Awards held in Melton Mowbray. The winning cheese, produced by the Fletcher family of Ram Hall Farm in Coventry, beat more than 500 entries from 115 producers. The award comes with a silver cup and a £1,000 cheque from sponsor, The Fine Cheese Co.

Ann-Marie Dyas, co-founder of The Fine Cheese Co. said: “We’ve been selling Berkswell for around 30 years – almost as long as the Fletchers have been making it. It’s a testament to their commitment to quality and raw-milk cheese that they continue to win prestigious awards like this.”

Berkswell won not only the Supreme Champion Award but also the Best Farmhouse Cheese class sponsored by Harvey & Brockless and ‘Best English Cheese’ sponsored by the NFU. Stephen Fletcher of Ram Hall Dairy said: “’We are so proud. It’s a credit to our great team of cheesemakers and also recognition for the quality of sheep’s milk cheese.”

Matthew O’Callaghan, organiser of the awards, noted that sheep’s milk cheese is becoming more popular in Britain. He said that in the Middle Ages, Britain’s main export was wool from millions of sheep reared across the country, particularly in the large monastic settlements found in Yorkshire and elsewhere. Sheep’s cheese was much more common in those days, with cheeses such as Wensleydale originating as a sheep’s milk cheese. The dissolution of the monasteries and the Enclosure Acts led to a decline in the number of sheep and the rise in cattle and cow’s milk cheeses. Recently more British producers have started to make sheep’s cheeses and the response by the public has been encouraging.

A total of 24 prizes were handed out at the awards. Over £10,000 was raised in sponsorship as prize money given directly to the winning cheesemakers.

The judges awarded Golds, 55 Silvers and 52 Bronzes. Of the 115 cheesemakers who entered, 16 were from Ireland, nine from Scotland and seven from Wales. The rest were from England.