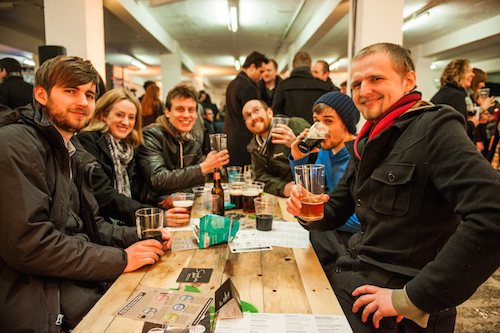 Has any building anywhere ever contained a more creative range of beers than the Old Truman Brewery during Craft Beer Rising London 2015 (February 19-22)? It seems unlikely. From chocolate lagers to Bramley apples saisons, from honeyed brown ales to black pepper beers, the place is full of brews to delight and confuse, to raise eyebrows and, occasionally, screw up faces. The festival provides irrefutable evidence that the brewing industry in 2015 is the most dynamic and exciting part of the entire food- and drink sector.

And what a fantastic party all that exciting beer creates, supported by Craft Beer Rising’s carefully chosen DJ line-up and lip-smacking street food. Although clearly it’s less party and more bottom line for the brewers, who are competing in a crowded and fickle marketplace. This market is changing fast, driven by customers who demand variety, but I increasingly get the feeling that the brewers who will thrive in the long run – the distant future – are the ones who put quality rather than pure creativity at the heart of their businesses. 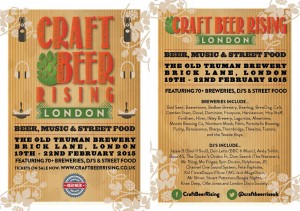 My find of the festival this year was Black Isle Brewing Co from northern Scotland’s Black Isle, near Inverness. I’d heard of this brewery before – they’ve been around since 1998 – but the quality of its beers really hit home to me yesterday. The brews tasted incredibly clean, impressively well balanced and packed with flavour, with my personal highlight being the Hibernator Oatmeal Stout (7% ABV yet dangerously quaffable). After chatting to them it’s easy to see the reasons why – quality of ingredients and ethos. Brothers Mike and David Gladwin brew with fresh water extracted from their own well, 300 meters below the earth’s surface. They are also committed to using organic malt and barley, so much so that they even grow their own barley on farmland surrounding the brewery. A brewery producing its own organic barley is, as far as I know, unique.

Other highlights of CBR 2015 were The Celt Experience’s ‘Oak’ from its Ogham range – wonderfully complex and full of complementary, vibrant flavours – and Hiver’s new honeyed brown ale, which is sweet but not cloying, deeply flavoured and luxurious.

Special mention too for the New Zealand Craft Beer Collective, a group of five Kiwi brewers who have pooled resources to try to gain a foothold in the UK market. Their stand, as well as offering a sublime range of beers (you simply have to try Renaissance’s Stonecutter Scotch Ale), is party central! These guys make great beer and are determined to have a good time while doing it.

Finally, thanks to Sharps Brewery for its intriguing beer and food matching session at its ‘secret bar’, which was so secret we only just managed to find it. Some of the flavour combinations chosen by Nathan Outlaw’s kitchen team – particularly Chalky’s Bite with smoked mackerel – were delightful.

Note 1: I barely scratched the surface of the festival.
Note 2: I produce and edit Craft Beer Rising’s magazine so have to declare an interest in the event.