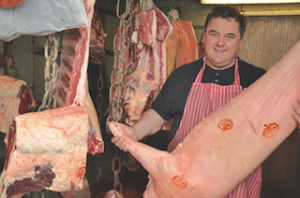 Johnny Pusztai can justifiably claim to be Britain’s best butcher.

The larger-than-life Nottingham meat magician won Observer Food Monthly’s prestigious Producer of the Year award in 2011, and receives huge acclaim from those he supplies. Nottingham’s double Michelin star winner Sat Bains is a big fan, as is one of the city’s most famous sons, fashion designer Sir Paul Smith, who hires Johnny to barbie at his summer ball.

So what is it about this Hungarian immigrant’s son that makes him such a superb butcher? Great Food visited his Sherwood shop – which sits unassumingly  between Bargain Booze and a Polish restaurant – to find out. 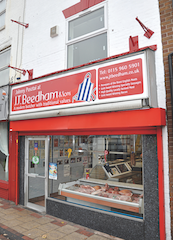 Johnny learnt his trade under George Beedham, an ex-army major and a “bull of a man who demanded respect”. Johnny stayed at Beedham’s and took on the business in 1991. “I left briefly to work on the boning line at a slaughter house to get the money to buy the shop, but I knew that I wanted to take on the business.” Rather than change the name, which was well known in the local community, Johnny added the prefix, “Johnny Pusztai at…” 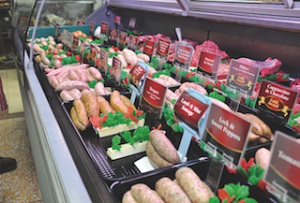 Throughout the conversation, Johnny’s passion for butchery and his respect for the trade – and the man who built up the business – shines through. “George Beedham is the man who made this shop what it is,” he says modestly, “I’m lucky to have been given the chance to take it on.”

But Johnny could have gone into many trades – his dad was a steel worker who came to England after the Hungarian Uprising of 1956 – so why butchery?

“I think I was drawn to food because of my heritage,” he says. “My dad’s Hungarian mates used to come round to our house. They’d buy their pork and make sausages together out in the yard. They’d have vests on, be hammered on wine, and be smoking fags, but I tell you, they’d make the most amazing sausages, not to mention goulash and pörkölt. My mates thought is was absolutely amazing.” 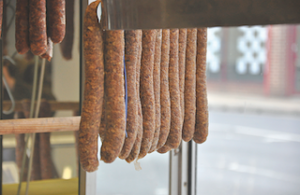 As Johnny talks, another Nottingham legend springs to mind: Brian Clough. Maybe it’s the accent, maybe it’s the passion for his profession and his straight-talking. “It’s a good job I own this business ‘cos I’m unemployable these days,” he says. “Do I look like I’d wear a suit, duck?”

Johnny currently buys his meat from two farmers – Roger Jackson at Hoveringham, 11 miles away, who supplies beef and lamb; and Andrew Baugh based 18 miles away at Wellow, who supplies pork. “You need a rapport with your suppliers,” says Johnny. “I have to be able to phone up and say I need two pigs tomorrow. Not want. Need. Sat [Bains] will call at weird times and I have to come up with the goods. I’m 24-7. Have to be. My wife puts up with a lot.” 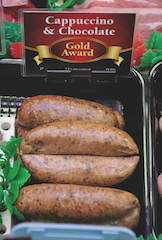 Sounds wrong, but it works!

The secret of Johnny’s success? He’s one of the most passionate butchers you’ll meet and also one of the hardest working. 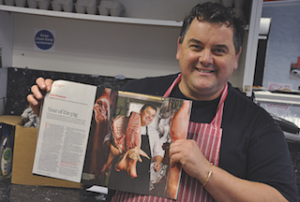 Johnny Pusztai is a member of Great Food Club