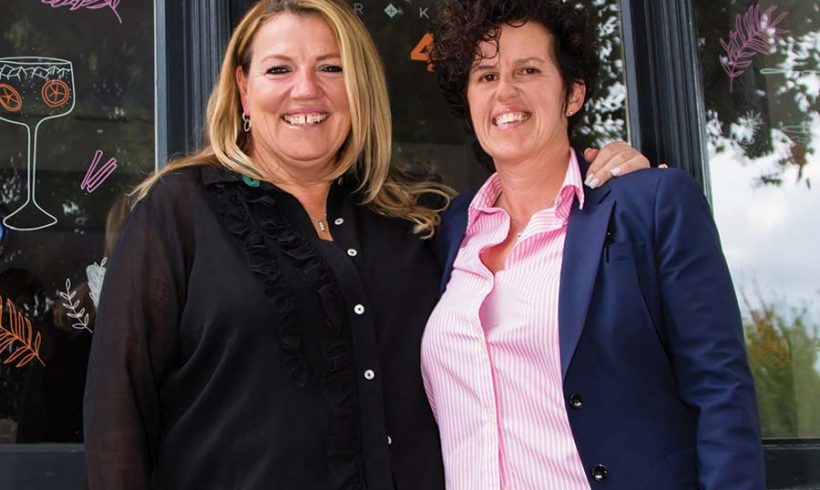 A new brand of craft gin, created by two female entrepreneurs from Leicester, is to launch exclusively in Selfridges Birmingham. And it’s all down to a chance remark made at a women’s business event.

Sally Davis, who is behind Leicester-based North42 brand, told a Birmingham audience at the launch of Back Her Business, a Treasury-led inquiry into the barriers facing women entrepreneurs, that she wanted Selfridges to stock her gin.

Sam Watts, Selfridges Birmingham general manager, was in the audience and was so compelled by the story of North42 that she told them she was keen to support them.

“It was surreal,” says Sally, who created the rhubarb and blood orange gin with her partner, chef Joanna Betts, to complement the gins they sell in their restaurant, North Bar and Kitchen, in the trendy West End area of Leicester.

“At that time, we had a concept of the blend, a name and design for the bottle. We felt our restaurant experience had equipped us to make a superb-tasting gin. So, to get it stocked in one of our favourite stores has been a dream come true.”

Sally and Joanna were invited to the launch of the Alison Rose Review of Female Entrepreneurship after successfully crowdfunding two months earlier to get sufficient backing to create their gin, which was inspired by their restaurant’s best-selling cocktail, the Rhubarb Tumble.

After the business event, they went on to finalise the perfect blend with a local distillery, eventually taking delivery of their first 1,000 bottles in May.

Joanna and Sally have just launched North42 gin in Selfridges Birmingham. This will be followed by pop-up shops in the flagship London store and Manchester, as well as online.

“We’re so excited that our premium gin will be in such a prestige store,” said Sally. “We crafted the gin to be perfect on its own, in a cocktail or with tonic water. We’re looking forward to introducing it to new customers over the next few months, showcasing how it can be enjoyed.”

Sam Watts, general manager of Selfridges Birmingham, said: “Sally and Joanna were so passionate about their gin that I was keen to bring it into the store. Our customers love an exclusive, premium product and they also love a good story behind it. The fact that we’re supporting female entrepreneurs from the Midlands is also fantastic.”