Life after the Yellow Brick Road

Lyddington in Rutland is one of those perfect villages. Tucked well away from the main roads, it sits there quietly looking gorgeous.

Who would have thought that behind the walls of one of its two pubs lies a story quite as dramatic as Brian Baker’s? From humble beginnings, the local lad’s journey has involved becoming the youngest ever chef to receive a Michelin star, swanning around the Mediterranean cooking for A-list celebrities, helping to invent the gastropub, catering for parties of 12,000 and eventually returning home to provide classic modern British comfort food as chef patron of the Marquess of Exeter. 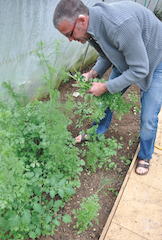 It all started in Uppingham in the late 70s, washing up at the Lake Isle Hotel and helping out at Culpin’s butchers (both still exist). By 16 he knew what he wanted, sat down with the Good Food Guide and wrote 20 letters. He nearly ended up at Raymond Blanc’s in Oxford, but eventually stayed local and joined Tim Hart’s Hambleton Hall. Armed with a CSE in home economics, he started as a commis to Michelin-starred Nick Gill (brother of critic A.A.).

“After 18 months I was told I was being groomed to be head  chef – I was told I was ‘a natural’,” he says. “When Nick left in 1984 I took over, aged 21, and retained the star.  Of course at that age I had no man management skills whatsoever and there was a lot of pressure. Tim Hart was very good at protecting me, maybe too much on a personal level because after 10 years at Hambleton, I’d really had very little exposure to the outside world.” 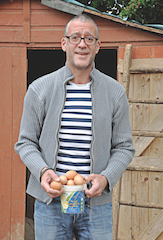 He needed to move on, and with the next job he was catapulted into a world of private jets and supermodels as private chef to the Italian fashion designer Valentino.

“He was charming, loved his food and had strong views about it – risottos were to be stirred for 22 minutes exactly.” On any one day Baker would find himself in Rome, Gstaad, Capri or St Tropez, cooking lunch in the office and maybe a private dinner for 12 in the evening. “There was an open budget, so  shopping was amazing. It was a case of ‘Naomi and Elle are popping round’, so I’d go out and get the biggest lobsters available.”

Food would be presented on huge platters so the fashionistas could pick precisely what they wanted – a  sharing ethos Baker has carried forward with him ever since.

Even this kind of life begins to pall, though. “It was exciting, but ultimately you exist under the shadow of someone else.  You have all the trimmings, but it’s not really your life.”

After a short spell back in the UK, he returned to the Mediterranean, this time cheffing on a 200ft yacht based in Antibes, the weekend retreat of a Mexican billionaire and his glamorous wife. They would operate on Mexican time so dinner would be required at 3am, but in between weekends and the occasional trip to Seville or Tangiers, Brian could relax on deck, top up his tan and watch frolicking dolphins.

Greater challenges were required and he returned to the UK to head up the busy Criterion in Piccadilly, serving 600 diners a night with high quality brasserie food. He would also assist in opening the Abingdon, a venue that helped pioneer the gastropub concept. It was hugely successful but when Capital Radio took over, thinking they knew how to make money from catering, he got out. 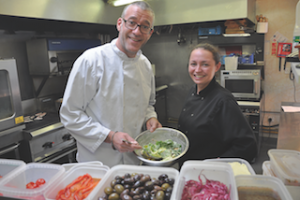 As it happened, a friend knew that one Elton John was in the market for a personal chef. Baker’s credentials checked out and he was off again to Nice. “It was hugely interesting. Elton was not a foodie like Valentino but there were plenty of parties and you can imagine the guest list when it got to events like Cannes.  I’d be in the kitchen and Elton would come round to introduce Sigourney Weaver or Sharon Stone.”

Baker speaks affectionately and protectively about Sir Elton, but after two years it was back to London and another change of direction with a massive corporate events company. He found himself running the annual ball for 12,000 Vodafone staff. “It was as different from personal cheffing as you can imagine. We’d create a small town in a matter of weeks, with 200 chefs in five kitchens.

“I suppose I was swinging between extremes but I’m pleased and proud to have fed that number of people and done it with style.”

Eventually, the prospect of his own dining pub back in Rutland started to appeal. He made it a reality with the cosy Fox and Hounds in Knossington: “It was a great pub, with a great clientele and it worked well, though there was no potential to develop it.”

But a little later the Marquess of Exeter became available and it fitted the bill perfectly. “Two and a half years on and I think we’ve done a great job in a tough climate. The philosophy centres around great food, great service, in comfortable surroundings – it ain’t rocket science.” 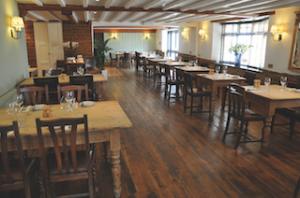 Dining room at the Marquess of Exeter

The Marquess has 17 newly refurbished bedrooms and does a tidy trade from Rutland’s booming tourism business. The restaurant, with its natural woods, earthy tones and menu of brilliantly executed classics remains the key to the business.

A hallmark of Baker’s approach is conviviality. He is well known for his sharing plates of ribs of beef and joints of lamb presented at table on a board with a carving knife. “It’s amazing how many people go out to eat and sit there not talking. I want people to interact – with these dishes you have to cut it up, share, talk about the food – it just helps get people communicating.

“It’s food from the heart,” concludes Baker. “It’s the staples like chicken liver parfait, rib of beef and crème brûlée that benchmark the restaurant. I’m not trying to be Heston Blumenthal, but I do say come and have a crème brûlée and it could be the best example you’ve ever eaten.” 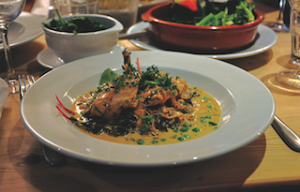 The Marquess of Exeter 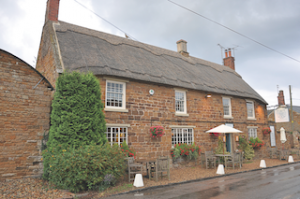 A beautiful 17th century thatched building in idyllic Lyddington near Uppingham, the Marquess is part country pub, part hotel, part restaurant.  It combines a rustic ambience with luxurious feel. The Marquess now has its own herb garden, laying hens and produces preserves.