Map of every brewery in the Midlands 2012 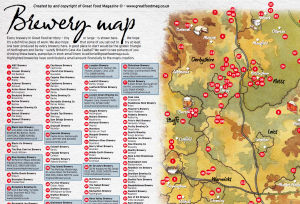 This brewery map is a collaboration between Great Food Magazine and Steve Westby, chairman of Nottingham CAMRA.

It took several days to create and we hope that it’s a definitive piece of work.

We think it’s brilliant that there’s such a huge number of breweries in the region, and are stunned by the ‘golden triangle’ of ale that can be seen on the map around Nottingham and Derby – surely this area is Britain’s Brewing Capital in terms of number of breweries per square mile?

Yorkshire would appear to be the UK’s number one real ale county – it has around 128 micro-breweries over the four ridings, according to Steve Westby.

Click here to find out how to win a subscription by sending us pictures of local beers.