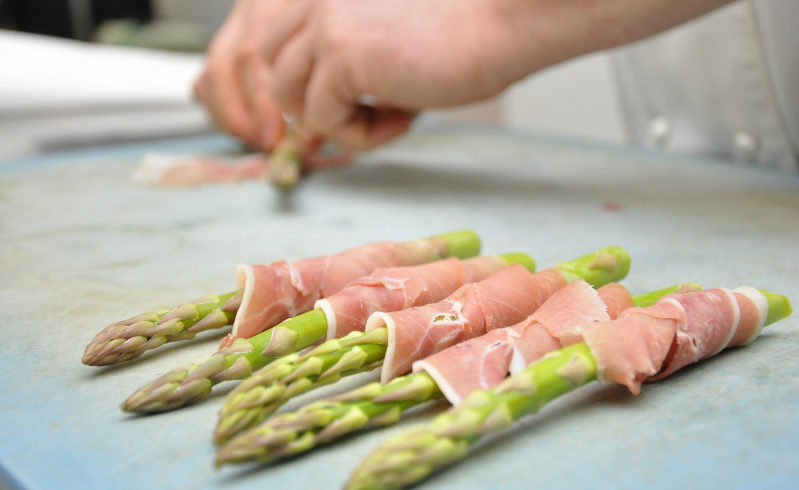 Summer at a Rutland pub: local asparagus, strawberries and cider

From the end of May, in a good year we serve up kilos of asparagus, one of my seasonal favourites. Cultivated in England since the 16th century when it was more commonly known as ‘sparrow grass’, it has become a firm favourite. 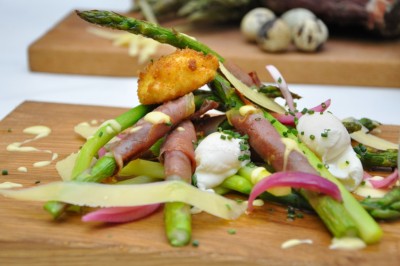 One of James’s asparagus creations

The end of the wild garlic season is signalled by blossoming white flower heads and tiny black seeds, which is when we stop collecting the leaves to allow the plants to work their magic and ready themselves for another year. That’s when we turn our attention to asparagus. Luckily we are able to source ours from just a few miles up the road in Manton, but as demand increases we look further afield towards Oundle in Northamptonshire or Heckington, Lincs.

Years spent in the Swiss Alps has given me a love for this treasured vegetable, although over there we used white asparagus. The specials door is where you will find the King’s Arms’ seasonal asparagus offerings – butter-poached and topped with the likes of garlic-seared tiger prawns, calve’s liver, lamb sweetbreads or just plain with hollandaise. Rich, creamy asparagus soup and sourdough bread hot from the oven has also been popular.

Also from Manton, English strawberries have now made it into the kitchen, partnering fresh cream and homemade double vanilla ice cream. Now the season is in full swing we’re starting to play with this local treasure: the sweeter varieties have hit their peak, and strawberry parfaits, mousses and jellies are flying out the kitchen. Not until later in the season when they start to go over will we then think about juicing them, making ice creams and vodkas or breakfast preserves. 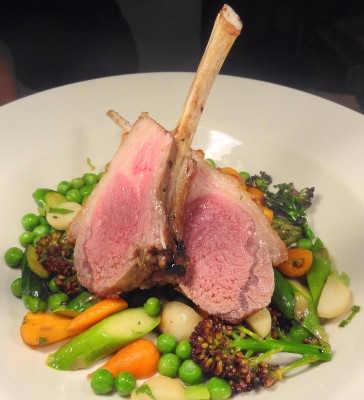 Mike Berry’s locally brewed Fynburys Cider is finally on, and the hand-pull on the bar is going great guns. The fruit varieties in the fridges are also proving popular – Blackberry and Nettle has turned out to be a real star. It’s a pleasure to be able to serve up such a high quality cider knowing it is made exclusively from Rutland apples. We can’t wait for the perry, apple champagne or brandy he is working on. Mike’s a cracking local producer whose attention to his product shines through and we see it in the faces of everyone who comes to try his ciders.

For the last 10 years, our own Jimmy’s Rutland Smokehouse has been producing smoked eel for the menu – the eels being a by-product of a commercial trout farm. Sadly, with the increased protection of their predators such as cormorants and otters, and the voracious ‘freed’ ex-fur minks, stocks are seriously dwindling. We have therefore decided that – to give them a chance – it’s time to call it a day. The smokehouse will continue to produce everything else such as beef bresoala, coppa, salami, bacon, sausage, black pudding and trout, with the focus on our local links. Seasonal specialities like venison bresoala or air-dried mutton will also be on our favourites list.

As expected the freshly drilled fields have seen a lot of pigeon activity, some of which we have now brined and cold smoked, ready for pan frying – well worth trying if you never have before. The baby beetroot that is on the way pairs up wonderfully with pigeon in a salad.

The King’s Arms at Wing is part of the Great Food Club recommended network.

James is head chef and owner at The King's Arms pub in Wing, Rutland