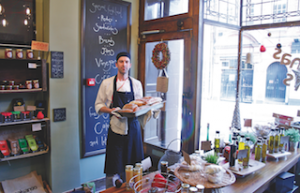 It’s 10.30am and a chef in full whites comes through the door carrying a basket of still-warm breads. This time it’s an inviting selection of sun-dried tomato, poppy seed and cheese and onion – but you might also find brioche, rye or a lovage seed loaf.

It’s a typical moment at this unusual deli, which makes more sense when viewed alongside Hotel Maiyango next door. A large proportion of the produce stocked at Leicester’s Maiyango Kitchen Deli is produced in its own kitchen at the neighbouring restaurant. It means that it can be both responsive to customer demand and focus exactly on what it does best.

“We avoided going down the road of lining the walls with jars of chutneys,” explains owner Aatin Anadkat. “That’s all just dead stock. Our approach is to vary things and replenish regularly in small amounts – you might call it limited-edition food.” The deli also wants its display to allow the beautifully packaged products “room to breathe”.

Right now the deli is not able to produce its own charcuterie or cheese, but Aatin doesn’t want to just buy it in to re-sell. “This place is about our own produce, lovingly made,” says Aatin. “That’s the joy of it. The chefs make some and when it’s gone, it’s gone. There’s less waste and that’s good business but it’s good on a moral basis too.” If some of those breads don’t sell they can be used that night in the restaurant. I’m trying not use the word “synergy” here – but it’s hard. 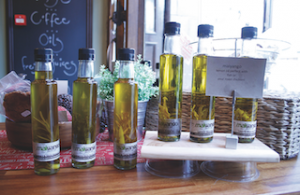 Having opened in the autumn of 2011, Maiyango Kitchen Deli fulfils a longheld ambition. The company felt there was a gap in the market and had been waiting for this particular bijou unit to become available. It was never just about retail, says Aatin: it’s an extension of the brand. “It’s about introducing ourselves to people who might find the restaurant too expensive. It’s about enabling everyone to take a bit of Maiyango home.” 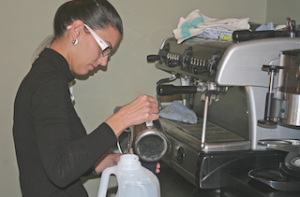 So while you won’t find some of the staples often found in delis there’s still an inviting array of foods. So far the bread, pretty tartlets, cupcakes and other baked goods have proved popular. Then there are olives, hummus, sun-dried tomatoes and so on, plus those limited edition, small batch jams, chutneys and flavoured oils. In December you could find the likes of pear, apple and cardamom jam, spiced celeriac, pear and date chutney, rosemary and garlic oil and saffron linguine. In the early autumn, a strawberry, chilli and vodka concoction did well, but despite strong demand it won’t appear again until the strawberries return. 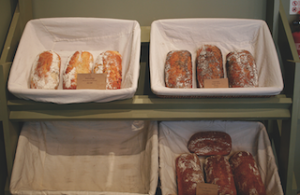 Then there’s catering for the lunchtime trade. The fatly-packed sandwiches also follow some of the seasonal produce being used in the restaurant – if ham hock is on the menu, it may appear in a sandwich.