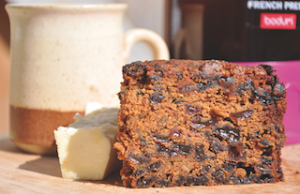 Ale used to be brewed for farm workers, and in our farmhouse in Croxton Kerrial, Leicestershire, it would have been prepared in the ‘wash house’ using the copper tub, before being piped into the dairy cellar to mature. This strong thirst-quencher would have been drunk in large quantities during harvest.

On September 13, 1992, a potent ale recipe was given to us by our farming neighbour, Ann Botterill – I know because the date is still written on the tatty sheet of paper. We have made the ale many times and the result has always been great for both drinking and cake making! It was entertaining having to explain to visitors why the house smelt of beer!

The Guardian newspaper originally commissioned this cake and after a good deal of experimentation, six were sent out to the BBC Radio 4 Test Match Special team in the West Indies. I gather they were well received. The ale cake was also included in our cake series recorded in our farmhouse for Radio 4. 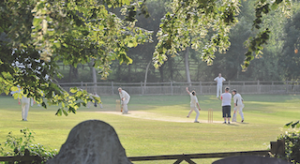 Incredibly flexible, an ale cake is excellent served with coffee, great eaten with cheese, or topped with cream or custard. What more could you ask of a cake? 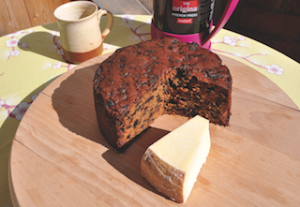 1 Steep the fruit and peel in the ale, leaving it for at least two days, stirring occasionally.

2 Using a hand mixer, cream the butter and sugar until light and fluffy. Stir the treacle and malt into the eggs. Using the mixer on slow, add the flour, ground almonds and spice, together with the eggs, until thoroughly mixed.

3 Stir in the steeped fruits and pile the mixture into a lined 20cm/8in round cake tin. Bake in the centre of a preheated oven at Gas Mark 1 (140C) for 21/2 to 3 hours, until a skewer inserted into the centre comes out cleanly. Because of the quantity of liquid used in making this cake, it may take a little longer to cook thoroughly, but don’t worry, this is perfectly normal. Allow the cake to become cold in the tin, leave on the baking paper and wrap in foil.

4 This cake improves if it is left for two days before eating, to allow the flavour to develop.

NB. Please note that ovens vary considerably so the time taken to bake can differ. 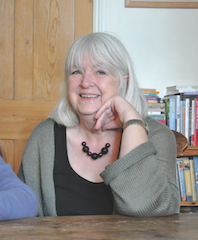 Julie Duff runs Church Farmhouse Cakes of Croxton Kerrial, Vale of Belvoir. She has written several books on cake making including Cakes: Regional & Traditional, which is available on Amazon.