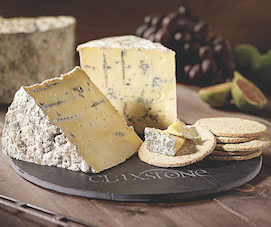 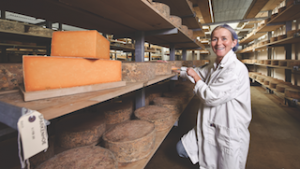 Now Leicestershire’s Long Clawson Dairy has released four cheeses under the name Claxstone, the old name for its home village. The range includes a new Blue Stilton, a Shropshire Blue, a Claxstone Smooth Blue (pictured above left) and a six-month matured Leicestershire Red. Within weeks of release, the Smooth Blue won the Supreme Champion Prize at the National Cheese Awards at the Royal Bath Show.

New from Stilton rival Cropwell Bishop is Beauvale, a creamy blue in the style of a Gorgonzola or St Agur. Production is currently on a small scale – up to around 15 cheeses a week – and only a few selected outlets are stocking it at this stage, including the Melton Cheeseboard, Gonalston Farm Shop and the Cheese Shop in Nottingham. 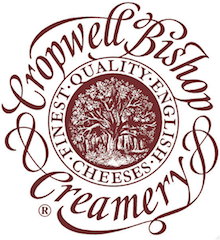 Georgie Mason, director of Gonalston Farm Shop in Nottinghamshire said Beauvale was flying off their deli counter: “It’s creamy, addictive and people are loving it. The dairy has spent years perfecting it and I think this is going to be a great cheese for the future.”

Lincolnshire’s Lymn Bank Farm has launched Skegness Blue, a departure from its well-known range of flavoured Cheddars. Cheesemaker Stephen Grinstead said: “It’s gone well in the trials and we’ve come up with something that is slightly creamier and less blue than a Stilton.”

The new cheese should be followed by Skegness Gold, a traditional clothbound Cheddar.