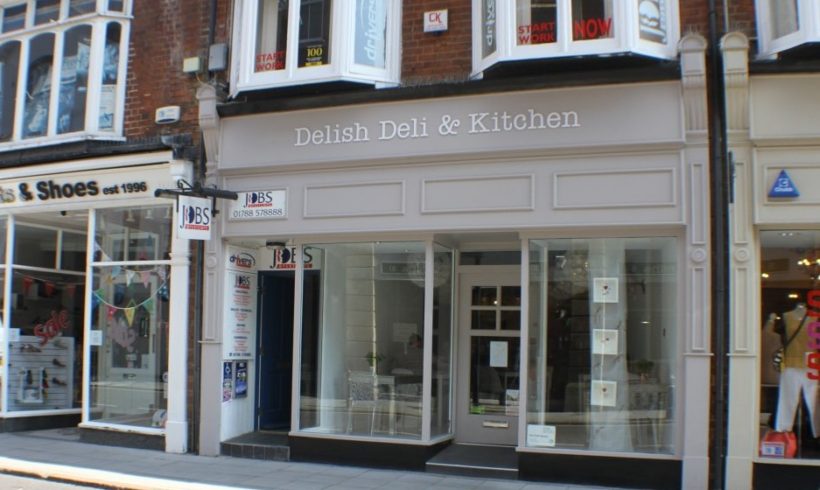 When Delish Deli in Rugby first opened, it was a space-age style IKEA-decorated cafe with an array of salads and snacks laid out on the counter. The food was good, but somehow the ambience didn’t feel quite right.

Today it feels like a completely different place. The white futuristic plastic furniture has been replaced with rustic wooden tables and chairs, and the owners have added touches like stylish wooden boxes for cutlery and sauces. It feels cosy and a bit vintage. There are still the tasty treats on the counter, and the homemade breads supplied by the Revel Bakery in nearby Stretton under Fosse. And the menu of brunches, lunches and treats is even better in my opinion. 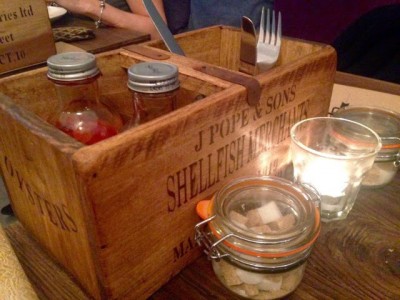 With a slight American feel, the menu includes brunches, from full English breakfasts to eggs Benedict, omelettes and various breakfast-based sarnies. For the rest of the day there’s an imaginative range of flatbreads, bagels and panini, as well as burgers, main courses, and other snacks.

For the ‘bread-based items’, there are some of the classic flavour combinations that you’d expect, along with some interesting additions, like a brie, ham and fig relish panini or a ‘New Yorker’. Hot sandwiches include a pulled pork pretzel roll, a salt beef hash sandwich on a salted pretzel roll or the ‘Ultimate Grilled Cheese Sandwich’. Tempting.

The burgers not only sound impressive, but look it too, delivered on their own board skewered with a knife to hold them together. And then there are the US-style main courses of the ‘Delish Mac & Cheese’ or homemade brisket chilli.

They also have a weekly specials menu, from different flatbread toppings, to burgers of the week. On my recent visit, there was a yummy looking ‘Avocado Smash’ of crushed avocado with feta and chilli on toasted sourdough topped with poached eggs and the option of added bacon.

We’ve been to Delish a few times now and haven’t been disappointed. I’m sure we’re not alone, since it’s often full. The order-at-the-counter system keeps things casual, with the helpful staff bringing your food out. The last time we went, it seemed to be a bit chaotic, with a few mixed-up orders. But hey, these things happen. The odd ‘off day’ can happen to the best of restaurants, and it’s certainly not unforgivable in my view.

In the past, Mr Manning and I have both tried the flatbreads – thin, crispy pizza-style bread with all sorts of great ingredients piled on top. Mr M’s favourite is the goat’s cheese, red onion marmalade and rocket, which was delicious but a bit too rich for me. I went for a special of the week, chilli beef flatbread – the same light bread with brisket chilli stacked on top, followed by melted cheese and peppery rocket. 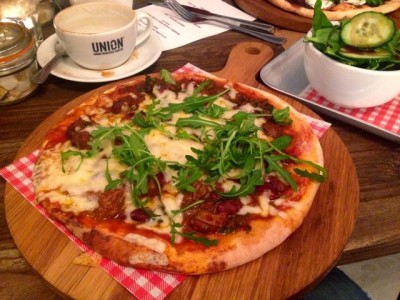 My love of chilli shone through on our latest visit, when I opted for the brisket chilli served with homemade wedges. Forget the kind of minced beef that dissolves into a mush, never to be recognised as meat again. The brisket was tender, tasty, but still noticeably beef. It had obviously been cooked for a good long time, and while it wasn’t the spiciest chilli I’ve had, it was full of flavour.

Jamie felt he couldn’t ignore the burgers on this occasion, so chose the Delish Burger – steak burger in a brioche bun, with Red Leicester, tomato, burger sauce, and dill pickles, served with wedges and some of Delish’s homemade ‘slaw. The burger was an impressive beast. The classic burger garnishes of cheese, sauce and pickles accentuated the flavour of the meat. We agreed that, with a patty of this quality, we would have been happy for it to be cooked slightly less and a tiny bit pink. But you have to acknowledge that not everyone likes their meat cooked like that, and small establishments can’t always cook to order. Either way, it still tasted good. In a nice touch, the coleslaw comes served in a kilner jar and was far better than your average wholesale-bought slaw you so often find dolloped on the side of your plate. Instead it was fresh and crunchy, not too full of sickly mayonnaise, and with a noticeable aniseed-y fennel tang.

As we sat, we saw some good-looking dishes come out of the Delish kitchen, including cinnamon toast and a tempting snack of a mini pot of local rare breed sausages. Judging by the rapid turnaround of tables, interest in Delish isn’t dying any time soon. They’re producing an appealing and interesting selection of decent, reasonably priced meals, using locally-suppled produce. Long may it continue.

Ellen Manning lives in Warwickshire and writes the food blog, Eat With Ellen