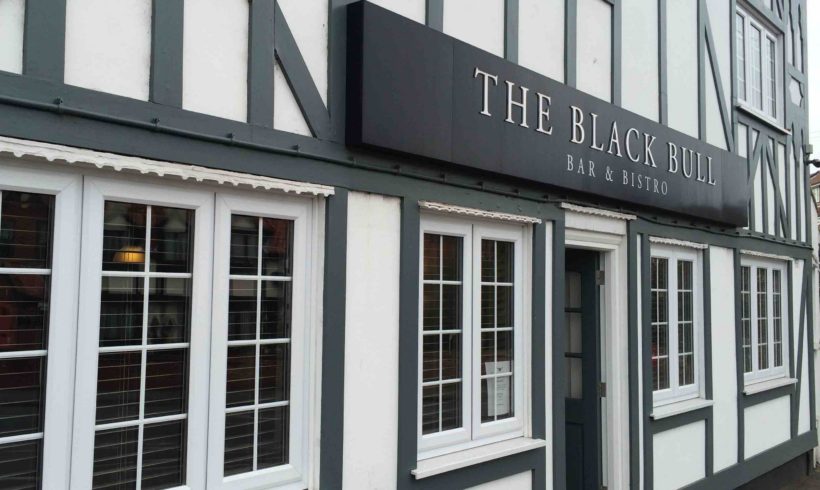 Hold onto your hats, folks. I am about to break with habit and give a positive review. Like Craig Revel-Horwood on Strictly, I keep my high scores for when I am really impressed.

Having driven through Blidworth many times, I would not have placed confident money on finding that impressive meal there. The main drive through Blidworth goes past four pubs, three of which have spent much of the last half decade either closed or on the verge of being shut down. Only the frankly bizarre Bird in Hand, with its spectacular views, scampi and pig racing, has remained open throughout, and if that is the barometer for staying successfully open in Blidworth, it does not suggest that a gastropub venture will fare any better. 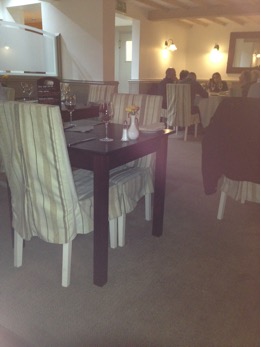 The Black Bull is in a longstanding village pub; in fact, given it was the second building to be erected in what is now Blidworth, it can be argued that Blidworth is a pub village rather than the other way around. Such buildings really matter to some people who live in villages steeped in history, and it can hurt to see them fall into disrepair. We’ve all seen TV shows where people puffed up with passion decide to take on evidently well-intentioned but ultimately doomed renovation plans, watching their gradual exhaustion and financial demise with a grave sense of inevitability. What would you make of the couple who lived opposite the Blidworth pub who, instead of resting into retirement, bought the rundown pub across the road and, with no experience, decided they could transform it into a well-mannered, relatively high-end dining pub? If you, like me, suspect you would have been hurling your vocal opinions at the TV, then, should the story of the Black Bull at Blidworth have been televised, you would have had to eat your words. And so would I.

Open for just over two years, the Black Bull is, on today’s evidence, doing well in an unlikely location. The management remains in the family hands, with Peter Hall now running day to day operations. Tall, unassuming, softly spoken and distinctly from north Nottinghamshire, Peter was on hand throughout our visit, as was Elaine, who took the decision with her husband to buy the Black Bull in 2012. Much like the similarly targeted Four Bells in Woodborough, the staff in the Black Bull wear their own clothes and treat their customers in a friendly and courteous manner with no pretence. The decor is clean and smart rather than fashionable, with tables well spaced and pleasingly appointed with high-grade cutlery. We were invited to take our time and stay at our table for as long as we wanted; a large party who were on dessert when we arrived left at the same time as us, showing that our invitation was genuine.

We started with the wine list, which was excellent and fairly priced, although, given its depth and breadth, would have been improved by having more than two each from the reds, whites and roses available by the glass. In particular, only offering a sauvignon blanc and a pinot grigio leaves a large hunk of white wine drinkers who favour aromatic, oaky or tropical whites empty palated. We tried glasses of the Los Ganos Cabernet Suavignon (£3.50 for 175ml) and the Black Bull Merlot (£3.75); both were soft, rounded and freshly opened.

The menu is compact and has a strong emphasis on farmyard fare, with ingredients sourced from local producers where possible. On Sundays, a roast dinner menu is offered until 5:30pm, which we were too late for, although looking at our neighbouring table tucking into great flowers of Yorkshire pudding atop hefty slabs of beef, I almost wished we had been slightly less idle in getting over there. As an adult, I don’t like Sunday dinners, if that gives you an idea of how good the roast option looked.

None of the starters really sang to us; one of the problems of having a pragmatic approach to a limited menu is the replication of ingredients in the first two courses, so if I had chosen the massalla queen scallops with green lentils (£7.95), I would have been effectively replicating my main of roasted hake with dahl and a langoustine bisque (£14.95). Other menu issues: two of the dishes nodded towards the dreaded temperature-controlled bain marie (please make it go away) and vegetarians who don’t want soup followed by mushroom ravioli will struggle. Perhaps one more starter and one more main course wouldn’t go amiss. 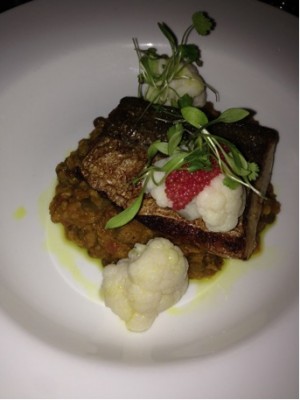 The hake with dahl

My main course of hake was a lovely marriage of meaty, salty fish cooked accurately with an excellent crispy skin and soft white flesh, and a dahl of green lentils that held their bite and felt the glow of a blend of warming and hot spices. Incidentally, the menu declared the lentils to be red, but green ones were definitely in there. The soft dahl needed to be matched with something mild in taste and relatively firm in texture, which is why tradition pairs dahls with rotis or chappatis, but hake does an even better job; it’s just not something one can afford every day, and so it is a proper treat and the sort of thing worth paying for. Cauliflower florets blanched for the briefest moment provided a further firming texture. The lumpfish roe was unnecessary and distracting. Roe is a delightful salty delicacy, and its colour is a boon for creative chefs, but here it simply did not fit with what was already a perfect dish. Eddie, the chef, should feel more confident, as his cooking really is smart.

My husband went for the ox cheek, braised in ale and served with horseradish dumplings (£15.95). Except that when it arrived, there were no dumplings, just mash. Hmm. Elaine was apologetic, and in fairness, we were eating from the evening menu on Mothering Sunday when everyone else was on the lunch menu; still, the chef should have informed the front of house before going ahead. The ox cheek was an exemplary chunk of squidgy meat, the mash smooth and the accompanying vegetables well prepared, especially the beautiful broccoli stems. However, the plentiful consommé needed the dumplings; mash cannot absorb such a thin sauce in a satisfactory way. And serving a consommé dish without a spoon? Cruelty! 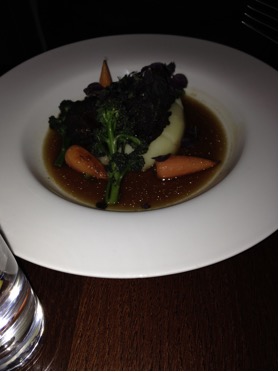 The dessert menu is a five item affair also, with a cheeseboard of good range. All the puddings were pretty filling options, and although I nearly plumped for the Bakewell Tart with clotted cream ice cream (£5.95), I had to admit defeat and go for a cappuccino; the coffee blend was pleasant, not challenging, although the foam was looking a little deflated. The husband went for the chocolate torte with orange sorbet (£5.95), the torte heavily dredged in sugar as though an ancient relic buried in sand. None of the declared candied orange was evident and would have been a welcome foil for the dense torte. Other options like fruit and nut rice pudding (£5.50) and chocolate banana bread (£5.95) seem aimed to put people into a Sunday afternoon sugar coma, and sometimes there is nothing wrong with that. Mostly on Sunday afternoons. 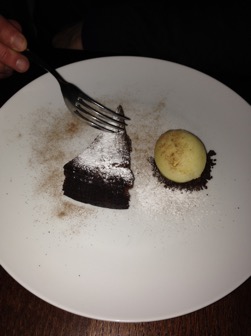 The service could be aptly described as lovely and homely in the best sense, as could the dining room. Blidworth might not be a chocolate box town, but this is a chocolate box pub, serving quality food. There are works in progress to create four bed and breakfast rooms, and whilst Blidworth might not be on your hitlist for holidays, a night cosied up in the Black Bull is mighty tempting on this form. My niggles are minor (if you have read my other reviews you will be well aware of my Kermodian rants on average meals) and I would heartily recommend the Black Bull for formal family meals, a pleasant Sunday lunch or a real treat for a traditionalist foodie.